What are potential avenues in advanced materials/manufacturing for light, high-strength parts for portable cannons, firearms and ammo, and armor?

In my setting, there's a faction known as International Front that combines guerilla and para-militarism with advanced technology (for a guerilla group).

Their main goal is to fight and conquer the whole world through soft power or military action, and they know that NATO and other conventional forces have the training and technology to defeat or at least suppress an insurgency in the developing world they operate in, let alone the developed world they seek to control in the future.

They have knowledge of advanced technologies from another world, contained in a device of theirs known as the "Book of All Things," but it's encrypted on a level that even teams of experts in cryptography can't break it, and its "ICE" is strong enough to brick the computers they used to install a rootkit.

However, the Book of All Things managed to get hacked open by an ally, and they have full access to the contents within for civilian and military technologies in a variety of fields.

One of those technologies is special type of compound that was used in the other world for firearm parts. It was a lightweight, high-strength material that's often used in a variety of firearm parts.

It could be used for barrel and bolt to lessen weight while retaining the ability to fire high-power ammo without breaking the parts or wearing them away with heat and pressure.

In ammo, it can be used for the case with flexibility modification to withstand larger amounts of powder without case rupture and firearm damage while weighing less than conventional brass, or as part of the bullet itself as a lightweight penetrator for short-range AP ammo that relies on velocity (not mass) to penetrate armor.

It has secondary uses in armor, where in a modified state to increase flexibility and resistance to spalling, it could be used as lightweight body armor plates or armoring for light vehicles to resist AP ammo from HMGs. It can also be used in planes (similar to titanium) to form the body, and does not require sourcing said titanium or special tooling to mill and form titanium.

International Front- once they have the full recipe- use this in a variety of applications. They use this to make a new service rifle based on the AK platform that takes advantage of the material to overcome the AK's limitations.

They start mass producing MANPACs- man-portable autocannons- that can be wheeled like a PM 1910 machine gun and used like a super-HMG against enemy light vehicles and armored fortifications with effective hard-core penetrators that don't require sourcing tungsten and DU. They also start making AT guns like the Sprut-B anti-tank gun that move faster and weigh less making for easier logistics.

Finally, that material lets them start planning for an air force with their own domestic designs and doctrines, planes that aren't copies of the outdated Migs and Sus with the technological limitations of the Soviets, allowing them to counter the air superiority of enemies with F-15s, F-16s and the like.

With all this said, what kind of materials or manufacturing techniques would I be looking at for that kind of lightweight, high-strength wonder material?

Graphene has amazing tensile properties, and is extensively modifiable. So why don't we use it? Graphene can just do about anything except leave the lab. It's very fiddly to handle and very expensive. The aliens have a cheap and effective way to make it. This allows you to make extremely tough armor from raw carbon.

Aluminium is a very good explosive if you can get it to explode. Graphene nanoparticules allow this, letting you get more bang for your buck. This means you can make more powerful guns with it.

You want a magic material for bullets that make a rifle round shoot through a tank. The problem is, even if you have such a material for the gun and bullet, it will still go plink against the armor.

Why? Because the bullet was not heavy or fast enough to penetrate.

The limiting factor is not the bullet material, but the amount of propellant. Cartridges are already mostly propellant. 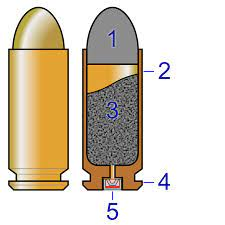 The bullet (1) is what comes out the gun. The rest (3) is full of gunpowder. If your bullet material can withstand 10 times more force coming out of the barrel, then you need 10 times more propellant to make it go ten times as fast. So the cartridge needs to be 10 times the size and you cannot fit it inside a rifle.

Cementite is iron carbide: FeC3. It is real.

The name cementite originated from the research of Floris Osmond and J. Werth, where the structure of solidified steel consists of a kind of cellular tissue in theory, with ferrite as the nucleus and Fe3C the envelope of the cells. The carbide therefore cemented the iron.[3]

...This is because (cementite) is hard at ambient temperature, as we shall see, due to its crystal structure that has a much lower symmetry than all the forms in which the iron occurs... The longest single-span suspension bridge in the world, the Akashi-Kaikyo Bridge, utilises exceptionally strong ropes to suspend the deck. The bridge connects Kobe with Awaji Island and has a span of 1.9 km between the towers. There is enough steel wire used in the bridge to circle the earth seven times, with the bridge being designed to withstand an earthquake of Richter 8.5 magnitude. The bridge represents a magnificient triumph of engineering and steel containing substantial quantities of cementite, without which the ropes would be nothing short of feeble...

I was hoping to find the full text of the Floris and Werth but no luck yet.

Your special metal is cementite: iron carbide. The difference is in the structure of the cemetite: hexagonal (possible real) instead of orthorhombic. Also as opposed to typical cementite which contains more iron within the shell, within the cementite shell of your metal is nothing (made up for this idea). This markedly reduces the weight at the expense of long term stability - as opposed to millenia this form of cementite has a half life of a few years.

The manufacture of this material is partly biological (iron biochemistry is real though not with cementite AFAIK), laying down the iron carbide matrix around a protein core which arranged the atoms appropriately and is then digested.

The cementite particles in powder form are then cold pressed (cold pressmetallurgy is real) into the desired shapes.

6
Using depleted uranium ammunition in handheld guns?
4
What material(s) should I use to protect my androids against ballistic impacts (bullets) and what protection would I get?
4
Idealistic Suppressor Technology's Effect on Warfare
14
Armament for airships filled with non-flammable gas
6
What materials can be used to make a humanoid skin warm?
2
Could yet unobserved baryons constitute useful building materials?
2
Is it possible for a metal like the Skarilium of my works to exist naturally while also being obtainable for humans in the near future?
9
What are potential avenues for firearms and weapons technologies for a biotech-centric species?
2
In a world like the one described, in what kinds of environments could a metal like Skarilium occur naturally?