What color would a neptune like planet have around an orange dwarf?

Let's say we have a Neptune like planet orbiting around a k5v orange dwarf star. The planet is about as massive as Uranus but its atmosphere contains a large amount of methane. Based on what I have read from other sources, methane is what gives planets like Uranus and Neptune its blueish colors. Distance from the star also plays an important role, since the more sunlight methane recieves the more orange in hue it becomes, which explains why Uranus is more greenish than Neptune. Now, my planet orbits a star with a luminosity of 0.17 and a temperature of 4,440 Kelvin. Based on this diagram: 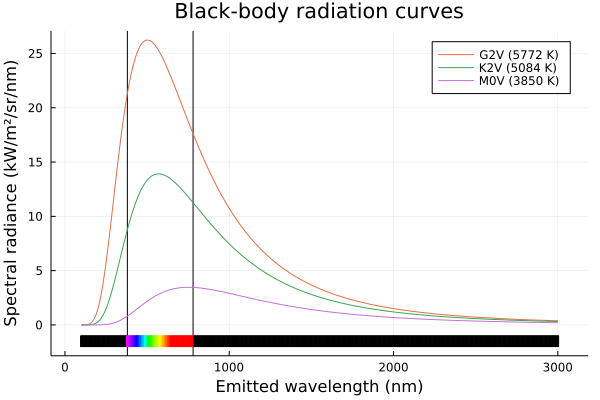 I assume that most of the star's light shines somewhere around the yellow area of the spectrum (I am not sure, please correct me if I'm wrong) and so the radiance of the blue color would be much smaller than the Sun.

Amyways, to sum it all up, assuming the planet is about 26 AU away, what color would it appear?

(Note: the image used doesn't belong to me)

In fact what makes the Uranus color a bit less blue than it's sister Neptune is the presence of haze (way thicker on Uranus upper atmosphere). Without this haze, both planets would have the same color.

Now the question is : why does Uranus has a larger layer of haze? Well a paper from Irving & al is making the assumption that the turbulent atmosphere from Neptune is more efficient at getting rid of methane snow (codensation). Which does in fact not help your question but it was to demonstrate that the distance does not impact the color difference between the two sisters.

To give a bit of a response: it definitely depends on the methane depletion. Few studies from Molaverdikhani & al are investigating the effect of irradiation and clouds on methane depletion which could be useful for you. The fact is the methane depletion is related to the flux the planet receive, but also the Carbon to Oxygen ratio. It doesn't seem to be fully understood the effect of the radiation on the exact behaviour of the CH4 in the atmosphere but from what I learnt, methane seems to go deeper in the atmosphere with less radiation from the stars which could impact the absorbtion spectrum and so give a less blueish teint... (for a Neptune like)

I know I don't fully respond to the question but plenty of phenomenom in the Neptune atmosphere are not understood yet and the impact of solar radiation on the composition is one of them...

To add a bit more information, the fact your star is definitely less luminous and has a bigger part of its spectrum in the orange would make your Neptune darker possibly. What I would suggest is create a darker Neptune, blue and a bit green-ish. Which could be explained with the H2 and other volatil component being higher in altitude than the CH4... Hope that help.

You're treating the planet like its reflectivity changes with the spectrum of light thrown at it. That's not how reflectivity works. An atmosphere that reflects blue will always reflect blue.

An argument can be made that should the star have less blue to reflect then other elements in the atmosphere that reflect other colors might stand out more. But remember, we're talking about an atmosphere like Neptune's, and whatever elements may be in its atmosphere, the greatest reflected wavelengths are the blues.

So, without going through all the gory details about the percentages of various gases and dust particles, their reflective spectroscopy, and the spectral distribution of the star—I'm pretty confident that your planet will look blue.

Even the shift in luminosity isn't an issue. Less light won't mean less blue. It only means your cameras need better light compensation.

The truth is, star color has much, much, much less to do with what color an object presents to an observer (with the exception of a mirror) than does the spectral reflectivity of the object. To wit, if an object only reflects the 460 nm wavelength of light (blue), then it doesn't matter what the source light's spectral composition is. You'll only see the 460 nm wavelength of light because that's all that's being reflected.

2
Orbital period of a tidally-locked Earth-like planet around a red dwarf
33
Terrestrial Exoplanet Skies – I've Built a Visual Sky Chart. Is it Correct?
26
How can a planet have a deadly eclipse-like "spotlight"?
5
Would plants on a planet orbiting a star like ours, have any different color?
8
Orange Suns and Blue Jupiters
6
What does a gas giant close to a red dwarf look like?
5
Could this planet's tail be visible?
4
What would the atmosphere of the Archaean Earth look like? (Before massive oxygenation)
2
Appearance of an Ammonia World's Atmosphere
4
How close the the star should i place my lava planet?