What would modern color wheels look like if the human eye saw fewer/different spectral colors?

The typical human eye can see wavelengths between 350nm and 750nm. In 1666, Isaac Newton used a triangular prism to split a beam of white into a rainbow and then define the first color wheel. 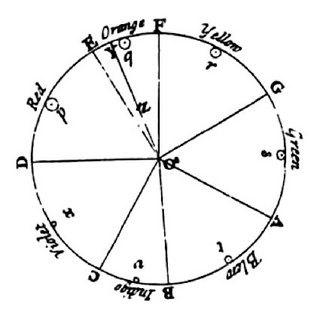 Fast-forward to modern times, most color wheels we find in graphics editor software look something similar to this: 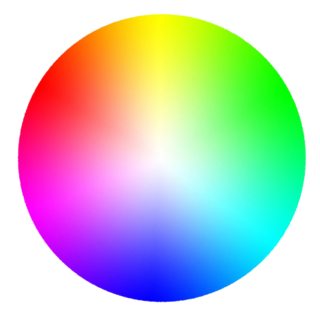 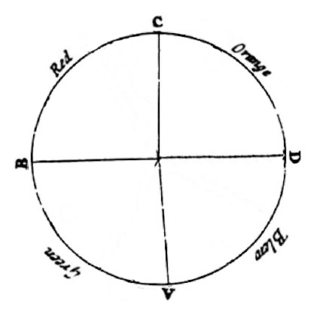 Ignoring any evolutionary reasons for this to happen, how would their modern color wheels look?

Edit: For clarity, I'm considering that Iseec Nawton saw fewer colors. If the change in order makes this question impossible to answer, I'm okay with changing it to Red, Orange, Blue, and Green. 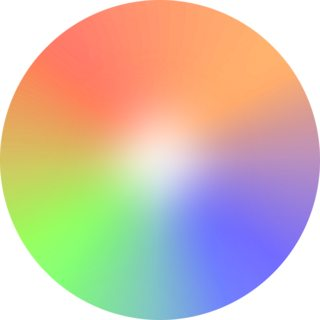 Newton didn't dispassionately identify seven colors in the wheel in the manner of a good scientist. He divided the wheel into seven parts because he believed (wrongly) that there was a connection between colors and the heptatonic musical scale. Two of the color wedges are half as wide as the other five because the heptatonic scale has five whole steps and two half steps.

Here are some reasonably accurate images of a spectrum:

(They are against a gray background because it's impossible to represent spectral colors in sRGB without mixing them with white. You should mentally subtract out the background.)

Judging by these images, if Newton had been mystically predisposed to see four colors in the spectrum, they plausibly could have been red, orange, green, blue (in that order). In that case, modern color wheels would be no different, since they aren't based on Newton's musical model.

If he'd wanted to see seven colors in Daron's color wheel, he could have done that too. (I see red, orange, violet, indigo, blue, green, brown.)

It's hard to know how to interpret the switching of green and blue. It could just mean that the English words are different and everything else is the same. It could mean that the green and blue qualia are swapped, but it's hard to know what that means since we don't understand qualia. We don't even know that different people are experiencing the same qualia when they say that they see green or blue.

24
How would the human body develop under a different gravity?
23
What would ammonia snowflakes look like?
7
What would a village built out of human remains look like?
4
What would sports look like if human beings could fly?
4
What would it look like to build a human?
4
Would a human brain with 50% fewer neurons but 50% more dendrites be as intelligent in modern society?
6
What skin, hair and eye colors would people living under different stars have?