Is it possible for a metal like the Skarilium of my works to exist naturally while also being obtainable for humans in the near future?

In some of the universes featured in my works, a material known as Skarilium exists. This material is used by humanity, in a universe where we’ve successfully colonized the majority of Mars and are in the process of colonizing other planets in the solar system, as armor plating on fighter jets that double as spacecraft.

Skarilium has the following qualities:

P.s. I’ve been informed that the above example of how lightweight Skarilium is would make it lighter than Earth’s Air is at sea level. I did not intend for it to be lighter than air. For better reference, it is meant to be more lightweight than the lightest metal in real life, but is not as lightweight as air.

The material is lighter than air.

This is a fairly impressive feat for a solid substance. You haven't changed the volume and weight, so I assume this still stands.

It's stronger than the strongest substance on earth.

It's more heat resistance than the toughest substance on earth, Tantalum hafnium carbide alloy, which has a melting point of 3990C. The outer core is 4500C plus, so this material is very heat resistant.

If you want the material, it would have to be some sort of magical sci fi material with impossible properties. You could have it be the result of some alien experiments with altered physical laws, say.

Your colonists harvest diamonds from the diamond layer on Uranus and Neptune. 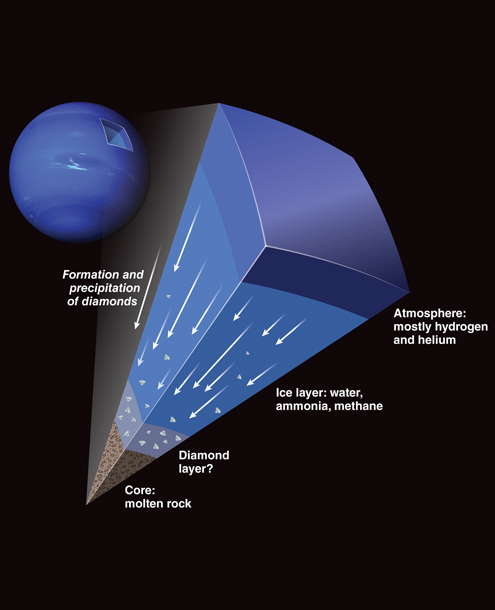 Very large chunks are obtained and processed into the desired shapes. The processing method is owned by Skarilco and modifies the diamond into Skarilium™. The exact method is a trade secret but involves doping the native diamond with boron and other elements.

With your new requirements, something like an Al-Ti-Cr alloy may come close to satisfying your needs.

The exact density depends on the precise composition, however with Aluminium at about 2700kg/m³, a density of 3150 seems believable.

The outer mantle has temperatures in the range 300-1000 celsius. And these alloys can maintain strength up to about 800 celsius. Now although they can retain strength, the rocks in the mantle are under considerable stress, You won't be able to make a chamber in the mantle. Nothing can withstand the force of 100km of rock crushing it. And even if these alloys can maintain strength, they still conduct heat. Again, you won't be able to make a tunnelling "Mole machine", or a supervillain underground base!

These alloys won't occur naturally, they will be produced in the lab (or factory) the specific properties are not just dependent on the composition, but the treatment of the metal as it is heated and cooled, rolled and worked.

7
Is it possible for humans to evolve to eat something like wood or stone or something similar?
25
5 million years in the future and Humans are still the same: how is that possible?
2
Is it possible to speed up the moon's orbit with today's, or near-future technology?