I designed a Maglev space propulsion tube on Mt. Everest. Do you see any issues with it?

So, I designed a mass driver on Mt. Everest.

The mass driver is powered by "PERMANENT" magnet rings with a strength of 5 teslas each (the black lines in the tube). The mass driver then climbs up Mt. Everest, extending 30km into the atmosphere, where air is extremely thin. A large low-pressure hydrogen balloon is used to lift the heavy tube, so as to prevent it from sinking to the ground. The tube is about 500km long, so as to prevent instant crushing accelerational forces

Would the mass driver be able to propel machine payloads or even passenger? If no, then why?

Do give me some opinions on this idea. 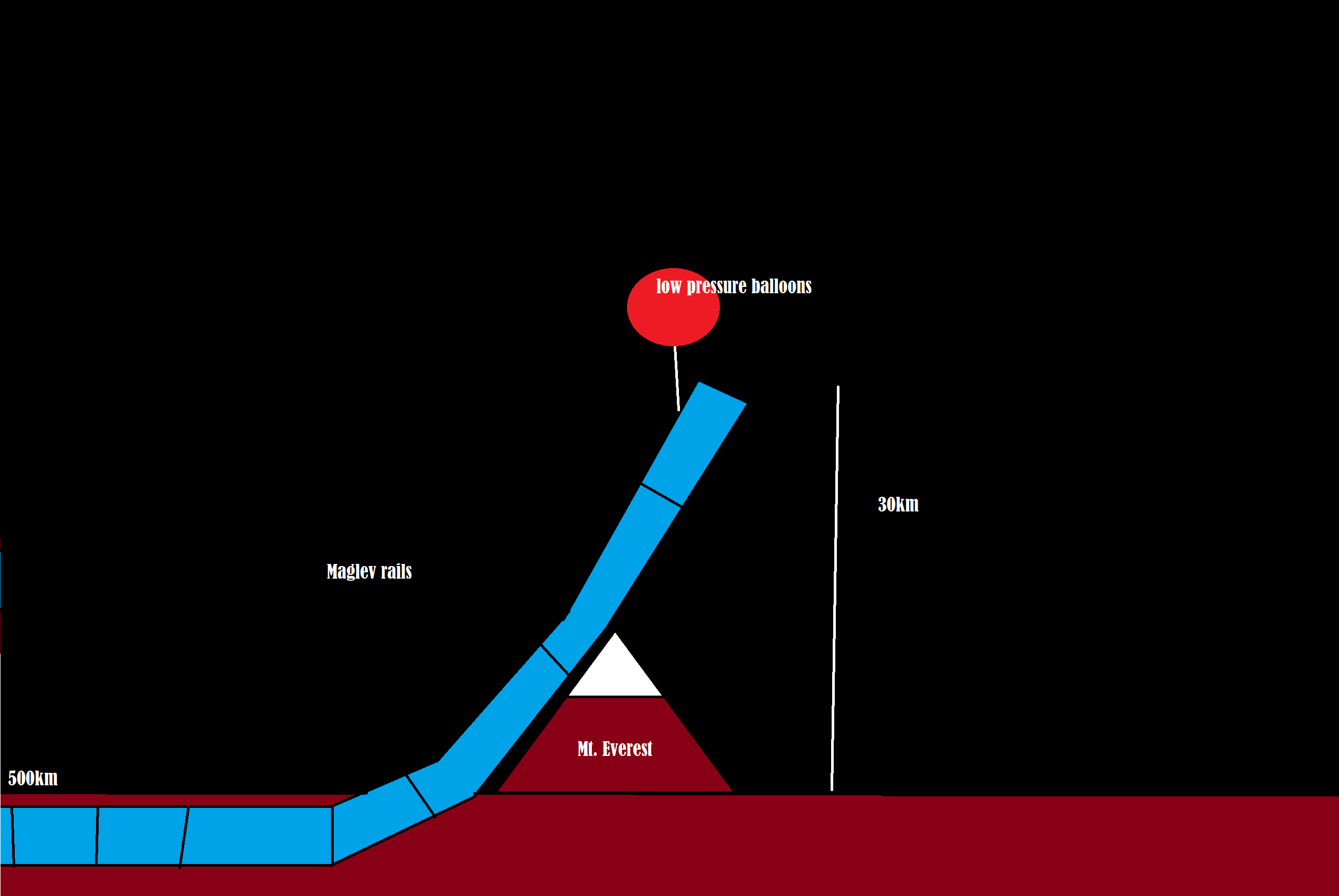 You'd be very much ahead to choose a somewhat lower mountain that's on or very close to the equator, rather than choosing the highest mountain many hundreds of kilometers off the equator.

First, the closer you are to the equator the more of your orbital velocity you already have just standing on the ground. At the equator, this comes to about half a kilometer per second (out of a total of around 8 km/s minimum orbital velocity requirement) -- very significant.

Second, most places you'd want to go once in orbit are easier to get to if you're already in a low inclination orbit -- the Earth's axial tilt is already more inclination than you want, but you don't have launch windows of minutes per day (or worse) if you launch into equatorial orbit vs. launching at higher inclination (Florida is bad enough, Kazakhstan is terrible, and Everest is a little further north than Canaveral).

Chimborazo, in Ecuador, is a far better choice. Not only is it actually further from Earth's center than Everest (due to Earth's equatorial bulge), it's practically on the equator, and it doesn't stand among dozens of other similarly high peaks, so it has a much clearer run-up for your maglev launcher.

Beyond that, another answer has indicated why the long, balloon-supported extension to the vacuum tunnel is a bad idea; better to simply have a series of timed doors to minimize air entry into the evacuated tunnel while the vehicle passes, and end the tunnel at whatever point it's no longer practical to support it on the mountain.

Also, don't forget your launched vehicle will still need some amount of rocket propulsion and active guidance, because even if launched at greater than orbital velocity, its orbit will still intersect Earth's surface (never mind significant atmosphere); it will need to have its perigee raised before it completes a single orbit else it will come back down like a Falcon 9 with a second stage ignition failure.

This also solves the problem of impacting air (even at 30 km altitude, never mind the 6 km actual height of Chimborazo) at 8 km/s -- you just don't. It's easy enough to toss your payload above the atmosphere, and only requires a couple kilometers per second instead of the whole 8 km/s. Once near apogee (over the mid-Atlantic, give or take) the "second stage" fires to finish the job of putting the payload into orbit. You've save the cost of a booster -- but watch out, SpaceX didn't have to build hundreds of kilometers or evacuated tunnel and thousands of superconducting magnet rings to do the same...

As noted in comments, you'll need to delete the upward curve near the end of the tunnel; it would produce more G load than the launch itself, and at right angles (one direction is far easier to deal with than two). If you launch at "only" 2 km/s, however, you need a lot less tunnel -- at 3 G, it would be just over a minute of acceleration, and require less than 70 km of tunnel; this could be virtually straight from near Guayaquil to the mountain peak (though that would be one heck of a trestle, even if the entry port was quite deep underground).

So is the tube evacuated in some way? Air pressure at 30 km up is very low but air will still get into the tube and will fill it up. If it is evacuated then there would need to be some form of barrier on the end of the tube to stop the air getting in. Any such barrier would be punctured by the projectile leaving the end of the gun and at that point the orbital velocity projectile would hit the air outside. At such extreme velocity even the very low pressure air at 30 km up would be like hitting a brick wall. The projectile would do reentry in reverse and would lose so much energy that even if it didn't burn up completely it would never reach orbit.

Everest has 100mph+ winds and any kind of crazy giant balloon and 30km tube will be blown to destruction very quickly.

This is something that's been explored already, known as a rocket sled launch. You don't need to extend the tip of the launcher up so that it's unsupported by your mountain, you just need to make the sled go faster - and that's a lot easier when you can provide power from the ground.

As for your propulsion method, I'd suggest looking at how maglevs work - they don't use rings of fixed magnets like that. I think the design you're using is somewhat inspired by a coil gun mixed with a maglev, in a way that won't do much. The primary difference is that a coil gun uses electromagnets that turn on and off in sequence, kind of like a magnetic bucket brigade; with fixed magnets, it's like a person in the bucket brigade refuses to hand the bucket off to the next person.

Marshall T. Savage's inspirational book The Millennial Project: Colonizing the Galaxy in Eight Easy Steps goes into great detail about this in its BIFROST chapter, which describes such a space launch tube using Mount Kilimanjaro as its base. One drawback that he glosses over is that the cargo is required to undergo an acceleration of 225g for two seconds mid-launch, which strikes me as too much for human passengers to survive.

This book was written in 1992, but you should definitely read it -- as others have pointed out, your proposal is completely unrealistic, whereas BIFROST is simply wildly optimistic. It seems to be available as a free PDF download, but I haven't tried that, as I don't know if it's legitimate.

The biggest problem with reaching orbit, and the one where most of the energy of the launch rockets go, isn't with the height, but with SPEED.

You need to go freaking fast to stay in orbit.

You need to so fast you are falling sideways instead of down. That's why astronauts float in the ISS, by the way.

Even if every other problem pointed in every other answer is solved, a maglev tube won't give its payload the speed necessary to stay in orbit.

This design presents several challenges. Some miraculous engineering could solve many of them. Simply evacuating the air from a 500km long 6km diameter tube will require enough power for a small city. Structurally stabilizing a 12km diameter balloon so that it takes on a spherical shape (rather than the natural inverted teardrop) will require discovery of previously unknown materials to manage the tension involved. There are also the logistical challenges of bringing resources to such a remote and sparsely populated location. Oh and weather, some of the worst on the planet. All of which I do believe talented, determined, and inspired engineers could overcome.

What I don't believe is that Nepali officials would ever zone you for this. They have a tourist site to protect.

Eh, you can stabilize the structure by turning it into a active structure. https://en.wikipedia.org/wiki/Active_structure Still gets you into a sort of trouble though. Atmosphere provides tremendous resistance to the type of acceleration you want to go. So it needs to part ways.

Lucky you we are starting to have that technology. What you need is a vacumed tube, a laser lightning rod and some pretty powerfull capacitors. The laser lightning rod, produces a plasma channel upwards, thorugh wich your lightning surges, producing the same vacum tunnel that claps when thunder strikes.

And through all that comotion, your capsule races spacewards. Only problem left is the acceleration speed up, which has to be linear < 3g to be survivable for normal humans, with no sudden breaks or tumbles.

Yes, I see an issue that hasn't been explicitly addressed in the previous 10 answers:

The environmental impact of building the tunnel would be enormous, as would sucking it vacuum be, every time there is a launch. Human engineer have never-ever built a 500 km anything, let alone a vacuum tunnel, let alone one that goes STRAIGHT for the entire length, and surely not a vacuum one. The CO2 foot print might be totally offsetting the footprint of rockets.