Can I have a very dense asteroid belt ring around a star?

I'd like to have an advanced civilization that lives in a ring around their sun, but a ring planet just can't work. In this case, they are among densely agglomerated asteroids (with life support, there's no atmosphere or anything) about as far out as our first asteroid belt, and have built bridges, etc. between the asteroids, many of which have been hollowed out for habitats.

Could there be a 'thick,' densely packed ring of asteroids that form a belt around the sun, or how long could that last. Could they be orbiting in a manner that keeps them from clumping together at least for a while? I'm imagining the distance to be like something out of Star Wars, whereby they have managed to stabilize and bridge those rocks.

The intent is to have a continuous civilization (could be far-future human) in a ring around a star. A ring-planet that is not the inevitably impossible ring-planet. The geography is flexible, but to keep it scientifically possible (it might not be), I'll venture a ring of large rocks the majority of which range between 10-20km of size, and several times that distance between each other.

The very basic question (hence the science-based tag), is if this is remotely possible. It sounds like it won't be, at least around a star.

EDIT2: I wonder, if I reduce the size of the rocks to mere meters (e.g. - 20m diameter) orbiting, if it allows for bouncing off each other, but remaining dispersed such as this, for at least human scales of time, say 30,000 years. If this introduces a new question, please let me know, and I'll remove this edit and add a new question. 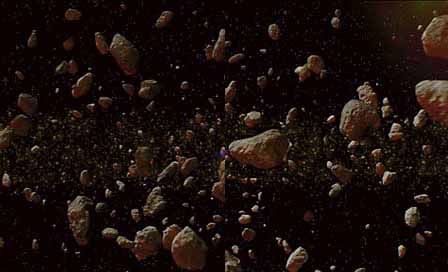 In our asteroid belt the distance between asteroids is, on average, about 2 million miles and its entire mass is about 4% that of our moon.

The solution is to have these aliens inhabiting a ring system of a planet. Saturn's rings, for instance, are made up of rocks that are on the order of meters apart.

No. Not like in the picture. Even Saturn's rings are usually enhanced for dramatic effect when shown up close in movies. The real universe is really sparse and boring.

The asteroid belt in our solar system is a good example of an actual astroid belt around a star. Some people say that it was created by two planets with intercepting orbits smashing together. The asteroids are so far apart that you cannot see two of them at the same time with the naked eye. The real universe is not going to deviate far from here.

If you want a dense ring like that to live on you'll need to go within the Roche limit of a degenerate body.

Not the answer you're looking for? Browse other questions tagged science-based astronomy .

9
Are islands flying in space possible?
13
How could a dust cloud form around a middle-aged star?
1
How to naturally maintain a Earth-sized Planetary Ring System and the possible periodic bombardment that can ensue?
4
Theoretical: Habitable planet in a binary star system
9
Could you turn the asteroid belt into one giant full spectrum interferometer?
17
How long would it take a civilization to see and understand a Dyson ring?
1
What atmospheric composition do I need to sustain Earth-like temperatures at my planet's orbital distance; how close should my asteroid belt be?
3
Rotation period of a planet around a star (sun)
11
How long would this eclipse last?
4
What Would Happen To A Dyson Swarm Without Maintenance?