This is my first question in the series "Saturnian Cloud cities". The second question is Ice Harvesting planes

My cloud-city is centred on a low altitude region just below Saturn's cloud tops, and it is lifted by a hot hydrogen balloon, which is heated by graphene cables that are many miles long and dip into the cloud tops to harvest geothermal energy from Saturn's interior. Electricity is harvested by massive wind turbines which spin under the intense hurricane-force winds of Saturn, which is then used for artificial lighting to grow algae and plants for oxygen and food.

The copper weights hanging at the bottom of the cables, weigh the airship down, which can be lifted barely by the hydrogen airship, but cannot be moved due to the sheer weight. And since copper and graphene are good electric conductors, the weights can transfer them to the cables. This would allow the balloon to stay still and not negate the wind energy.

Can this concept for a cloud city on Saturn work?

A diagram for reference: 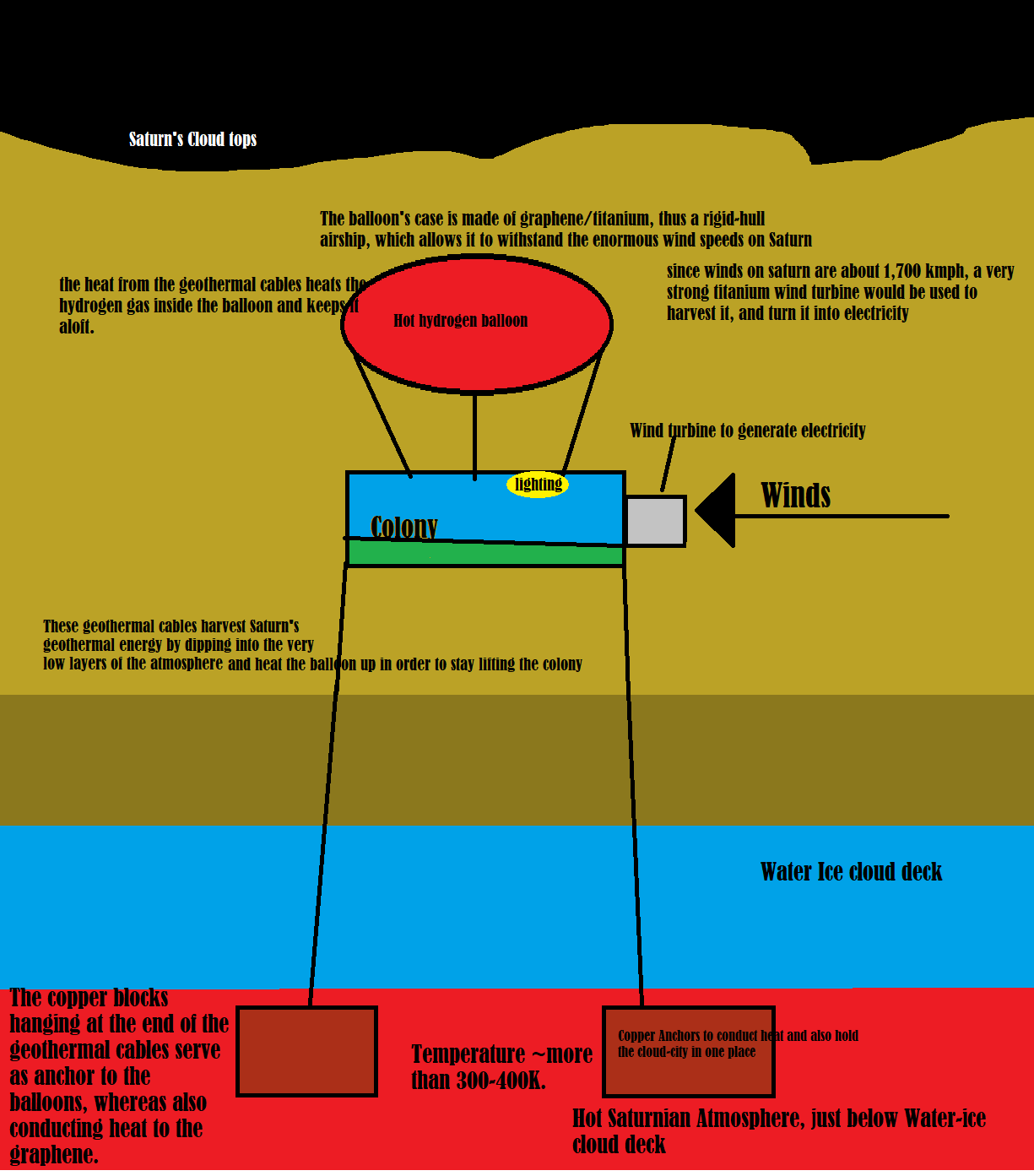 Edit 1: So as to clarify some facts about my cloud city:

There are a few issues with a city based on that design. A floating city will be pushed by the wind until it reaches nearly the same speed as the air around it. This would negate the use of wind turbines, as they would be traveling along with the wind at nearly the same speed. The city would need to be anchored in order to prevent movement, which would be impossible.

The balloon itself does not need to be suspended above the city. Simply encasing an area (similar to a snow globe) with a single atmosphere of pressure (1 bar) would prevent the city from descending beyond a certain depth as the external atmospheric pressure increased. “Water ice clouds begin at a level where the pressure is about 2.5 bar and extend down to 9.5 bar, where temperatures range from 185 to 270 K.” (https://en.wikipedia.org/wiki/Saturn) That temperature ranges from -126 to 26 F so insulation would be needed but water ice could be harvested. There is no need for a hot hydrogen balloon, just a single atmosphere of breathable gases. Depending on the size of your atmosphere, and the weight of the station construction material, you could design it to float at whatever height you desire.

As for energy, Saturn has a hot core, but that core is a heck of a distance from where a city would float. Dangling cables to pull heat up to the city seems silly, and would add tremendous weight to the city, when they could simply pull in hydrogen from the atmosphere and burn that in a generator. There are also trace amounts of fuel grade gases such as propane and methane, which could be captured for energy production. They could always send ships to harvest liquid hydrocarbons from Titan. If your world has discovered fusion power, then you have a nearly unlimited fuel supply floating outside your window. Fusion fixes most problems.

A city floating at a depth where water ice is abundant would potentially face the issue of snow and ice forming on its exterior. Ice would increase the weight of the station, causing it to sink further. There would need to be measures in place to prevent such a build-up. This could be something like a thermal mesh which overlays the surface of the station and keeps the exterior temperature just above freezing. The melted ice could be directed into collection points where it would be pumped into the station or simply be allowed to fall off back into the atmosphere. It could also be something as simple as small robots with RTGs which walk across the surface and melt the ice using their thermal radiation. I am sure you can figure something out.

Edit: The temperature you are trying to capture would range from 80 F (300K) to 260 F (400K). There would be some loss as the heat going up the cable went through the colder regions of atmosphere. The hotter an object, the faster it radiates temperature away. It is unlikely that much heat would be able to reach the station after traveling through the miles of cable suspended in cold air.

As for your weights keeping the station in place, that would not happen unless they were dragging along the surface. Weight does not slow something down, friction does. This is why cars slide on icy roads, a lack of friction. The weight of the car remains the same. But listen, if you want it to work then just say it works. This forum is not designed to figure out new technologies or to brainstorm new ideas, but to answer direct questions. So to answer your question: No, this concept for a hypothetical cloud-city on Saturn would not work in reality… but it can still work for your story. For it to work the way you want, we would need to throw out physics. You can still tell an interesting story even if the world is not based 100% on hard science.

Mostly because they would glow at night. ALso because deep Saturn beasts might sometimes bite one and tow the whole city around, like in Old Man and the Sea except on Saturn.

But @Gilgamesh is right in the comments - the Saturnalians would not perceive the fast wind because they would be moving nearly as fast. Turbines might not generate that much. That is OK. You can use your geothermal cables to generate electricity. People do that on Earth but unfortunately not with cables. Use the cables to heat a working fluid and then have the fluid turn a turbine.

I would like an electrical turbine that both generates electricity and captures heated waste gas for the balloon.

If you really want another system for electricity generation you could have the 1000 pygmy goats take turns on a treadmill. This will generate electricity and help them stay fit.

It is a napkin sketch, so not enough information.

Do you have star-trek level of technology and materials?

Where, in terms of latitude, were you thinking. Near the equator those winds are going at ~1000 miles per hour while comparatively small north-south changes can make that vary substantially. Up around 40 degrees it looks like they are relatively negative, suggesting that there may be quiescent regions that have adjacent less quiescent regions.

Perhaps something that looks like a Phantom-Menace style pod racer, but done with wind turbines? On Saturn they would be extracting energy from the air, and sending it to the colony pod. 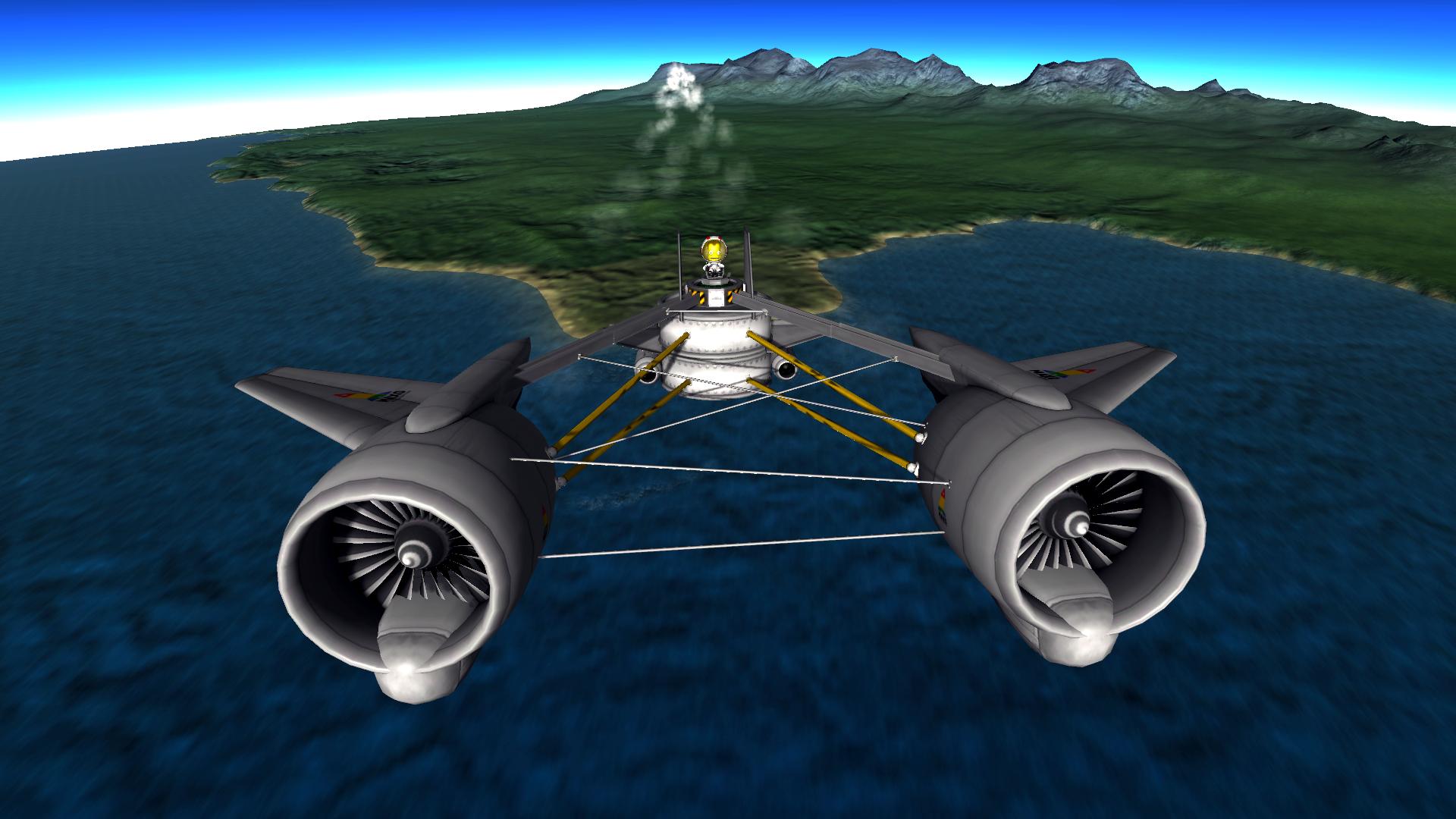 Here is what the ESA says about the atmosphere of Saturn, in terms of its depth: https://www.esa.int/Science_Exploration/Space_Science/Cassini-Huygens/Saturn_s_atmosphere

The ammonia outer layer (ammonia is a great refrigerant aka material for phase-change driven powered heat transfer) is about -250 C, or about 25K, its very very very cold.

Just above the tropopause (130km in) it is about 0C, or merely ice cold. That is a big temperature swing, but it takes about 130km to happen. Near the core it is upwards of 11000C. A decent heat pipe, if it were strong enough, would be a plentiful energy source.