How would a sapient eusocial species avoid inbreeding?

I have a sapient species in my setting called "mole-bears". I based their social system on eusocial species, specifically naked mole-rats.

Mole-bears are on average around 100 pounds and look like six-limbed furless, grey wombats with bioluminiscent markings, they live in underground tunnels and cave systems. Queens are significantly larger, sometimes weighing more than 3 times as much as the non-reproducing workers. Mole-rat colonies range from 100 to 300 individuals.

In a mole-bear colony only the queen and her mates reproduce, the rest are sterile female and non-sterile male workers. When the queen dies, another female will take her place, which could theoretically become any female. After the queen dies the females will fight for the position of queen, and the winner goes through some kind of hormonal change that will allow them to reproduce.

However, since everyone in a colony is related I want to know how they would avoid inbreeding, since genetic diversity is generally important for a species. 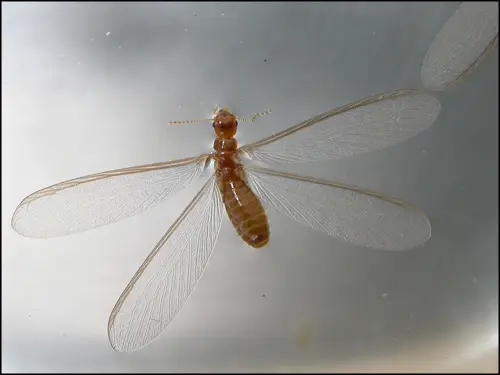 This is a termite. Like your creatures they live underground. But this one has wings. It is not going to live underground right now. Instead it is going to fly away from the nest where it was born and start a new nest.

You can do the same. You have males and nonreproductive females in your nest. If you want to model it on the social insects, some of them have short lived males that fly, and fan out looking for new queens. Then they die. If your story requires male characters they could be juveniles who are expected to leave the nest (e.g. get kicked out) when they growing beards and getting body odor. They wander around looking for a new nest where they are not related to everyone already there and then try to move in. Adult males living in a nest are outsiders who showed up with the right lines and a twinkle in their eye and got invited to stay.

That means one might find male mole bears wandering around on the surface. Some might be hopeless as regards prospects of being invited to live in a nest and instead live in groups of similarly loveless mole bear males. Maybe male only bachelor nests? Or maybe finding a place in groups of other sentient creatures who appreciate what awkward mole bear dudes have to offer.

Considering that the females fight each other for the position of the reproductive queen I'm going to assume they carry this violence through to females of other nests as well, for exclusive access to males if nothing else(resources, territory, pick your poison). Sapience implies some level of politics to be had, so you can imagine where I'm going with this.

One thing leads to another and suddenly the two nests are at war. A skirmish here and there settles some scores and produces male prisoners of war, which are the sole property of the queen whose soldiers won the battle. Said POWs are then used as pleasure slaves/genetic fodder to produce more colony members and introduce new genes into the colony. With a new generation comes new conflicts and the cycle repeats itself.

How intelligent are your mole-bears?

Among primates, either males or females leave their natal band and go join another. Your males could do that. If you want a mechanism, perhaps an adolescent mole-bear starts putting out smells that indicate that he's ready to mate, but which smell repulsive to females that are too closely related. (In fact, in women who are neither pregnant nor on the Pill, men who are different from them smell better to them. I throw in the proviso because pregnant women's taste change, because they are, for safety, avoiding strange things.)

The more intelligent they are, the more this could be used as a mating trait. The male who travels the farthest to get to your hive obviously has the most raw talent. Exchange of males could also be used if they were intelligent enough to have peace treaties.

This doesn't appear to be necessary. Eusocial insects at least generally don't have genetic diversity at a colony level, just at a species level. According to Deborah Gordon, for example, ants in a particular colony are actually more than 50% related to each other (they're closer to 75% related to each other). She actually argues, moreover, that the reproductive unit for ants is the colony as a whole, not the individual. (See her excellent book Ant Encounters for more details).

If anything, this closeness in relation is actually a good thing because individual insects in eusocial colonies often have high mortality rates; for one specific breed of ants, the average lifespan of a forager is two weeks. (For obvious reasons, that particular job is typically performed by the oldest ant). That being said, it's important that individuals be "willing" to "take one for the team", so it's actually good for them to be closely related (because then their genes will be passed on by the colony).

Your Genes Stink
Literally - the drones are literally unable to mate with the new queen as they share many of the same gene combinations and smell awful to each other. They are repelled and immediately seek out a new hive to be part of. The further a drone roams, the more likely they are to find a queen that only smells great.

16
Could fictional species benefit from limited inbreeding?
35
Evolution of species with separate sapient and non-sapient forms?
13
Caste in non-Eusocial animals
14
How would a sapient species descended from felids become herbivorous?
4
Could an Environment Sustain Large Eusocial Animals?
1
How could an eusocial dragon species of elemental castes work?
3
How long would it take for inbreeding issues to arise for a family that practiced inbreeding?
6
What would my phylogenetic tree composed of sixteen Homo species look like?
7
Could a species with human-like intelligence keep a biological caste system?