Viewing the whole timeline from another temporal axis; why can't the first temporal dimension look back and see the future of the time travellers?

A common image in time travel stories is an image of all time, either as a line or a tree form. Take this image from Loki as an example: 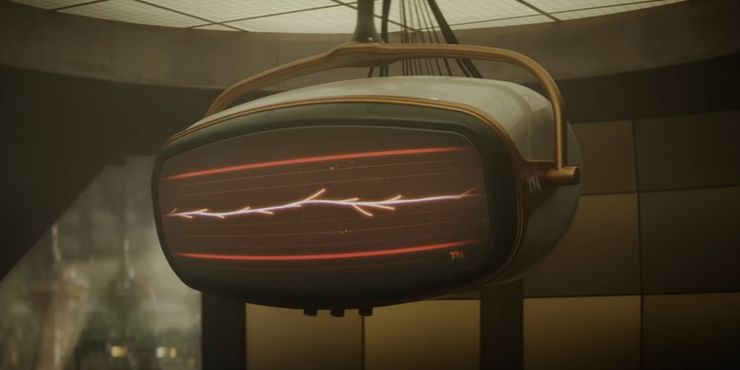 So a time traveller's organisation, like the one for my story, has a way to look at the "normal timeline", the one muggles live in, so that they can insert themselves at any point and make any changes necessary. They know the beginning and the end of the normal timeline and can see it all at once, so it is like they are looking from atop it - like a 3D person looking at 2D Flatlanders. This suggests they are in a different temporal dimension of their own. That is further supported by the fact that there is a timeline that the time travellers experience; events take place in their office which follow each other causally, there's a start of the time travel agency and an end to it. They are just as bound to time as we are, they are just natively on a different temporal dimension and they have the technology to look at the normal timeline as a whole. 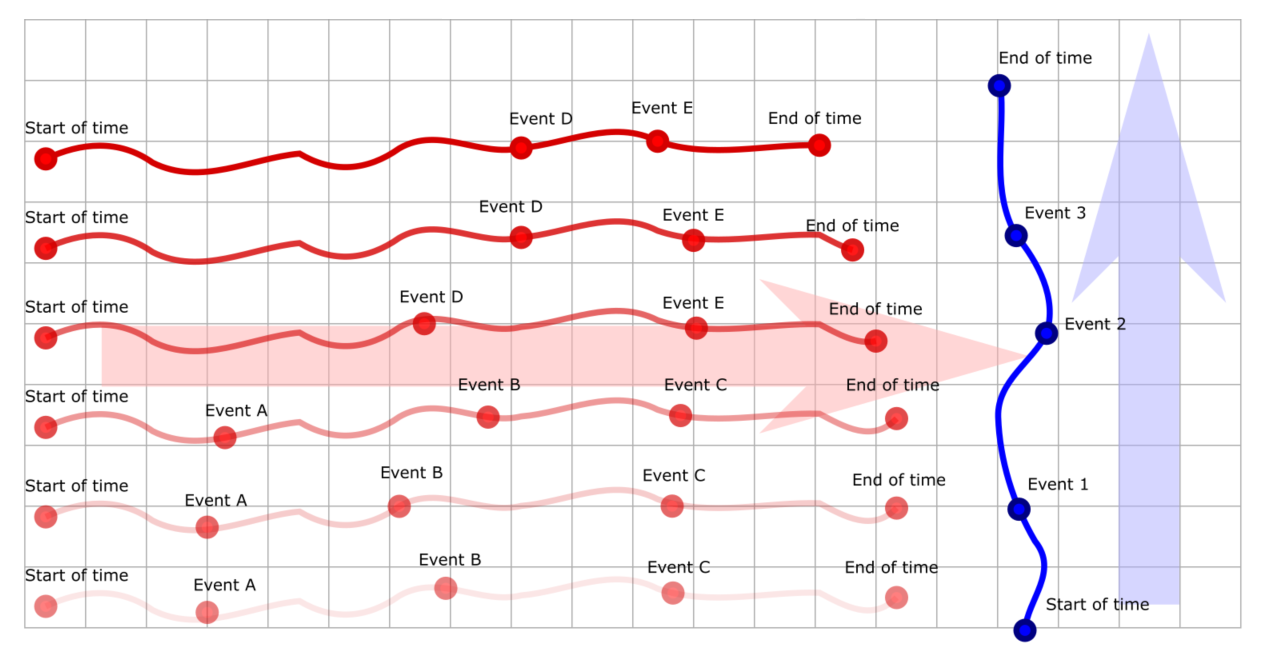 I have provided an illustration of my concept. The red flow of time (temporal dimension) is the "normal" one. On it is a timeline that changes over the course of the second temporal dimension. That means that at any given "moment", the red timeline starts at the start, ends at the end, and every event within it is causally related - or is it? I'll get back to that; but understand that it can't loop or branch, it's always a line. This timeline does constantly change as the blue time progresses; events move or change, the end may be expedited or delayed.

The blue time is the time of the time travellers. They exist natively to the blue timeline; they can see the red timeline from start to finish as it exists at that moment, and they of course keep records of what it used to look like. They can use that to make interventions, change events as they see fit, and add non-casuality to the red timeline. But the blue is causal; event 1 is followed by 2 and 3.

The blue time "interferes" with the red time passively, we call it quantum randomness. For every instance of a red timeline, the quantum dice were rolled in a specific way and that normally determined the order of events. When a time traveller visits the red timeline, they are manipulating quantum tunneling to materialise themselves at a place and time, seemingly out of thin air. Conservation of energy is still maintained in the red timeline however; they need to ensure those particles that form their body disappear somewhere else in the universe, or at least equivalent mass-energy.

This idea really scratched an itch I have for stories featuring multiple dimensions, but it brought one issue to light. Can't the time travellers take their timeline-viewing machine, go into the normal timeline, turn the machine on and view their own temporal dimension from start to finish? Wouldn't they be able to see their own lives and deaths and actions? That would make plot involving the time travellers impossible and meaningless.

One can come up with mundane reasons why the timeline-viewing-tech may not be physically transportable to the Muggle Earth, but those feel like cop-outs. How can I make the impossibility of seeing the blue flow of time from start to finish an inherent property of the system, rather than something arbitrary like tech restrictions?

Let's take the flatland example even further lets say the flatlanders live on the surface of a table. Each timeline has a different table. On the underside of the roof is an extra flatland. Your time extra dimension.

Using the technology they can activate a camera in the ceiling, allowing them to see each of the tables. So far it is identical to the story.

Now what happens if the time travelers go from the ceiling to one of the tables and activate their device? The device shows just the tables. This is because the machine they take with them is just a display device. The technology picks up the cameras, allowing them to see through it. As the cameras are fixed to the ceiling the perspective never changes. As flatlanders they cannot interact with the cameras to change the perspective. They can never see the ceiling.

The technology only allows viewing from a forced perspective. The time travellers have managed to do things into higher dimensions, but are unable or not skillful/knowledgeable enough to change the perspective.

Can't the time travellers take their timeline-viewing machine, go into the normal timeline, turn the machine on and view their own temporal dimension from start to finish?

No, because their timeline takes place in the extra-temporal dimension that time-travelers use, meaning that it's not like a 3D looking onto a 2D flatland, its a 3D looking onto a 3D. In order to see a time traveler's timeline, you need the equivalent of a 4D view.

Can't the time travellers take their timeline-viewing machine, go into the normal timeline, turn the machine on and view their own temporal dimension from start to finish?

This question has a lot of assumptions baked into it that an engineer would laugh at.

Of course, we know that it has to do with signal strength, energy requirements, and inconvenient properties of EM radiation, Earth's atmosphere and curvature: your car doesn't have a giant powerplant, an enormous antenna, or an array of repeating towers spread across the land. (Also, the typical car radio does not have a microphone.) My hypothetical questioner asks a question that is absurd because their understanding of how radios work is extremely superficial.

This is the same kind of mistake being made by a person who thinks that the timeline viewer can simply be relocated and pointed at a different timeline, as though that timeline were simply a different physical place and the viewer were a pair of binoculars. That is not what timelines are, and the question grossly misconceives what is involved in "observing" a perpendicular timeline.

First: information about perpendicular timelines is carried to the viewer via some kind of physical process. Maybe it receives waves/particles, or maybe it measures the motion of such things. There is no guarantee that this physical medium can carry information in the other direction. So, if you want it to be impossible in your story, then that's a real limitation.

Second: it assumes that the machine's observations depend upon its location and orientation, like a telescope. That does not have to be the case. Telescopes and binoculars capture and focus light, light which is already traveling in both directions between the observer and the observed, and so you can observe Hill 1 from Hill 2 by moving the telescope to Hill 2 and looking backward at Hill 1. But it's up to you to decide whether this mechanism works that way. Perhaps the physical medium is polarized, like light, and so a device like this can only see horizontal timelines no matter where or when it is located, rendering vertical timelines completely invisible to it. Or maybe they work like cygnet detectors, which are not "pointed" in any direction: one is built underground, where it waits to get hit by a cygnet coming from any direction at all.

For a start, you need to flesh out the fictional science of how timeline observation works. A straightforward approach might look like this:

You only have to take this as far as you need in order to justify the limitation you're looking for. But, honestly, I think you don't even need to work out these details: the fact is that it's very common for laypeople to have absurdly oversimplified ideas about how complex technical or scientific things work, and so they end up with absurd notions when they try to extrapolate from that flawed foundation. You can do the same without having to handwave anything. And I really doubt that any audience will be interested in the gory details of a fictional new branch of physics.

Just say that the device can't work like that. Or say that they haven't yet figured out how to use it to observe their own vertical timeline -- which is probably how they would describe the situation, even if it were actually impossible, until they have conclusively proved that it can't be done.

Instead of having your travelers fully travel to a new universe and interact with it, they could “partially” travel to that universe. They are still tied to their native blue universe but able to interact with the new universe due to a field/device/technology which partially moves their bodies into the red universe. When that field is turned off, they revert back to their native universe. It becomes more like they are projecting a solid holographic body into the red universe, which can be affected by, and effect, that universe. This also avoids the issue of adding or subtracting matter between universes.

The reason why they cannot turn their timeline viewing machine on and look backwards into their own universe is because their machine is still technically in the blue universe. The thing preventing them from constructing a machine using matter from the red universe could be the lack of an element which is naturally occurring in the blue universe, but which never formed in the red universe due to slightly different laws of physics. Without the “temporium” element, there is no way to create a timeline-viewing machine and look outward from the red universes.

This slight difference in the laws of each type of universe could be what prevents them from fully transitioning between universes. Matter from one universe cannot exist in the other, as the laws of physics do not allow for it, thus the need for the “holographic” bodies. This would also prevent technology and biology from contaminating other universes. Alien microbes cannot fall off a time traveler and infect the locals since they are not actually there to begin with. A pickpocket which steals a traveler’s advanced tech smart phone would see that device disappear once the traveler left the red universe. Kind of a built in safety measure.

Not the answer you're looking for? Browse other questions tagged time-travel spacetime-dimensions .

10
Multidimensional Time-Lines
3
What would be the "scientific" explanation for having memories from a parallel universe?
12
What goes in, must come out - limitations of temporal displacement
9
How can a species of natural time-travelers have a meaningful society?
7
Aliens in a 4D universe try to explore our 3D spacetime fabric: How can they do it?
10
Is three-dimensional time consistent and paradox-free for time/dimension travelers?
2
How could 4th Dimensional "pockets" of space form in a 3D world, and how would 3D objects entering and exiting this space appear to observers?
3
Is this time travel scheme internally consistent?