How does the pending climate catastrophe play out with a sudden population reduction? [closed]

Ask Question
Asked 14 days ago
Modified 14 days ago
Viewed 101 times
0
$\begingroup$
Closed. This question is off-topic. It is not currently accepting answers.

In the real world, we are facing a dire situation with global warming becoming worse by the year and nothing being done about it. The projected models predict several degrees Celsius warming by mid-century and in a few hundred years, when the ice caps have completely melted, sea levels will have risen anywhere from dozens to a few hundred feet higher than present.

All of these standard-model projections assume continuing trends in population growth and fossil fuel consumption, with up to 15 billion people on the planet in several more decades pumping ever more CO2 into our increasingly warmer environment.

How do these projections play out if there were to be a sudden, significant population drop? The method does not matter, but assume that it does not cause civilization itself to collapse immediately from the sudden population shock. I’d like to know projections for a 50% reduction, 75%, and 90%.

A slowing down of human activities seems to have positive effects on the environment, as it has become visible during the beginning of the COVID-19 pandemics, when many places under a much lower anthropic pressure has turned quickly to a somewhat more "clean" state: just to name a few examples, the lagoon in Venezia had turned clear without the continuous boat traffic and even dolphins and octopuses have been seen roaming its waters, while deer, foxes, boars have been seen in places where they usually would not venture.

However, answering to your question is a different ball game.

First of all, reducing the population by that much will hardly not lead to a collapse of the civilization, and even making the strong assumption that it doesn't, it's very likely that it will result in an increase of pollution: if you don't have people, you need more machines to do their jobs, producing more pollutants both during their operation and during their manufacturing. And in the rush to cover the gap, not polluting will be the least of the concerns.

But don't forget that certain jobs are not yet replaceable by machines.

Civilization collapses if 50% of people die; unless perhaps if you selectively make those the youngest and oldest of society, the children and elderly that do not work.

But even then we have only delayed the problem, we have no young to fill the worker pipeline, as the workers age and die or retire, so civilization collapses anyway. Back to a state of low production.

But, presumably, after the wars and revolutions, that will sort itself out again. Humans can, if they want, reproduce exponentially, in early America six and eight kids for one breeding couple was not unusual at all. So in a single generation, two adults replace themselves with six adults, 3x as many.

So of course a 50% or even 75% reduction in population, although socially, politically, economically and likely technologically catastrophic, could be back up to 9 billion in a few generations (allowing for much greater childhood and elderly mortality), say 50 years or so.

Since the short-term carbon cycle is roughly the same length, 50 to 100 years, if the survivors did not change their ways in producing energy, we'd only see a 50-100 year delay in the climate change catastrophe: It would just come back; because a century is not enough time to pay down the carbon "debt" we have accumulated.

And face it, they probably would not change their ways. In the collapse of civilization, you burn wood, coal, oil, trash, whatever to generate energy and survive.

And people that rely on the current infrastructure, products, medicines, medical care, law enforcement, delivery services and so on will be dying by the hundreds. Businesses and governments do not scale to half or a quarter their size and just keep operating. The bigger they are, the less they can scale down and still survive. Big companies are intricate machines made of people, you cannot just arbitrarily remove half of the parts and expect it to continue functioning as it was. (If that were possible, the Big company would fire half their people and pocket the profits; right?) Nor can you remove half their customers, and thus half their revenue, and expect them to just chug along. They have fixed costs, mortgages and loans and property taxes, and very few companies have profit margins of over 50%.

All the big companies and manufacturers and food producers and transportation businesses fail. Completely dysfunctional because of their lost critical workers and broke for lack of sales. Practically overnight.

Government and law enforcement and police forces hit the same wall, dysfunctional for lost critical workers and no revenue to pay the rest.

Anybody that relied on products (like medicine, insulin, pills) or services to stay alive is suddenly out of luck. People will form tribes with their remaining neighbors, family, and friends, to protect themselves and find a way to survive.

All of this gets worse if we lose more than 50%. In the Black Plague, at least, most people were much more self-sufficient than we are now, on isolated farms, or even hunter-gatherers, where scaling down is not as devastating. Fewer workers mean less crops but less mouths to feed. There was far less of an infrastructure that civilization relied upon; no power grids or highway systems, electricity or engines or machinery that life depended upon. No factories we bet our lives on. Very lax law enforcement. Primitive medicine, at best.

And that is where the survivors are headed, a setback to our pre-industrial middle ages, with a corresponding population.

But the knowledge of how to industrialize would still exist amongst the survivors. You'd still have engineers and professors. So the rebuild would start, and likely be complete within a century, without having paid much of our carbon debt, so climate change would be recharged and pick up again.

Let's have some politically-incorrect fun with your question

I've been hearing the very claims you're talking about — with the very same consequences ("irreparable damage in 5 years!") — since the 1970s. Nobody takes into account that the world is really, really, really good at healing itself. This isn't to say that we can't eventually beat the planet into catastrophic submission. Nor is it to say that we shouldn't take immediate action to be better stewards of our home planet. I'm just pointing out that Earth isn't quite as fragile as everyone thinks.

Which is important because it has a direct bearing on your question. Let's assume all the dire predictions are correct this time. What would happen if we snap Thanos' finger and 50% of the population vanishes in a moment?

Well... ignoring the fact that @user535733 is correct, which 50% matters a lot... And ignoring the fact that you'd probably lose another 50% or more due to all kinds of problems arising from people not being around to do their jobs (a condition that I think is a lot bigger issue than global warming)... what would actually happen is...

Let's use the following graph: 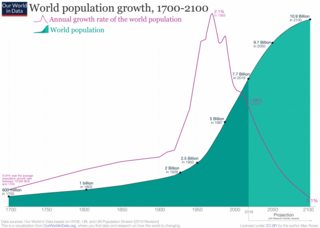 So in 2100 the population is about 10.9 billion and 50% of that is 5.45 billion which we crossed somewhere around 2005 — and that was full-on during the time of dire predictions. But, from a more practical perspective...

Ideally it buys you less than 95 years.

Because all those panicked people are probably gonna start breeding like rabbits. But let's ignore that. It takes time for the Earth to relax from the pressure we're putting on it. How much time it takes to relax depends on how much damage your future society caused. So I'm thinking it buys you 50 years or so. In other words, you'll see a benefit for 50 years, and then you're back to 2100 levels.

Yeah, but you said "basically nothing."

Yup, that's because there's more at play than just the pollution caused by humans. Unless you intend to destroy 50% of the food animals, they'll keep contributing at 2100 levels. Equipment like factories and mining facilities depending at all on automation will continue plugging along until they collapse, probably catastrophically, causing more pollution than if they had been crewed. All that equipment left behind and not being taken to the dump or recycling is now degrading uncontrollably into the Earth. A reasonable argument could be made that Thanos actually made the problem worse by whacking 50% of the population. Thus... nothing will really change.

If there were a 75% reduction and this reduction would be distributed in a regular manner all over the world there would be a temporary improvement for the environment because many human activities would stall while people try to avoid contact. But then people will think that life must go on and pushed by the need for food they will take a fatalist approach. Probably less than ten years from the collapse things will start moving again. Trouble is that the infrastructure to extract fossil fuel is delicate and will lack maintenance, without energy all the other activity will slow down, but also technological progress will slow down, first people need to fill their bellies they can think about the rest. So there will be a period during which the environment will be able to take a breath, but with the population growing again and progress lagging eventually humanity might find themselves back at square one. How long would be this break for the environment? Maybe 2 or 3 generations, let's say 75 years, in geological time it would be almost nothing. Little rest for nature.

If there were a 90% reduction rather than a society collapse there would be a collapse of the central authority and current powers. The population would fragment in small communities and a lot of technological knowledge would be lost. It will be like the middle ages after the fall of the Roman Empire. Population in the Italian peninsula fell to a little bit more than 5 million people back then which is comparable to the current population collapsing by 90% (But part of the population was quickly recovered by bringing in barbarian settlers). Since knowledge is way more advanced compared to the science and technology of the Roman age the recovery would be faster, but still a matter of centuries. What would happen after the recovery? I don't know because fossil fuels will probably be exhausted by then, so there would be no warming by fossil fuels, but other damages like cutting down forests would go on. Therefore I could not rule out that in a couple of centuries humanity would be back to square one.

Not the answer you're looking for? Browse other questions tagged science-based climate-change .

4
What is a realistic plague that could have wiped out the population of an island?
4
How would the Great Atmospheric Catastrophe come about?
3
How long does it take for a prominent trait to evolve out of a population?
21
How big would a satellite need to be to block out the sun?
4
Worldbuilding & Climate: How does the sun affect a simple sphere with atmosphere?
5
If the Earth is completely covered by mirrors, how quickly does it freeze?
3
How Quickly Would the Pioneers of this Seeded Jurassic World Alter the Climate?