I'm designing a world orbiting a red dwarf. Now, I want the life on my planet to have a rich variety of color just like life on earth does. The problem is that I don't know if that's feasible. From what I understand, on Earth the Sun's light shines mostly in the visible spectrum so life on Earth has adapted to see in it and organisms make use of their colors for various purposes like camouflage, warning or sexual attraction. In the case of red dwarfs, I've learned that they mostly shine in the infrared spectrum. So does that mean that life on my planet would only see in the infrared spectrum or could they see in the visible light as well. If they only saw things in the infrared does that mean that they wouldn't need to display any of the colors we see? If that's the case, how can I avoid that?

Edit: I should clarify that when I say I want there to be a variety in color I mean that from a human's point of view. Why would creatures on such a planet evolve to display various colors in our field of vision when they themselves can't see on the visible light spectrum (I am only assuming that they can only see on the infrared because that's the dominant light emitted from red dwarfs. If it's possible to see in both fields of vision please correct me)

Contrary to popular belief, a red dwarf isn't actually red -- except by comparison with larger, hotter-burning stars, of course.

The surface temperature of a red dwarf I've looked into for story purposes, Gliese 581, is very comparable to that of the tungsten filament in an old fashioned incandescent light bulb (not a halogen photoflood, mind you, just the kind of bulb you might still have in a closet where you almost never turn on the light so the bulb has lasted twenty years, or in an oven). To the eye, without other reference, it would look white or barely off white. If you had a genuinely white light to compare, it would look yellow-orange (like an old bulb alongside a modern "cool white" LED).

Human and generally earthly color vision would perform much as it does on Earth, with the exception that items colored deep blue or violet would look darker than under white light, and creatures (like bees, as mentioned in another answer) that depend on UV might not see as well (though I understand honeybees see visible light much as we do, they can just see UV too).

I suspect that color vision would be less useful on such a world, and you'd end up with things that mostly saw intensity, eg. "grayscale".

Here's the more-or-less the same graph as I showed you before (because I'm pleased with how it came out, even if the visible-spectrum bar still isn't quite right): 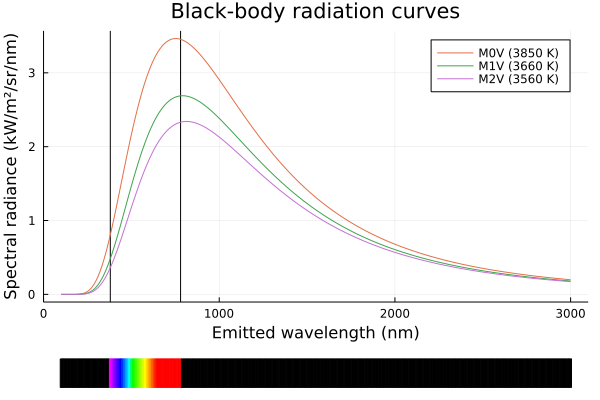 Most of the light provided by the star falls into the near-IR band. I've already suggested in your previous questions that vegetation is likely to be strongly absorbing of red light, and might well be strongly absorbing of shorter wavelength light too and so would have an overall green-ish or black-ish color. Under the strong red light, any green or blue coloration would be quite dark anyway, and might end up looking brown or black to our eyes anyway.

48% of the light of an M0V star is in the 1000nm to 3000nm near-IR band (rising slightly to 51% and 52% of M1V and M2V stars, respectively). Thing is though, seeing in the near-IR band is technically quite difficult, because thermal noise issues cause your photopigments to be triggered by things other than the photons you care about. This is the effect that leads to grainyness in photographs taken in low light conditions, and for eyeballs and their analogs you end up with low-resolution fuzz instead of nice sharp images. There's a bit more information in this article: Why animals don't have infrared vision. There's some room to handwave in near-IR pigments that aren't quite as badly affected by thermal noise, but ultimately physics and biology are not your friends here.

I posit that things that can see on your world won't bother with color vision, because there's too little light in the first place and it is too difficult to detect. Brightness and contrast will be much more relevant.

So with that in mind, it might not matter very much precisely what sort of colors the wildlife have... they may well have textures... stripes and spots and so on, the same sort of range of patterns that terrestrial life has, but you might find that they might have one pigment which might be boring brown (like melanin) or maybe something more interesting. They are at least unlikely to be albino-pale, or entirely blind.

(polarized light may also be of interest, as it is with many sea-dwelling animals, but I know little about the use of that sort of vision so I won't make any guesses just now and it probably won't have much of an affect on coloration anyway)

10
Can we identify distinct "colors" beyond visible light?
4
Purple plants on a planet orbiting a green star?
10
Anatomically Correct Color-Adjustable Eye
4
Would living on around Alpha Centauri change how our eyes see color?
11
What would a Rainbow look like on an earth-like Planet orbiting a Red Sun?
17
What would be the appearance and color of a deep, pure and vast liquid CO₂ ocean as viewed from space (ignoring the atmosphere's influence)?
1
Would a carnivore that can only see in infrared be an effective predator?