What would realistically happen after a gravity magic spell is cast?

I have read dozens of books where gravity magic is a thing. It ocurred to me, while reading one of these stories, that every version of a gravity magic spell that I have heard of, is missing something, namely they dont consider the effect of the spell on fluids in the environment like air or water.

A typical example would be a spell where the caster creates a invisible plane where the acceleration due to gravity is a constant with its vector perpendicular and pointing towards the plane. This is demonstrated in the stories when the spell is cast on the ground, crushing an opponent, or horizontally throwing an opponent, etc.

Realistically though, if a gravity spell was cast on the ground, the column of air over the gravitational plane would also be affected.

My initial thoughts are the air column would fall and compress, which would cause the air to heat dramatically, then a vacuum would form where the air was leaving creating extremely high winds which would could eventually form a fire tornado. Where would it end though? Could it cause a fire hurricane? Would it get hot enough to vaporize rock and bore a tunnel to the Earth's core?

So my question is, what effect would a gravity spell have if its plane of attraction was a 20' diameter circle placed on the ground that increased gravity in a vertical column by 1g and it could last 1min, 10min, or an hour before expiring?

I think you are overthinking the effects - besides the total collapse of reality as the laws of physics are broken.

With an increased gravity force pulling down, you would simply achieve a downdraft. gasses in the column would be effectively heavier than the gasses around it, and they would sink. Of course, the gravity isn't affecting the pressure, so the gasses would tend to rapidly compress out of the column as the air moves down. The gasses throughout the column would pull fairly gently on the air around to fill the space as the gasses sucked in and then were blown out due to pressure.

There would be almost nothing happening to the ground, except the effects of wind and turbulence. Any heat generated by friction would rapidly diffuse. Many surfaces on the Earth (like where a truck parks) experience temporary increases in weight, so ground deformation would me slight at best.

It's a lot more fun if the column is the other way, but still not Earth-shaking.

You would have a dirty column of air shooting upwards quite a bit like a tornado. air would be both sucked in (especially at the bottom) and blow outwards to adjust the pressure of the air in the column with the air surrounding it. At the top, near space, the pressure differences of the lower and upper columns would cause very little loss to space as the gravity tried to accelerate gasses towards space, and the denser gasses from below diffused outwards to adjust pressure. It would likely start to rotate from the Coriolis effect, and might even visually be indistinguishable from a very out-of-place tornado. Friction would generate some heat, but not enough to make a huge difference given the level of air mixing that would likely be going on up and down the column. 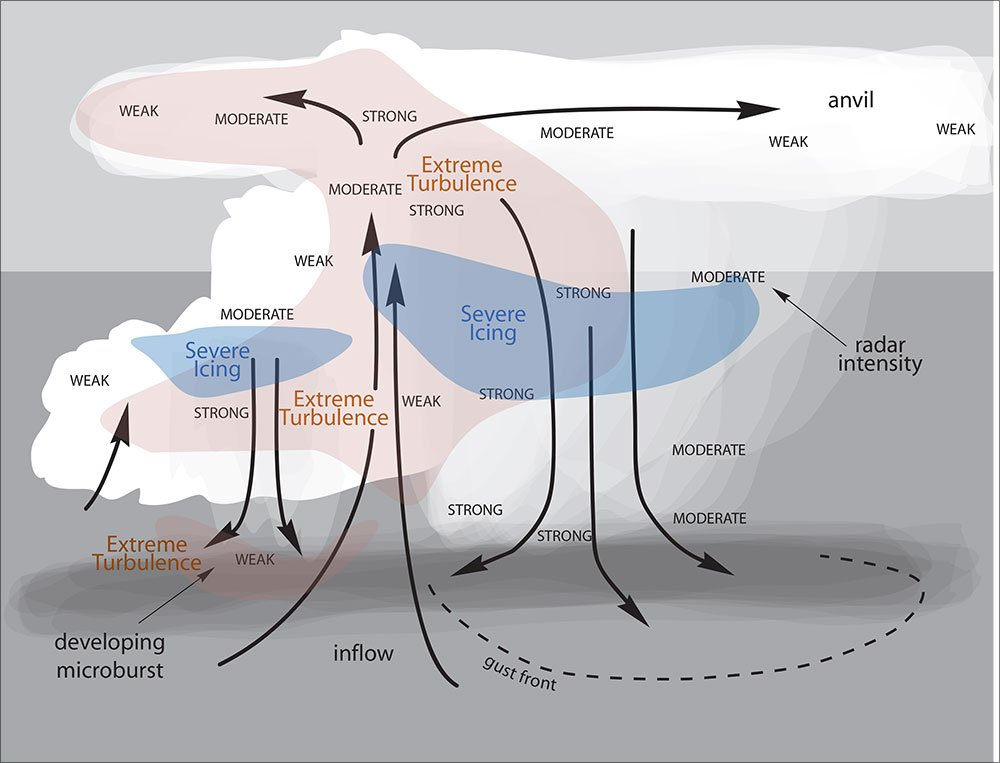 An exotic location for your column (like a lake or river of lava) might have some specialized effects, but I'll assume a more standard soil covering rock (eventually). The ground and loose soil would rocket upwards and scatter in all directions as the violently mixing air blew it out of the gravity column. but consider areas where there are tunnels and overhangs of dirt and stone. the cohesion of the matter is high enough that a fair amount of it would stay put despite the change in gravity.

We don't really know, because gravity is not a force.

Since it is tagged science based and physics - I will attempt to answer as close as possible to our current understanding of Gravity in physics terms.

Gravity is not a force. It is the bending of spacetime towards regions of higher mass. What does this mean? It means that all objects that have trajectories 'at rest' (ie. with no other forces acting on them) move initially linearly through spacetime coordinates. They then 'appear' to bend in space and time only as spacetime itself is bent to a region with higher mass and energy.

One way to look at it is our Moon is actually travelling in a straight line because Gravity is not a Force - it is actually resting. What is happening is the Moon's trajectory 'appears' to bend around the Earth because Earth is within a region of higher mass, and thus has a bent spacetime around it such that the Moon's straight line is a now a circle (ie. an orbit).

No force is acting on the Moon. No energy is being applied to it. The Earth is not 'pulling it'. The Moon is at rest and does not experience acceleration. Only if we apply rockets (ie. a force) to the Moon will it experience force.

This means that on Earth, we feel heavy when we sit on a chair not because a force is pushing us down, but because the chair is instead pushing us up. The Earth and chair actually consists of atoms, each repelling each other. It is actually the electromagnetic repelling force that is causing us to 'feel' gravity, which is actually a push upwards from our chair.

So your magic of 'plane of attraction', 'gravitational force to an area', makes no sense as there is no 'attraction', there is no force due to gravity. All objects in the universe are at rest. The only forces experienced by objects are electromagnetic ones (or Strong & Weak nuclear forces too which for brevity we shall ignore).

So I propose to accomplish your spell, you are in fact halving the power of the electromagnetic force in that region instead. This would reduce the repelling effect of all electrons within that region, and cause each objects trajectory to be less influenced by that force, and thus revert more to its original 'at rest' trajectory which would likely be towards the Earth, as this is a region of higher mass.

Of course, this would also cause havoc with electrons and photons, and likely have profound effects in all areas of physics, not just newtonian but also including implications for particle physics interactions, nuclear physics and chemistry. To answer your question, I imagine that although objects would 'appear' to accelerate towards your magic 'plane', at the very least electrons would be less bound by their nuclei and objects affected by your field become odd indeed, being perhaps ejected. Although their trajectory would be more towards the 'ground', for 1 hour all objects may also 'explode' (although I am just guessing there - I would imagine a shower of free electrons, light and energy).

Not the answer you're looking for? Browse other questions tagged science-based magic physics gravity .

6
What would be a mechanism to explain tech failure as a result of new magic in the world?
0
How would you explain magic with eclectic connections between effects, colors and inter-magic interactions?
76
How to prevent tiny mistake in 'programmable language' magic spell causing horrible disasters?
41
What kind of spells would magicians cast in combat if the fuel to magic is very expensive
18
How to realistically implement magic-users in medieval warfare?
23
Gravity magic - How does it work?
9
Vertical cyclones in a rotating space habitat
15
Why casting grand spell usually accompanied with tapping the ground with quarterstaff?