How large would a chunk of ice have to be to do lasting harm if it were 'thrown' at Earth?

I'm working on a story involving life on Europa being upturned dramatically by contact from a probe sent from Earth. I know the chances of life, let alone intelligent life, are pretty slim on Europa, but I'm ignoring that for the sake of the story. The driving force of the story is that a probe that's come from Earth crashes/malfunctions after melting through the ice.The probe sinks to the bottom of a trench and sets off some sort of ecological disaster/collapse, that then has cascading effects on the civilizations living there. In retaliation, a fairly advanced society that has adapted to living in the ice (most of society is less advanced and lives on the sea floor), makes plans to retaliate against the Earth by breaking off a chunk of the crust and hurling it at Earth.

How big of a piece of ice would be needed to cause considerable damage to Earth? I'm thinking even if it burns up entirely on impact, if it adds enough water to our atmosphere it could really do some damage, but I'm not really sure what sort of size would make sense? I'm thinking it would need to be as little as possible while still big enough to ensure it does real harm to Earth. It would probably not be going very fast since they don't have engines attached or anything like that, and are purely working with controlling water pressure to push it the way they want (my idea is that they are basically creating their own plumes as initial propulsion out of orbit, and then just riding that momentum or possibly sling-shotting around other celestial bodies to compensate). I'm also just going to assume they have the capacity to calculate the trajectory correctly. So they are reasonably sure it will hit Earth.

I don't know much about physics, so I'm not sure how much Jupiter's gravity would have an impact, or whether they would be able to use that somehow to slingshot it around at their target and maybe increase it's speed that way, or if it would most likely just never be able to break free of Jupiter's orbit at all without a more powerful propulsion.

Thank you for your help! 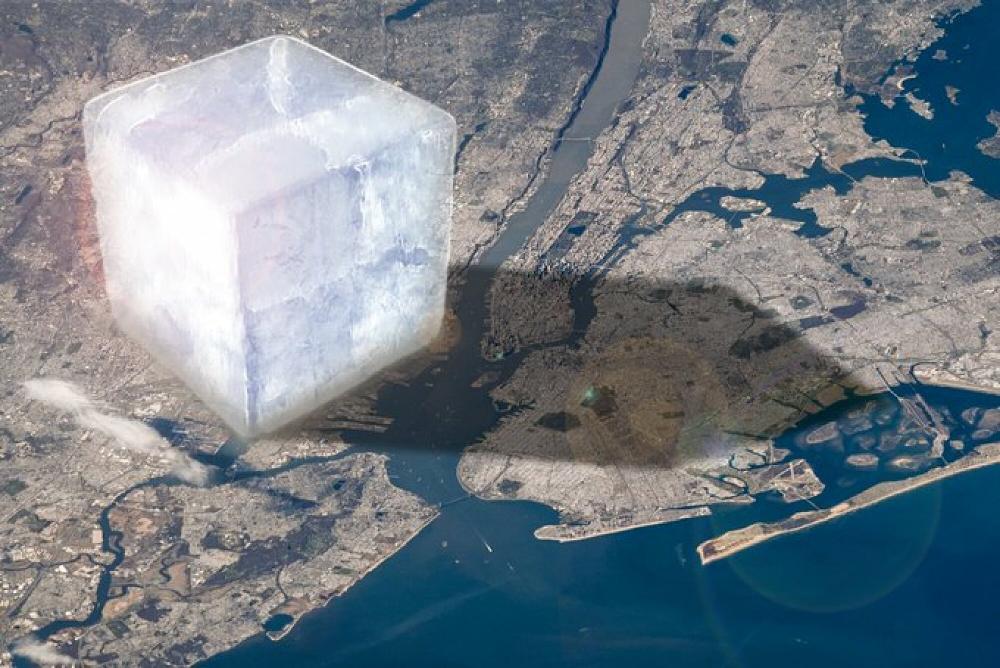 From Wikipedia, the asteroid that killed the dinosaurs is estimated at 10-15 km in diameter and hit the Earth at about 20km/s.

The mass and speed together give the amount of energy that was suddenly absorbed into the Atmosphere. Exactly what the projectile was made of does not matter.

D'Monlord says 20km/s is about the same escape velocity you need to escape from Jupiter's gravity well and the projectile will, regardless of what happens in between, hit Earth at least 11km/s. So let's split the difference and say it hits Earth at 20km/s.

Asteroids can be up to 5 times denser than ice. That means an ice asteroid of the same mass has $\sqrt[3]5 \simeq 1.71$ times the diameter.

Ice cube with 73 km side would not melt in the atmosphere. Atmosphere is thin, at this speed and right angle it would penetrate the atmosphere in seconds and hit Earth harder than what killed the dinosaurs. Kinetic energy of this magnitude doesn't just dissipate in atmosphere.

But most of this energy has to be first supplied to this chunk of ice by Europeans. And if they can do that launching ice cube looks like a bad idea. Accelerating giant piece of ice to escape velocity using water is terribly difficult. It melts and breaks. I can't think of any plausible way of achieving it.

I would consider something else. E.g. Europeans are not carbon based but extremely proficient in building nano-machines. So they make a machine capable to replicate itself using any protein and send about a cup of it to Earth.

Not the answer you're looking for? Browse other questions tagged science-based science-fiction orbital-mechanics astronomy ice .

14
How close must a supernova be to severely harm the Earth?
9
If Earth Were Forged by Fire and Ice
16
How would a microscopic organism create kilometre long fibre optic cables from ice
6
How much damage could a complete loss of technology cause?
4
Space elevator off Europa without running into a nearby moon?
13
Where do hydrothermal vents form inside icy ocean worlds?
13
What would the sky look like if there were 100 Sun-sized stars exactly half a light year away from Earth?
20
What's a reasonable environmental disaster that could be caused by a probe from Earth entering Europa's ocean?
3
Could a large chunk of Europa's ice crust be 'thrown' at Earth?