Channels of fluid heat interchange in the endless underground dimension

Note: I'm asking a science-based question yet I'm doing a lot of handwaving for certain counter-scientific aspects of the world. Please don't be snappy and remark that I should just handwave this problem as well; the reason I'm not addressing every impossibility at once is that I want to keep the scope of the question reasonably narrow.

There's a dimension that's filled with dirt. Consider an environment like Earth's crust and extend that endlessly in every direction. Don't worry about how it came to be, or why it doesn't collapse into a black hole.

This place is rife with gas-filled caves and tunnels where exotic plants and animals live. Gravity exists, but not in a consistent direction: certain pockets of earth are hyper-dense and you are drawn to them. They are filled with heavy, radioactive elements, which slowly decay and radiate heat. Don't worry about why those pockets haven't all coagulated into one massive area yet.

Besides dense pockets there's also light pockets, their inverse. These are more esotheric and I haven't fully decided on their composition yet. What we do know if that they have effectively negative gravity (which may be just by virtue of being extremely low density; being in their vicinity, there's less mass in their direction so you're drawn by the rest of the mass in the opposite direction) and that they are an effective heat sink. Don't worry about how that heat sink works; assume for now that their ambient temperature is constant and that they dispose of heat at the same rate the radioactive dense parts create heat; keeping the total heat energy in the system stable.

Now there's a biochemical cycle that supports all life in this dimension, and it depends on the circulation between dense pockets and light pockets. There's a dynamic system of "veins" between light and dense pockets, which circulates and spreads the essential elements around.

That circulation is driven by temperature differential. A cool substance descends to the dense pockets, and heats up as it is compressed. At some point it is hot enough for its own density to decrease, and it "bubbles" up back towards the nearest light pocket, like a lava lamp. On the way back to the light part it disgorges its heat to the surrounding earth, including the cave system, until the cycle begins anew. This temperature differential is what the life cycle depends on.

I wonder if this, the temperature interchange between light and dense pockets through veins filled with a flowing medium, can work on a geological timescale (millions of years). I think it depends very much on the medium. Air circulates and compresses well, but if it flows through a tunnel it very easily disposes of its heat to the neighboring earth and doesn't travel very far. I'm looking for a circulation distance of at least kilometers; preferably hundreds of kilometers. Maybe a denser gas would work, or a liquid?

Any substance is allowed as long as it is chemically stable for millions of years; and it isn't something as artificial as nanobots that can do whatever the plot says. The theme I am going for is an extremely exotic yet "natural" environment. A bizarro dimension where instead of empty space we have dirt, yet it still somehow works and supports life.

Heatpipes are used to transfer heat from one area to another and are very common in computers and other compact electronic equipment. They are a sealed tube that is partially filled with a fluid. When one end is heated, the fluid inside vaporizes and travels to the cooler end, where it condenses. Capillary action or gravity returns the liquid to the hot end, and the cycle repeats. The amount of heat that is able to be transferred through a heat pipe can be staggering. The working fluid is typically water because it is cheap and non-toxic, but other possibilities include ammonia or methanol, depending on the temperature used. Other than the motion of the working fluid, there are no moving parts.

Generally, heatpipes are a few inches to a few feet, but a special type of heatpipe called a thermosiphon that uses gravity instead of capillary action can be "virtually unlimited" in length according to this manufacturer. Depending on the composition of your tubes and their orientation, long distance heat transfer networks aren't a huge stretch of the imagination. Possibly some sort of cilia or peristaltic motion to help the fluid around bends or where gravity isn't strong enough.

What you have my friend is an abstracted version of the geothermal Earth. There is a hot dense pocket (the core) on the inside; a light cold pocket (the surface) on the outside; and a fluid in the middle. The fluid circulates and transfers heat upwards where it is lost. Then it drops down again. This creates currents. The currents cause continental drift. We learnt about this in school. 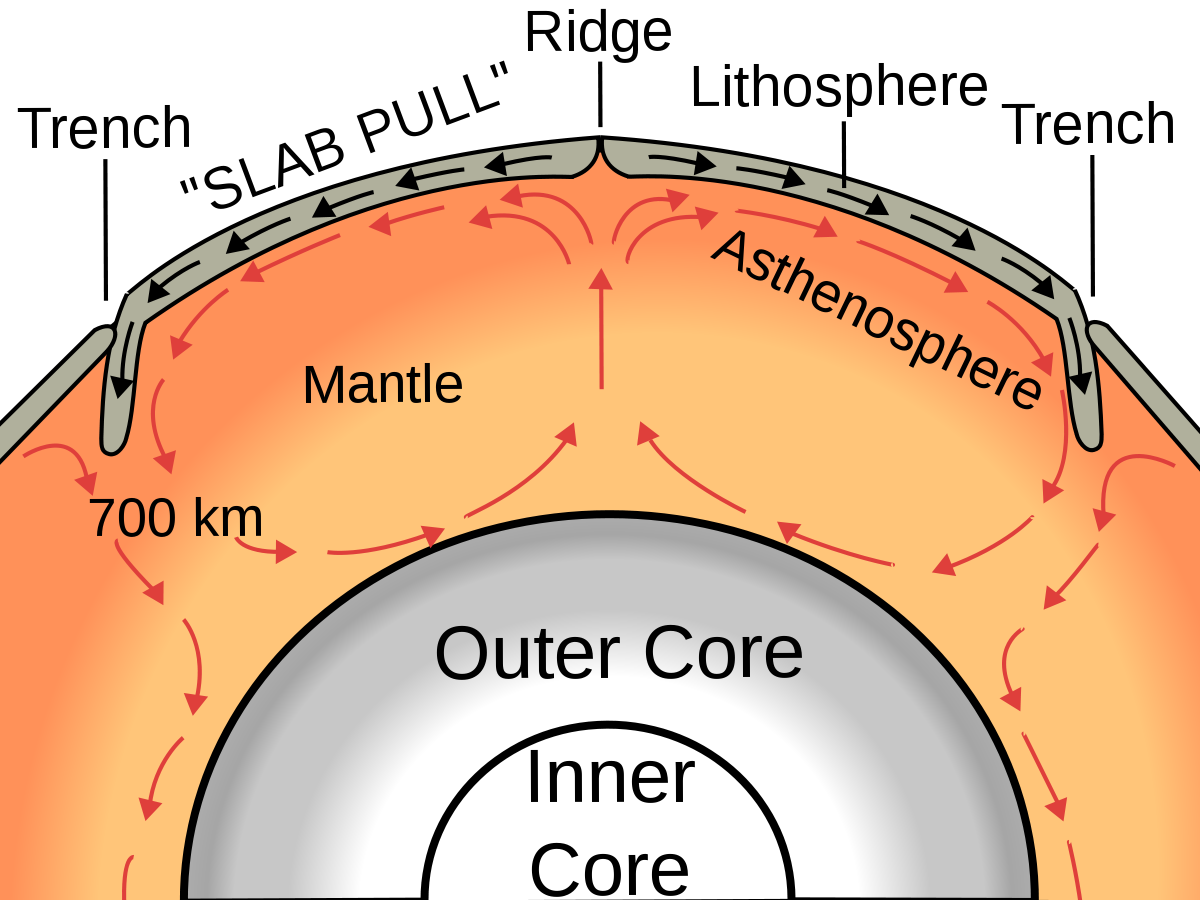 Since the fluid of molten rock works so well on Earth it will work in your fictional universe.

Does the difference in gravity make a big difference to the real Earth? That's something for you to figure out!

Not the answer you're looking for? Browse other questions tagged science-based geophysics thermodynamics .

12
What is the climate on a brown dwarf planet with split heat sources?
34
Is it possible for a substance to be thermally inert?
13
Weather and wind on a planet with a dense atmosphere
11
Defining a superfluid ocean
2
Making 4D Radiators Good Enough for Stealth, Unremarkable for Power
5
Thermocoupling a mega-structure
7
Does extreme atmospheric pressure increase or decrease the power of weather?
4
Tidally Locked Planet with no Oceans
3
Cryogenic weapon
1
Would larger oceans stabilize temperature on a smaller planet with a thinner atmosphere?