In this history, the army finds out a way of making reliable exosuits, but they can only help its user to carry more weight while walking and running, it can't throw cars, jump over buildings or anything that is super duper cool.

The thing is that I started thinking a lot about the structural design of the bulletproof armour that these soldiers are meant to carry, specially for the ones that ignore the military rules for amount of armour (because you can't be transported if you weight more than the vehicle) and try to be impenetrable fortresses, even if it means weighting half a ton. Simply put, they just don't want to die.

And even though I put a lot of thought on the structural design of the ballistic armour and its various layers, wouldn't it be simpler, cost-effective and easier to just fill bags with sand (sandwiched or not between plates of metal to increase its protection) instead of armour?

After all, it is what most soldiers do all day during war: dig holes, fill bags with the sand/dirty of the holes and pill the bags. A sand bag would be easier to replace than a goddamn ceramic vest with 10 layers, and soldiers could just empty them before getting in the choppers and escape punishment by their superiors (and be more vulnerable while transporting). 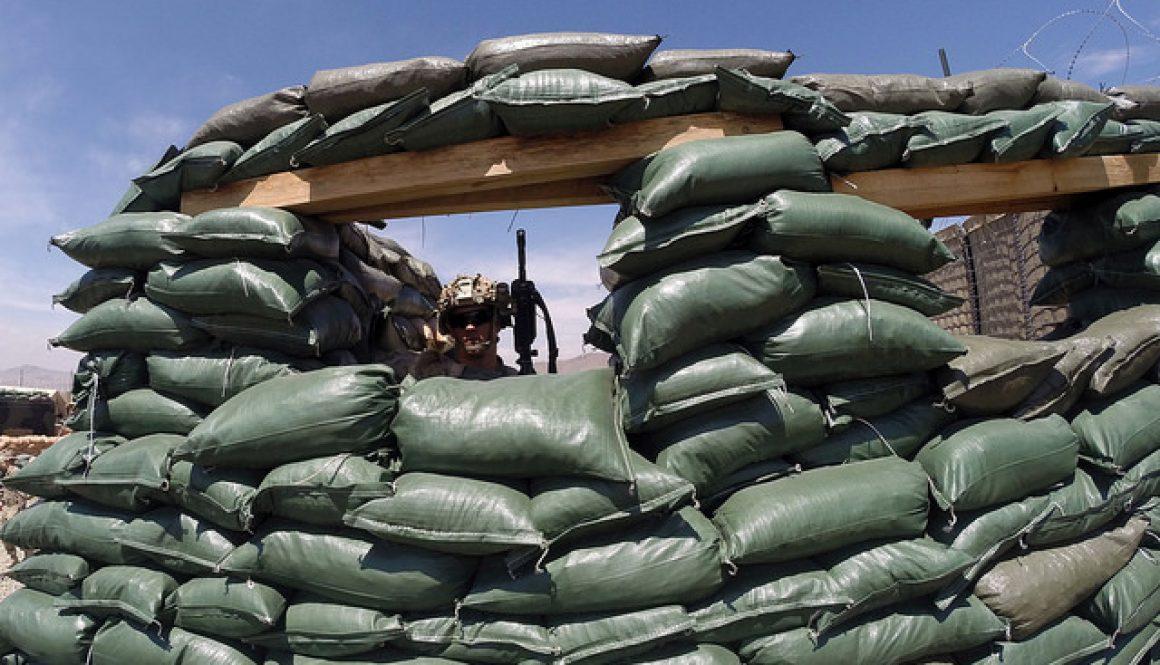 And the last detail is that, during a full scale war, the soldiers don't need body armour, because most of the causalities would be caused by weaponry so powerful that can easily erase buildings (like artillery bombardment). Maybe a half ton of ballistic/sandbag armour could help you, but if I knew the answer to that I wouldn't be asking here.

What would be better? Half a ton of Sand (and metal plates) or half a ton of ballistic plates?

Let's assume that the person making this choice is not a monster (want their soldiers to live) but has a budget.

We are also assuming that, being in some future situation, the weapons of war overcome any amount of armor. Scary!

The Answer is Neither!

We saw something like this, collectively, with the advent of common and powerful firearms and plate armor. Plate armor, though more mobile than many people think, did make people slower than unarmored. The coverage of plate armor was slowly reduced and eventually abandoned because being more mobile was more important than easily overcome protection.

The same situation seems to be going on here. Of the common weapons of war overcome your armor easily, ditch the armor and become more mobile!

As a side note, armor in modern conflicts saw armor reintroduced to protect against shrapnel and incidental contact. Incidental contact here would be things like hitting the top post of a door, getting hit by a falling rock, or being in the zone of shrapnel. See the history of the famous Brodie helmet, which arguably didn't protect against direct fire yet still made a difference.

If You Must Choose, Choose Armor Over Sand

Why? Because sand (generally) protects less than armor per unit of weight. This is because armor disperses forces better by having a much larger shear strength. This means it will have a greater set of weapons it can protect against. More protection means a more effective soldier which can translate into a more effective army.

While it may be true most weapons of war overcome armor in this conflict, the armor has the benefit of (potentially) protecting against arms available to civilians. Since taking and controlling land/civilians is one of the main objectives in a war, this armor may pay for itself once you get outside of the major military actions.

With the criteria present it seems price isnt a concern. But even so you can save costs!

Infantry armor has a tough job. It needs to stop the bullet, catch all shrapnel from the bullet and potentially the armor, do all that in a very small thickness so it doesnt restrict mobility, it needs to dissipate the impact as much as possible to reduce bruising/broken bones AND this all has to be light enough to be portable.

But your requirements dont need it to be light and you have up to half a ton of potential weight to carry!

A small (for Americans) personal vehicle can be armored against modern rifles for less than a ton of weight. But compared to several doors, the engine block and the windows you have a fraction of the surface area to protect! This gives you similar or higher armor protection than lightly armored vehicles.

Then there is futuristic armors. Some currently created Synthetic spider silks (made by Goats in their milk!) Has a high variety of strength, some of which is stronger than the strongest natural spider silks! If you can guarantee such high-strength spidersilks and can string it up under tension across the armor you can create thick layers of ultra-light high-strength armor. Add other potential metamaterials like various permutations of Graphene and you can make your infantry walking tanks who can only be killed by the concussive force of the hits they take, which would actually mean that armor would increase in weight to absorb more force and reduce sudden accelerations.

"But what about all the modern weapons that can insta-murder these guys?"

What about them? These already exist today. Any .50cal carried by infantry hitting you squarely will kill you and a vehicular mounted one has a higher power and fire rate. From there the size and lethality just goes up. The thing that would make future weapons more lethal would be the accuracy to actually hit. Which means that "armor" becomes "stealthy abilities" and "mobility".

Also most of the time you DONT want to level everything as holding on to infrastructure and the civilians that are part of it are important in one way or another.

Half a ton of empty sandbags.

... and a unit of unarmored soldiers with shovels further behind the frontline. Each sandbag weighs about 36 grams empty and will pack 25 kilos of dirt and sand if wet (or 16 kilos if bone dry). A filled bag is about 36 cm in diameter and 66 cm long. 500 kilos are thus something like 13700 sandbags and if wet that amounts to something like 344.5 tons of dirt in the shape of barricades.

Now, that's... about 9.1 kilometers of sandbags if you make a single file line. Or if you stack them 9 high (for a barricade of about 2 meters high) about one kilometer of trench. Well, better stack them 2 wide, always a side overlapping a butt gap and just 4 high... that's about one meter of breast height and about 0.7 meters of dirt to the side, and that over something like 1.1 kilometers. Or in other words: a sizeable "breastwork".

Do note, that these being sandbags excavated on site actually means that there's also a ditch of the same dimensions but downwards, somewhere in the back lines, where they have dug out the dirt. In the best case, the two connect and are side by side, and as the ditch is expanded and deepened the excavated dirt is moved along to the front side of the breastwork and used to increase its height and protection of it by adding even more sandbags. In other words: half a ton of sandbags is already quite a fortification, that allows moving in cover thick enough to not be killed by bullets safe for HE shells or something like a 30 mm Autocannon.

In other words: welcome to the trenches! You thought trench warfare was dead? Nah. Giving the engineers more carrying capacity just makes building the trenches faster as they now can haul 20 to 31 sandbags at a time instead of a single - and a single engineer in his frame can carry 13.8 bales of 1000 empty sandbags to the filling area.

5
Would keratin, spider silk, and bone make good bio-engineered armour?
43
Would armour made of spider silk work?
5
Would frictionless armour work?
6
Escaping the Snakebot of Doom
45
How would armour (and combat) change if the fighter didn't need to actually wear it?
6
How strong would graphene armour be? What is the best design?
4
Structural design of shoulders for rigid suits and/or armour, what would be the best way to make these?