The Earth is teleported into interstellar space for 5 minutes. What happens?

Humanity has just developed a star drive and begun sending their first probes, and have now discovered an unstoppable force of doom approaching to destroy the solar system. Their only option is to escape to another star system, but they don't have the resources or the time to build a fleet that can evacuate Earth before it's destroyed. Instead, they decide to simply move the entire planet.

A star nearly identical to the sun - about 1000 light-years away - is chosen as the target, and a series of drive installations are constructed. The drive can safely teleport Earth, but not all the way to its destination. Instead, it will jump to a point in interstellar space about halfway there, and then the drive will be recharged before jumping the rest of the way. This process will take approximately 5 minutes.

So, what happens in those 5 minutes?

Everything I've been able to find related to this is some variation of "what if the sun disappeared?", and the answers are always "We would all freeze and die.". I'm pretty sure that the Earth retains heat well enough that 5 minutes without sunlight won't cause a catastrophic temperature drop (But correct me if I'm wrong), so in this case I'm more interested in what effects the sudden disappearance (and reappearance) of the Sun's gravitation pull causes, and what effects losing the Moon has.

PS this is my first question here, tips are welcome!

Short term effects are pretty much covered in the other answers and are probably nothing of interest.

Then again, a great deal of things to fix later:

p.s. while at it, you may as well fix the calendar. Integer number of days per year, please. 350 is good - the weeks will align favorably.

p.s.2 inspired by the comments:

The knowledge that the year is not exactly 360 days is rather recent anyway.

On the other hand, we want a main sequence star and they have fixed mass/age/luminosity/temperature interdependence. We also want an Earth at most 1C hotter or colder than before so the star mass determines the distance where it is exactly warm enough and thus the orbital period.

The year/day ratio can be changed by changing either

Well, the point about the calendar was a joke. The project is hard as hell without bells and whistles.

Absolutely nothing happens except that it's night for about 5 minutes everywhere on Earth.

It would take several days for the tides to even out.

It would take several months for the foodweb to collapse.

It would take several years for the planet to cool below freezing.

It would take several millennia for all of the oxygen produced by photosynthesis to be used up.

At most you'll see wind patterns change as the temperature diffusion across the planet changes with no day side providing heating. However, in 5 minutes, even this effect is likely to be extremely small.

Bugs will come out early, birds will think it's night time and go to sleep, animals might bed down, winds shift slightly, etc... But overall, solar eclipses have no real lasting effects, and neither would your scenario.

Stix's answer is almost correct, but doesn't take the Earth Tide into account. To summarise, the Sun and Moon cause tides in the "solid" body of the Earth. It isn't rigid - nothing is on that scale - and the surface flexes up and down twice a day. The maximum movement is about 55 centimetres each day at the equator.

The flexing can be ignored for most purposes, but matters for things like the design of large particle accelerators, very precise GPS positions, and long-baseline interferometry. It also occasionally triggers small earthquakes.

The sudden loss of the Sun and Moon's gravity will cause the Earth to start to slump back towards the shape it would "naturally" have without them. This probably won't trigger any major 'quakes, but it's something that has never happened before, so it would be unwise to make strong predictions. It will be worthwhile to make the Earth appear after the second jump with the new star in the same position relative to Earth as the Sun would have been without the jumps, so that the slump gets stopped and Earth moves back towards its customary shape.

The lack of a Moon will make things seem different, though. Is there a plan to send a mission back to fetch it?

Also, most medium- and high-orbit satellites will have been left behind. We'll have lost geosynchronous communications satellites, GPS, and various other things. Launching new ones may take a year or two.

Mostly agree with sentiments so far not a lot will happen, other than the likely earthquake from the loss of tidal forces on tectonic plates. The sizes of the quakes are completely up to the OP, as no one knows when "The Big One" will hit, this might or might not set one ten or none off.

More concerned of placing a planetary body into the orbit of an existing solar ecosystem. Sol came into its present state though Aeons of a violent, truly catastrophic natural-orbital-selection. Now it operates like fine clockwork, most everything that could have went wrong did so billions of years ago. See theories like: Grand tack hypothesis.

Now take another solar system likely in the same state, it's worked out its bugs. And throw our little blue mote of dust into the finely tuned gears of that celestial dance. You may now find yourself out of the frying pan and in the fire. Very little of this mind you would be immediate. But for sure dropping a new gravity well into an established solar system will have it's consequences.

5 minutes of night during the day

That's about it. There's nothing really wild about interstellar space that could cause Earth harm. There'd be a fractionally higher exposure to cosmic rays, maybe. Not enough to matter in the span of 5 minutes.

We endure 10-12 hours of night on a daily basis without much worse for wear.

One thing I can't believe no one's mentioned is the interstellar medium and its likely effects. Everyone's always happy about what the Earth's magnetic field does to protect us from solar winds—no one stops to wonder what it is that the sun's magnetic field is protecting us from.

We're all so caught up on what suddenly isn't there, we aren't considering the big thing that now is.

The interstellar medium has a lot of different regions in it, with phases distinguished by the nature of the small amount of matter it contains—atomic, molecular, and in the worst case ionic. The reason these phases change so much in a relative vacuum is because of the enormous amount of interstellar radiation. True cosmic rays, not the watered-down stuff we get intra-stellarly.

To give you an idea of an approximate scale, the rems per year absorbed by a person traveling through interstellar space has been estimated to be about 70; the safe amount is at most 5-10. This is in a shielded vessel, which is a fairly nebulous concept. Unshielded, there are pockets of interstellar gas reaching hundreds of thousands of rems per second, on account of no stellar magnetic referee. It is the electromagnetic badlands, the radiation wild west. That's not different from the inside of a live fission reactor.

Whether our own planet's magnetic field would provide an adequate front against it over a five minute exposure is difficult to determine, but it's a huge risk. You would definitely see cancer rates rise. If we're in the wrong spot, we might actually not make it the five minutes. Given electrical interference from relativistic ions, you would also most certainly want to have every computer shut down that can be shut down, and would probably see a number of overloaded transformers and fires within that period.

The solar wind is what's batting this stuff back, and when it takes out a satellite or causes a power outage, that's just tough love.

While there's always some handwavium involved (at least until our hands can finally do it), I want to highlight that the relative reference frame of the planet is also important. If you're in the reference frame of the average radiation, your concerns are still significant but relatively minimal; if you're outside of this, you need to consider that the planet could be hammered by relativistic nucleons.

My speculative-fiction side wouldn't be surprised if we started seeing Cherenkov-blue streaks in the sky in some regions, as charge particles slammed into our atmosphere and were forced to slow down due to the relative change in speed-of-light.

So in short, what I am certain of is that cancer rates would spike over the next forty years from the massive amount of unbuffered radiation exposure, we would experience global power outages (something your wormhole might want to take into account), and probably some significant climate change down the line.

There's a neat paper speculating on the subject of relativistic ships crossing the interstellar medium, by Oleg G. Semyonov. You can find it at https://arxiv.org/pdf/physics/0610030.pdf . It isn't quite your question, but it's very related. This is excellent story material, so I encourage you to give it a read.

There would probably be some damage to the electrical infrastructure akin to what would happen during a severe solar flare, but without the aurora caused by the charged particles in the solar wind ( because there is none in interstellar space ).

As a supplementary answer, here is an image representation of what would happen, whole Earth at night: 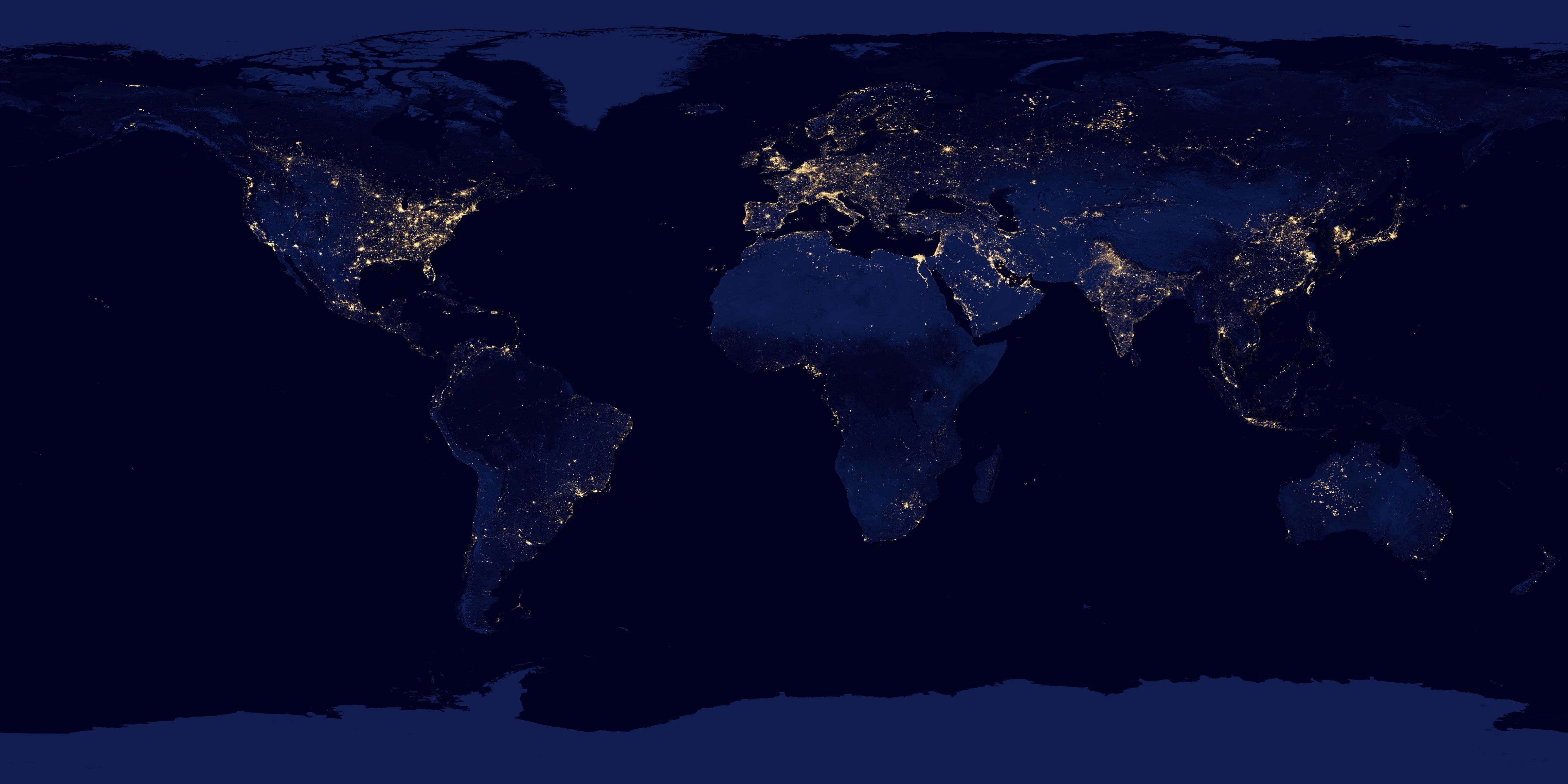 8
What if the earth were physically split in half?
16
What would the Earth eventually look like, if it was somehow stripped of its atmosphere today?
11
What are the consequences of literal interstellar travel?
19
What would happen to Earth if Yellowstone Erupted
11
FTL in a relativistic universe: can my scheme be exploited to make a time-machine?
1
Energy generation for spaceships
4
What would happen to the moon if Earth shattered?
50
How can I justify a Type III civilization using planetary jump drives instead of FTL starships for galactic commerce and travel?