My sci-fi has alien ships coming carrying warp gates. I figured that this technology would have steppingstones and other possible applications. One of which was propulsion without losing mass. 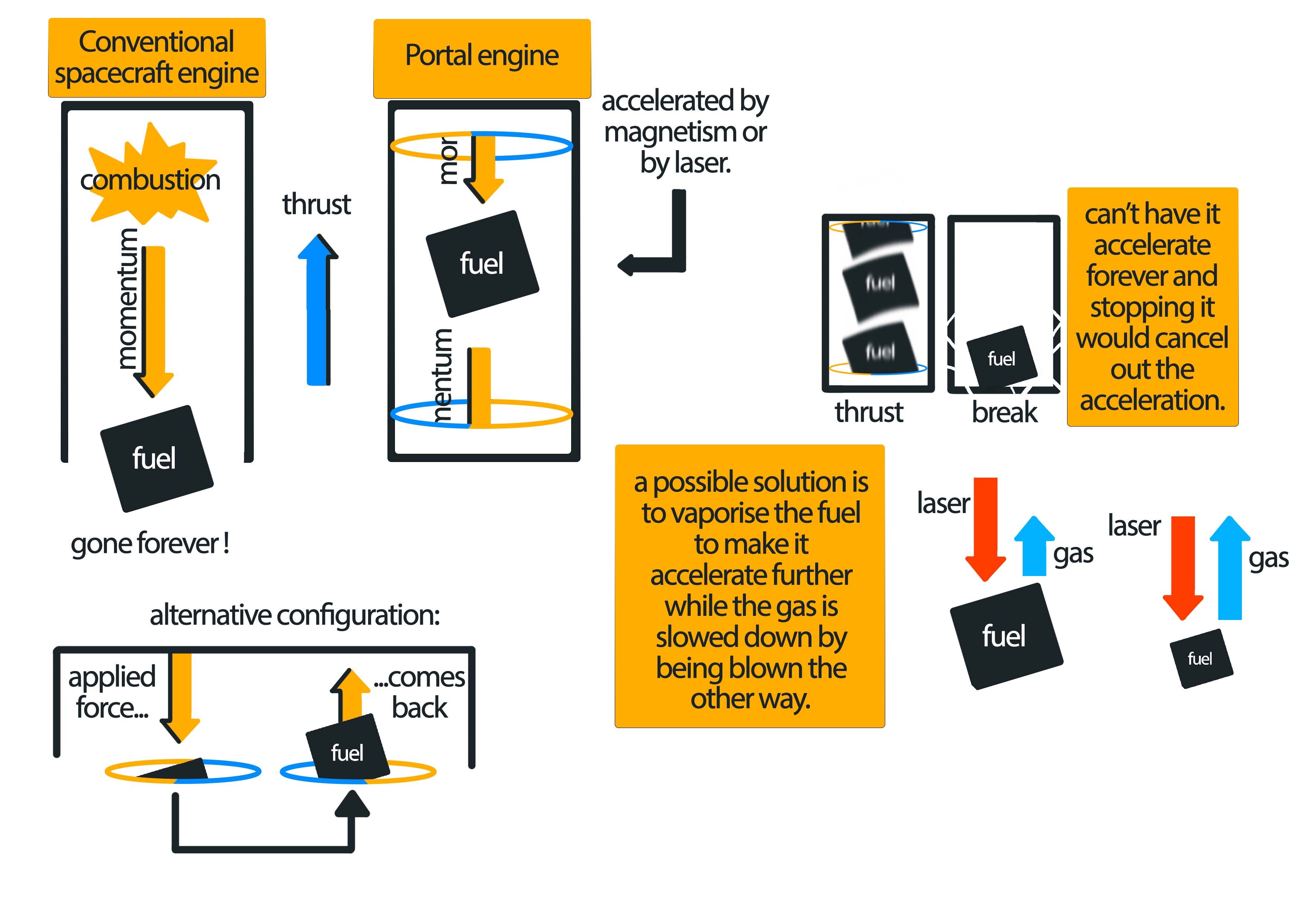 (The image says "fuel" but what I meant was "mass", sorry about the confusion.)

As you can see in the image, the concept is still in its infancy. Using a form of controlled quantum tunneling, matter is circulated in a closed loop. It is then accelerated to produce thrust and because it passes through a “portal” it can theoretically be accelerated forever.

You could have a metal rod passing through the portals and move the craft with wheels pushing the rod down. Or the same rod but with maglev instead of wheels. It doesn’t even have to be a solid, it could be running water or a gas.

This keeps me up at night. Does it work or not? Please explain why.

Thus does not really work for chemical fuels. They are literally turning their fuel into other things! So the recycling portal is not picking up more fuel, it is picking up exhaust. Exhaust which it cannot extract more energy from using the same chemical process.

If the "fuel" is for an ion drive, this scheme has some merit. This is because the thing which gets thrown out the back is the same thing which it needs to accelerate. (The "reaction mass," to use a formal term.) So you can use electric fields to accelerate the ship using the same ions over and over again. The ions get progressively faster, as does your ship, without needing more ions to lug around. It should be noted that this still requires energy to accelerate, so really some electricity is the actual fuel and the "fuel" in the diagram is a reaction mass (the ions).

This is unclear with these portals. Do the portals conserve momentum with the particles entering them? If mass and acceleration are the same for the particles going in/out, then the math technically works, because linear momentum is a function of mass and velocity, not position. Usually, an abrupt change in position means a change in momentum, but hand-wavey portals are now in play.

Conservation of energy may be the issue: several forms of energy conservation are position based. I suppose that is the cost of these portals.

There is also the issue of maintaining a portal in front and behind the craft. The portals need to move with the craft, otherwise it loops around infinitely. I suppose that could still be useful: accelerate in place to some appreciable fraction of the speed of light, and be really careful about when you turn the portals off and zoom into space.

It all depends on the details. Soooooo many details. "Portals" as you describe have been invented to make video games or stories fun, not always to solve proper physics.

One particular case stands out for me, however. I can't find the paper, but someone did an analysis on gravity with portals, and sought to ask the question of whether such portals could be made consistent with the known laws of conservation of momentum and conservation of energy. What they found was, if you let the gravitational field propagate through the portal, no matter where you placed the portals with respect to eachother, there was always a gravitational field that could be constructed between the two portals, thus conserving energy despite the apparent ability to let objects just keep falling.

They also showed that, for this conservation to work, the act of sending a portal from your location to its final resting spot must require (or release) energy. Lots of energy. You literally had to re-balance the entire universe, effectively dragging a planet behind the portal, so that its opening did not suddenly create nor release energy from the gravitic field.

They studied gravity, but its not hard to see how it could apply to other inverse-square laws (like the electrostatic forces used to apply force to an object). So, for at least one rendition of portal physics, we can say that shoving matter through the portal does not generate thrust, but that's only because we constructed the equations to make it so. You could easily construct an alternate (alternate-alternate) universe where it does generate thrust, and simply pay the piper by admitting that energy is not conserved. Or you may pull the energy/momentum from "elsewhere." There's plenty of games that can be played which involve some ancient relic from a past star-faring species that pays the fines for your physics violations from its own gargantuan energy and momentum stores.

No, as currently specified, it does not work.

Portals are tricky, and you should decide up front whether they conserve energy and momentum in your world or not.

As is, you are saying that the fuel exerts a force on the exit portal, propelling your craft forward thanks to Newton’s 3rd law. But how does the fuel actually exert the force? Does the portal have a surface or field that is acted upon, is there something behind the portal doing the pushing? Let’s simplify it and say there’s a little space-gremlin in your portal tossing a baseball out the back. As he throws the ball he exerts a force on the portal or whatever hardware holds him in place in the portal, which in turn exerts a force on your ship. He throws the ball, ship experiences a positive force (forward), ball experiences a negative force (backwards). But now the ball enters the return portal, and our space-gremlin has to catch it in order to throw it again. In catching the backwards moving ball, it exerts a negative force that cancels out the positive force. Throwing it again just gets canceled on the next catch. It’s like trying to fly by tugging yourself up by your own bootstraps, or powering a sail boat with a fan attached to the ship aimed at the sails.

This doesn’t mean you cant do it, just don’t make your portals conservative, or add strap on some handwavium momentum compensators or some sort of external power supply to make up for the mechanical energy imbalance.

Not the answer you're looking for? Browse other questions tagged science-based teleportation propulsion .

7
What mathematical function would describe the relationship between two moons?
28
What is the best way to use my two portals?
2
Is there a plausible way to exchange matter between spatial dimensions?
6
How does space between ends of a wormhole work?
24
A two-thresholds poison: how does it work?
4
For how much and for how long would a "Closed Cycle Nuclear Thermal Rocket Engine" generate thrust for a floating ship?