Where could spirits like ghosts and demons be visible in the electromagnetic spectrum? And how would they be able to do this? [closed]

Ask Question
Asked 24 days ago
Modified 24 days ago
Viewed 114 times
0
$\begingroup$
Closed. This question is opinion-based. It is not currently accepting answers.

The community reviewed whether to reopen this question 24 days ago and left it closed:

Right so I'm writing my story and I was going to make the spirit beings just turn invisible (just classic spirit stuff you know) But after reading in this website a fair bit, I prefer it if they just shifted from our visible spectrum to outside of it, and that would be much better because then if they turned completely invisible they wouldn't also be able to see (They can't see you, you can't see them - rule).

Now I dont know much about the history of "ghost hunting" and the equipments+method they've been using so I would preferably make my ghosts in the range of electromagnetic spectrum that famous ghost hunting equipments are able to see.

Also I want a viable way for them from being in our visible light spectrum to outside of it.

So basically I have two questions :

Handwaviums can be used a fair bit! 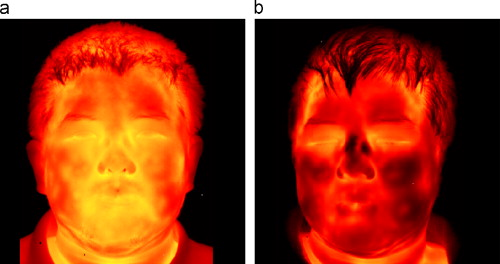 Ghosts are cloudlike creatures. Visible light goes right through them. They cannot be seen with the naked eye.

They are perceptible to humans as a clammy sensation because they are warmer than the surrounding air. This is because the large distance between the ghost molecules interacts with the long wavelengths of infrared light. Ghosts are visible on infrared cameras.

Some Ghost Hunters have eye cells that detect infrared light. Unfortunately but there is no room in their visual field to represent this light the normal way. They internalize the presence as a ghost as a strong intuition that something is there.

Your spirits are themselves made of electrical fields.

Because otherwise you could throw flour on them and see them. Not that there is anything wrong with that. Breading! But no- your spirits are intangible and consist of coherent energy fields which coalesce and move about according to ghost rules. They perceive the world (in a way) because external electromagnetic fields affect their own fields.

They cannot be seen because they do not emit electromagnetic radiation and do not block or affect extrinsic radiation of any wavelength. They can be detected by devices which detect electromagnetic fields, and possibly visualized using charged particles, which they do affect. So maybe the flour, but a cloud of static charged flour particles.

And they can be heard. Under certain circumstances, spirits generate infrasound.

Humans cannot hear infrasound but we might be able to feel it. Moving electromagnetic fields can affect our bodies as well. Ghosthunting equipment can definitely detect both the moving fields and the infrasound. Could we speed up the infrasound to frequencies we can hear? Yes. Be careful with that, though. Do you want to hear?

Not the answer you're looking for? Browse other questions tagged science-based vision invisibility ghosts paranormal .

26
How could ghosts be explained without an afterlife?
10
Can we identify distinct "colors" beyond visible light?
6
How to explain truly emotional ghosts?
3
Scientific reason for incense burners to be an effective ward against malevolent "spirits"
6
How much can I expand human color perception by adding new photoreceptors?
5
How to disguise a ghost with the Masquerade in full effect?
5
Extending the visual spectrum -- how far is possible and what would be the benefit?