Why would a language lack gendered given names? [closed]

Ask Question
Asked 6 months ago
Modified 5 months ago
Viewed 2k times
1
$\begingroup$
Closed. This question is opinion-based. It is not currently accepting answers.

Most real life human languages only have gendered given names (they can only be female or male).

In my world, there is a species of Euarchontoglires from the Homo genus named merfolk (their scientific name is Homo maritimus) (so, there are still humans, just not Homo sapiens). They do not like the merfolk from Hans Christian Andersen's The Little Mermaid (I do not want a psychedelic-looking organism, I want to go on a realistic way):

In the most common language spoken by merfolk, there are ONLY unisex names (that can be both female and male).

So, I wonder why would a language only have unisex names.

Many languages don't have gendered names. The Red Indians didn't 'Sitting Bull'. Polynesians have only a few and they're only gendered because some famous person had them in the past.

So basically any language where a persons name is not really important except to distinguish them from others will have often silly names.

In Polynesian culture a childs name isn't important, it may change if they do something important in their lives. Or it may change due to status. So for example I have a given name and a surname. But my chief name is much more important locally and it's how I'm addressed. My ancestors had the same chief name going back to a warrior a long time ago, both men and women. It commemorates a deed rather than a gender.

When I die one of my sons or daughters will take the name.

There are animal species where the gender is decided right before mating, like in the flatworm, in which when two of them meet each other, start fighting with their penises, and the losing one gets fecundated, thus acting as a female.

During this unique ritual, two flatworms will move toward one another, roll around together and then avert their penis and stylets outward. The two partners attempt to stab the other. This can sometimes result in injury but luckily wounds tend to heal within 24 hours. They are also trying to avoid being stabbed as a retaliation while they try to stab the other. The successful animal is then attached to its partner with its stylet embedded in the skin of the other for a couple minutes. At this phase sperm is being injected (Siefarth, 2002).

If your species works in a similar way, having gendered names makes no sense, because it will change from time to time.

Their language has no grammatical gender, like Persian or Mandarin. They just don't gender language.

As my examples show, this is compatible with ferocious sexism.

In a culture where there are good reasons for individuals to keep their gender secret except from their personal acquaintances, people will give their children names that offer no clues about gender.

Imagine a dictatorship where the ruling class is completely secure as a hereditary thing, and where the business of managing the country is done by specialists who are essentially slaves. In this society, the ruling elite will produce the occasional monster child, who will nevertheless fail upward because his comfortable position is unassailable.

Perhaps this guy has awful sexual appetites, and makes a habit of raping random women or even girls who strike his fancy. He gets away with it because all his victims fear reprisal should they report his actions -- he is known to be ruthlessly vindictive -- and because they all believe (rightly) that the ruling elite will not eject one of their own merely for mistreatment of worthless nobodies. If this situation persists long enough, word will get out that everyone should keep their wives and daughters away from this guy, lest he see something he likes, because he has learned that he can grab anybody by the p----.

If this situation persists for generations -- members of a powerful group are able to mistreat any regular person without fear of any legal or social consequences -- there will not be merely one such monster, but hundreds or even a few thousand. At that scale, you'll see innovation. There will be rich creeps whose courtiers curry favor by scouting for "choice" victims. There will be rich creeps who use the surveillance state's capabilities to literally shop for victims. Worse, one of the easiest ways for an unscrupulous poor person to improve their station will be to bring some unknown treasure to a rich creep. And the rich creeps will use their power and wealth to incentivize this behavior, to reward it, to make it mainstream, and to direct it to be more efficient.

In a society that has made a cottage industry of helping the ruling elite find ideal victims for their vicious appetites, every person will have an incentive to conceal anything about themselves that might draw that kind of attention. They will not post their most flattering photos on the internet for strangers to see. They will not humble-brag about being young, or fit, or attractive. Everyone will dress in shapeless clothing. They will probably all have blank public profiles with androgynous names that sound unpleasant; names that sound suggestively like bacteria will be popular, at least as official names of record. Privately, in direct conversation with their acquaintances, people will have nicknames that are less repulsive.

The ruling elite will of course do the exact opposite, as just one display of their power. They will all have names that clearly signal gender, their style of dress will flaunt whatever they've got, and they'll pretend to not understand why the downtrodden do otherwise.

What I take from all of these is that some people will use power to take the people they want if they believe they can get away with it. A permanent ruling elite, such as I've described, always gets away with it.

Mermaids are as sexually dimorphic as stingrays. Their sexual organs are inside the body. They do not have nipples. Men and women of the same size are equally strong.

Females are a bit bigger, but since mermaids never stop growing it is hard to tell a female from a slightly older male.

The sex of a speaker is only important if you are up close and interested in breeding. Even then it is not crucial to know who has what genitals, since reproduction works like this: 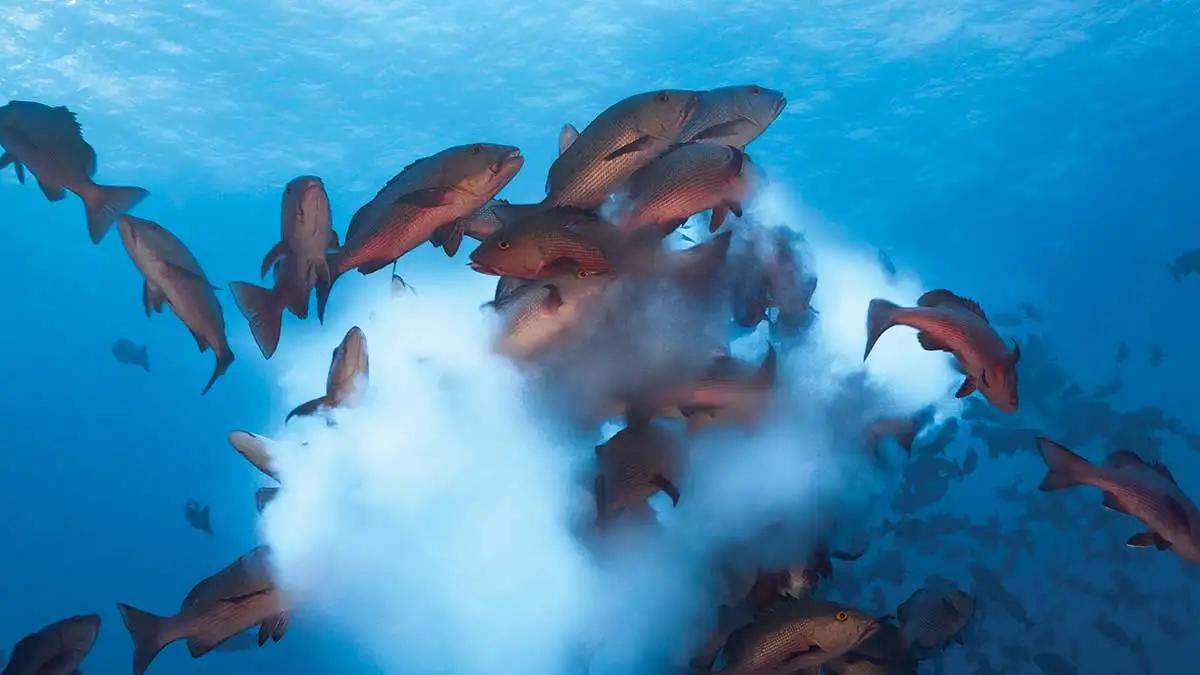 For humans we pick out a partner, check they have the correct genitals, and then try to woo them. For mermaids you divebomb into the baitball of other mermaids and spray your zygotes all over the place. They get mixed up with the eggs and sperm of the other mermaids. Mermaids don't know their mother or father.

On top of this, mermaids are solitary outside the mating season. They communicate mostly by singing from hundreds of miles away. At this range you cannot see the other mermaid. There is way to tell who has what genitals, and no reason to ask.

As a result their language didn't evolve to say who is a man and who is a woman. Even on accident.

Their descriptions of each other do not take gender into account

I wrote this as a comment, and then gave in to write it as a full answer.

Names often originate as descriptions, as mentioned in other responses and comments. So, if the (originating) language is/was gendered, then the description is altered (e.g. Os instead of As, or different suffixes, or what have you). This is not necessary in a grammatically non-gendered language.

In my opinion, I would go further and dispute that names are gendered in any other sense whatsoever. Just because a society chooses not to name its sons "delicate flower" and daughters "conqueror of armies" even when these are apt, doesn't make the description itself gendered in any way.

Often names lose their original descriptive quality, sometimes getting shortened or pronounced differently, but that doesn't change that they were originally a masculine or feminine description at the time. I would argue that the more distant a name is from its original description the less people care about the gender of the child they give it to even now. This could be a cause of more unisex names even from a very grammatically gendered original language.

However... The OP's examples are all based on descriptions, and the most obvious reason would be that the merfolk are equally open to applying these to either gender, and that they do not even consider whether a specific gender is "meant to" or "not meant to" exhibit traits that fit those descriptions.

England has the phenomenon that some male-gendered names get adopted by women, resulting in less male adoption of that name (e.g. "Evelyn"). There are also names that shorten the same (if you meet a Sam, are they Samuel or Samantha? Or just Sam?), names that come from the same root, often via a language which does have grammatical gender (Alexander/Alexandra) and names that have come from a male name with a female gender marker stuck on (Nigella Lawson, daughter of Nigel Lawson, is the example that comes to mind). So we can see that English names are only gendered to some extent.

You could just not have grammatical gender, which makes life much easier. Finnish doesn't.

Simply Put - Gender Matters Very Little
If the offspring are self-feeding after a few weeks of nursing and everyone is responsible for their own food gathering after that, gender matters very little in a biological sense.

As others have stated, many human cultures have names that are far more status/accomplishment focused than gender-role focused. If there are no gender roles beyond pregnancy and a few weeks afterwards, there's no motivation to focus on it as a defining part of their culture. They can focus their naming based on accomplishments in philosophy, poetry, song and coral gardening.

24
Fantasy Macro Economics: What would Merfolk trade for?
3
How could my hybrids from species of the same genus with radically different appearance have more fertility issues but still be mostly fertile?
10
Why would a language created by humans lack the /j/ semivowel and even the /i/ vowel?
6
What would my phylogenetic tree composed of sixteen Homo species look like?
7
Could interspecies blood transfusion from organisms of various sizes occur?
12
Why would a society be matriarchal but patrilinear?
0
What gene could have a mutation that makes humans have blubber?