Can people survive at the bottom of the dry Red Sea? 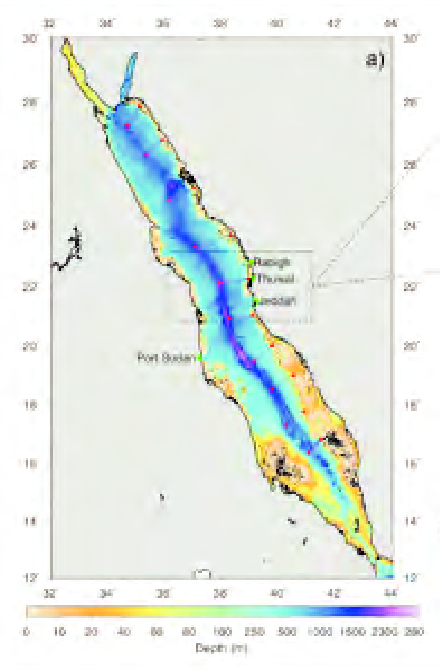 In 2055, a coalition of world powers completed the Red Sea Dam, a 30-km structure spanning the Bab-el-Mandeb at the south end of the sea. Construction of the dam was initially proposed to permit the creation of up to 50 MW of electricity using water that would be allowed to enter and fall to replace that which evaporated. However, pursuing a prophecy to build a new homeland for the Palestinian people, the goal of this project became not merely to lower the Red Sea, but to "utterly destroy" it (and in so doing to increase the potential power generation long term). Therefore, additional dams were built to buttress the increasing difference in sea level, and the project was reinforced over a 2-km width between dams by depositing a functionally waterproof cement made with a large proportion of sodium and calcium carbonate [Note: those compounds are not themselves waterproof, but are added as a bulk structural material as a means of CO2 sequestration]. This was 1.8 cubic kilometers of material, enough to ensure even sustained nuclear attack does not flood the interior. Nonetheless, with humans emitting over 35 billion metric tons of CO2 per year, it was not nearly enough material to sequester the world's CO2 output even for one year!

By 2250 the outcome is a Red Sea surrounded by shipping/recreational canals at the old sea level. Streams, aqueducts and agriculture are abundant deeper inside, because the hundreds or thousands of meters the water is permitted to fall (before distribution or after it is returned as waste water and processed) provide enough energy to desalinate it. Evaporation of the water, which becomes lighter than air as water vapor, provided the energy to continue. The surface of the soil is being cleansed of salt by the infalling fresh water. Part of the electricity is also budgeted to return salty water from the bottom-most part of the former sea, and there should still be power left over to provide electricity and fresh water to the wider region.

Now the question: the very center of this sea is very deep, just over 3 km. Given the scale height of Earth's atmosphere is about 8.5 km, this means the air pressure is about 1.42 atmospheres. The environment should be very wet. Even if global warming has been partially reversed, the heat is likely extreme - perhaps worse than Death Valley. In addition, geological features associated with the seafloor spreading zone will be exposed to the air. A group of pilgrims seeks to visit this undeveloped region on foot, regarding the volcanic features to be a new Mount Horeb symbolizing the process of creation. We can assume they choose a less unfavorable moment in terms of weather. How severe will this environment be for them?

About 6 million years ago, plate tectonics conspired to close the strait of Gibraltar. The Mediterranean Sea, which receives much less water from the rivers than what it loses to evaporation, promptly went almost dry. The episode is known as the Messinian Salinity Crisis.

The climate of the abyssal plain during the drought is unknown. There is no situation on Earth directly comparable to the dry Mediterranean, and thus it is not possible to know its climate. There is no consensus as to whether the Mediterranean Sea dried out completely; it seems likeliest that at least three or four large brine lakes on the abyssal plains remained at all times. The extent of desiccation is very hard to judge, owing to the reflective seismic nature of the salt beds, and the difficulty in drilling cores, making it difficult to map their thickness.

Nonetheless, one can study the forces at play in the atmosphere to arrive at a good speculation of the climate. As winds blew across the "Mediterranean Sink", they would heat or cool adiabatically with altitude. In the empty Mediterranean Basin, the summertime temperatures would probably have been extremely high. Using the dry adiabatic lapse rate of around 10 °C (18 °F) per kilometer, the maximum possible temperature of an area 4 km (2.5 mi) below sea level would be about 40 °C (72 °F) warmer than it would be at sea level. Under this extreme assumption, maxima would be near 80 °C (176 °F) at the lowest points of the dry abyssal plain, permitting no permanent life but extremophiles. Further, the altitude 3–5 km (2–3 mi) below sea level would result in 1.45 to 1.71 atm (1102 to 1300 mmHg) air pressure, further increasing heat stress. Although it was probably quite dry in the Basin, there is no direct way to measure how much drier it would have been. One can imagine that areas not covered by the remaining brine would have been very dry. (Wikipedia, s.v. Messinian Salinity Crisis)

Bonus! There is at least one paper (by Julien Gargani, Isabelle Moretti, Jean Letouzey, "Evaporite accumulation during the Messinian Salinity Crisis: The Suez Rift case", Geophysical Research Letters, 16 January 2008, https://doi.org/10.1029/2007GL032494) making the case that the Red Sea was connected at Suez to the Mediterranean, but was not connected with the Indian Ocean, and dried out along with the Mediterranean...

6
Can a terrestrial planet have a long lasting hurricane like the great red spot?
6
How many people would survive the nuclear winter after a full-scale nuclear war, and where?
5
How can Mars have life but still be "The Red Planet"
5
Giant rift with lava at the bottom
4
What would the atmosphere of the Archaean Earth look like? (Before massive oxygenation)
7
Can I eliminate a dry continental high pressure spot inland by adding a huge body of water in the middle of it?
9
What geological and climatic factors could result in a planet where the only biomes are oceans, deserts and wetlands? A wet OR dry world