Monomolecular wire bolo rounds: how to make it work?

In the near-future story I'm developing, I've tried to incorporate all kind of somewhat-credible technology into weapons and gadgets.

I had the idea of what's basically two shotguns fused together, kind of like this: 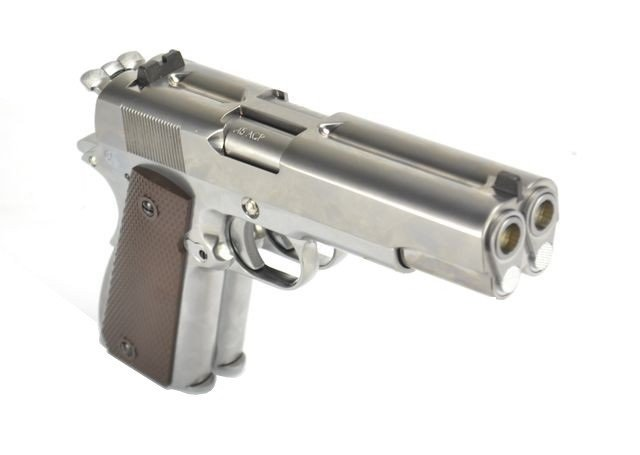 The initial idea was it to be full-auto and that each side shot one 10ga. tungsten bird-shot at a time so it would double the rate of fire and cover a large area.

Then I thought, wouldn't it be cooler if each side shot a slug connected by a a monomolecular wire that stretches and cut the target in half? Hell yeah it would.

The composition of the wire is not important, I just want to find the best way that this could mechanically work.

The problem I'm facing is, the barrels need to be parallel so I thought about having slugs that are aerodinamically shaped to spread to the sides. The question is, which shape could this be? Not so much that it would extend the wire to the limit and spring back together.

Would it be more practical for each side to shoot the two connected slugs at a time? At second thought, I think it would.

What do you think?

A problem with dual barrels, by the way, is that if one of the guns jams, then the cord whips around and kills the user.

I am reminded of the medieval chain shot projectile, which was two hollowed halves of a cannon ball with a chain inside. It was a very effective anti-ship weapon and had useful effective antipersonnel. This was fired by a single barrel cannon.

A modern round should also use a similar concept, even if the wire was only a molecule thick, although that thin is (pardon the pun) stretching it. True, it may not be as effective, though the ease of use and reliability would more than compensate.

And, actually, these rounds exist in reality! Kind of, anyway.

The question becomes, are these bullets any more effective at killing people than regular bullets? Dead is dead. You could "invent" smart bullets which always hit their target. There are international laws which prohibit making weapons specifically to cause more pain. Is this supposed to cause terror or something? Modern bullets are fairly deadly already. Bullet design has not changed much over the past hundred years or so because they do their job perfectly well.

The issue with monomolecular wire is that it is only as strong as the molecular bonds holding the molecules together. Many of the "super materials" we are inventing have an "equivalent strength" ratio. Spider silk is five times stronger than steel, but we can easily break it due to how thin it is. Pretty much anything is weak when you make it thin enough. Such a shot would snap once any amount of force was placed upon it. The weights on each side would be more than enough to cause it to break.

You could potentially utilize carbon nanotubes, which are much larger than a monomolecular wire but still rather thin. A multiwalled carbon nanotube was tested to have the tensile strength of 9,100,000 psi. If you also utilized the smart bullets, they could auto target the victim's body and separate into two halves with a length of carbon nanotube between them. You would not need to invent a new double-barreled gun, just have the special bullet. It would likely need to be a gun capable of selecting a target prior to firing so the bullet would know how long to wait before deploying the wire. There would also need to be a certain distance between the gun and the target to allow the bullet to deploy properly. The gun would also not be rifled as spinning the bullet would mess with the targeting of the wire. This would limit its effective range making it a short to medium range weapon. The auto targeting aspect of the bullet would reduce the inaccuracy caused by the lack of rifling. There would also likely be a chance of bullet failure as sudden acceleration might damage the internal electronics. The margin of error can be whatever you deem for plot convenience. If these are fired by the enemy, the rate of failure would likely be higher. If they are fired by the main character, the rate of failure would be whenever drama is needed. Being able to fire this full auto seems a bit much, as each one would potentially kill its target unless plot armor gets in the way. Although… if carbon nanotubes are common, they would likely use it for armor as well. A strong flexible very thin armor could potentially prevent these bullets from working at all. You could always make these bullets a new development and state that armor technology has not caught up yet. Each time a new weapon is developed, people try to figure out a defense against it.

The first issue you'll face is the probability that the explosive charges won't be aligned. One goes off a millisecond before the other, and it'll go flying off to one side due to one side pulling on the other. For a bullet moving the speed of sound, it'll move 13 inches every millisecond.

You could time the charges better by connecting them with with a shared high-explosive fuse, but then you'd have to connect the insides of the barrels. You'd probably want to for the cord in any case. Otherwise, you'd have the cord running through the barrels, and that would be bad.

For separation, here's a fun sci-fi-ish possibility: Make the cord out of memory-wire that reverts to its original shape when heated. It wouldn't need to snap into a solid bar, it would just have to act like a spring.

Alternate possibility: secondary charge. The wire is coiled up between the two bullets. Have the shared fuse also light a slower fuse that blows a tiny secondary charge, wrapped in those coils. Not enough to damage the wire, but enough to push the bullets apart. You'd need to optimize it for a specific range because the bullets would have a tendency rebound back into each other.

Yea, monomolecular wire isn't a real thing right now, but science is funny. They keep finding things that change the paradigm, like lithium-sulfur batteries or new phases of matter. Admittedly, this would be on scale with something that you could build a space elevator out of, but it downgrades the idea from "impossible" to "implausable," and that's enough if you wrap a good story around it.

This is pretty much exactly what a Taser does. It fires two prongs into the victim and runs a current between them. It does this by having multiple barrels. 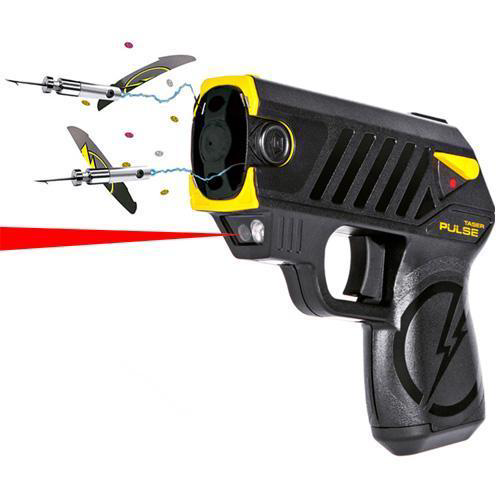 Not the answer you're looking for? Browse other questions tagged science-based science-fiction weapons engineering guns .

11
Could a Neptune like Gas Giant support life?
50
What is the amputationility of a monomolecular wire weapon?
3
How can a magical perspective enhance science?
3
How do I make a new and interesting type of "Zombie" creature?
2
Creating a steampunk-esque/cybernetic "Big Iron" revolver
6
Realistic rollerblade steam propulsion device, like something that might have been invented with 18th century technology. Is it possible?
4
How would Roadhog’s Scrapgun work?
18
Making Suitable Clothing For Fire Mages
11
Are AP slugs for shotguns possible?
4
Time Dilation and Melee Combat