How much safer would a spaceship clad in ice be?

Seeing as the brand new James Webb Space Telescope's main mirror was recently hit by a micrometeroid, I figured that now would be a good time to ask about spaceship hull protection. When we think "spaceship" we probably imagine a large hunky piece of metal floating through the vacuum of space. Space which is filled with particles moving at high relativistic speeds. No wonder they are hunky! Since a pebble could cause lots of damage the craft would need to be well protected and every subsequent collision would give more things to repair... SO! Why not use an outer-coating of ice?

In story, I've already established that the spacecraft needs water in order to function. The engineers logic for that was "where there is water, there is life". So the ship (which is piloted by an A.I.) actively seeks out water during it's exploration of the universe. It harvests water for propellant from comets, meteors and other sources to keep it going. Hydrogen can be extracted from water for energy storage, to feed the fusion reactor and for cooling systems. So forming an outer-coating of ice would be like having a large "battery" of sorts, instead of just deadweight.

This armour of ice would give the ship the appearance of a comet or meteor, unintentional camouflage but a welcome feature. I guess if you feed on meteors the meteors eventually fight back. Heheh! Anyway... the REAL selling point of the coating of ice is that it does not need to be repaired, unlike the actual ship which is made of uncommon materials. Water is fairly common, can be melted and frozen again and can be added or removed from the hull if need be. Safe and customizable!

Oh, and if you're asking about how the ship steers with all that ice on top of it, the answer is simple: it makes holes. Drilling, microwaving, lasers... there are many options.

So the question stands: how much safer would it be?

Depends on how fast is your ship moving

If you are just floating in the sun's orbit, a particularly fast, large micrometeor could hit you at speeds of up to 72kps yielding about the same impact energy of a .577 Nitro Express elephant riffle which will be stopped by just a few feet of ice. The micrometeor will completely disintegrate within just few mm of impact, but the shockwave will travel shattering the ice much deeper. If you store your ice in interlocking layered blocks instead of a giant solid mass of ice, it will improve your protection by disrupting the shatter lines. Depending on how cold the ice is and how well segmented it is, you could probably stop the projectile with as little as a foot of ice.

However, let's say you setting includes relativistic space travel that allows your ships to travel at 0.9C (270,000kps). At these speeds, the same micrometeor would strike with the explosive force of about 30 tons of TNT. Given the highly concentrated cone of energy caused by such an impact, you'd probably be looking at a damage profile similar to a GBU-57A/B Massive Ordnance Penetrator meaning you would literally need hundreds of feet of ice to stop the micrometeor. If you are moving at these sorts of speeds, something better than ice will probably be needed.

Not that much. There's two big problems with ice that negate a lot of the armor benefits.

First, it sublimates. If you're within the frost line, the region of the solar system where the sun is bright and warm enough to melt ice, your "armor" will disappear over time. On top of the obvious losses in protection, outgassing will also apply forces to your ship, changing your orbit in difficult-to-predict ways.

Second, there are plenty of important parts that don't react well to micrometeroid impacts that can't be within the ice shell. Your radiator, solar panels, probably most sensors, probably most communication equipment. Sure, you can protect any crewed areas, fuel tanks, service modules, but they're small compared to radiators and solar panels, meaning they're less likely to get hit anyways.

Like @Nosajmiki, its all about kinetic energy. Also, you may want to improve the mechanical properties of your ice for example putting some silicates in it. Or maybe something a little fancier. But to test your idea out you could fire up your electrothermal accelerator and shoot glass beads with diameters between 20 and 80 µm, masses, between 1.7 · 10−11 kg and 7.2 · 10−10 kg) to velocities up to 11.8 km/s. It turns out out get craters and some spallation. In general they find the amount ejected goes up exponentially with energy. 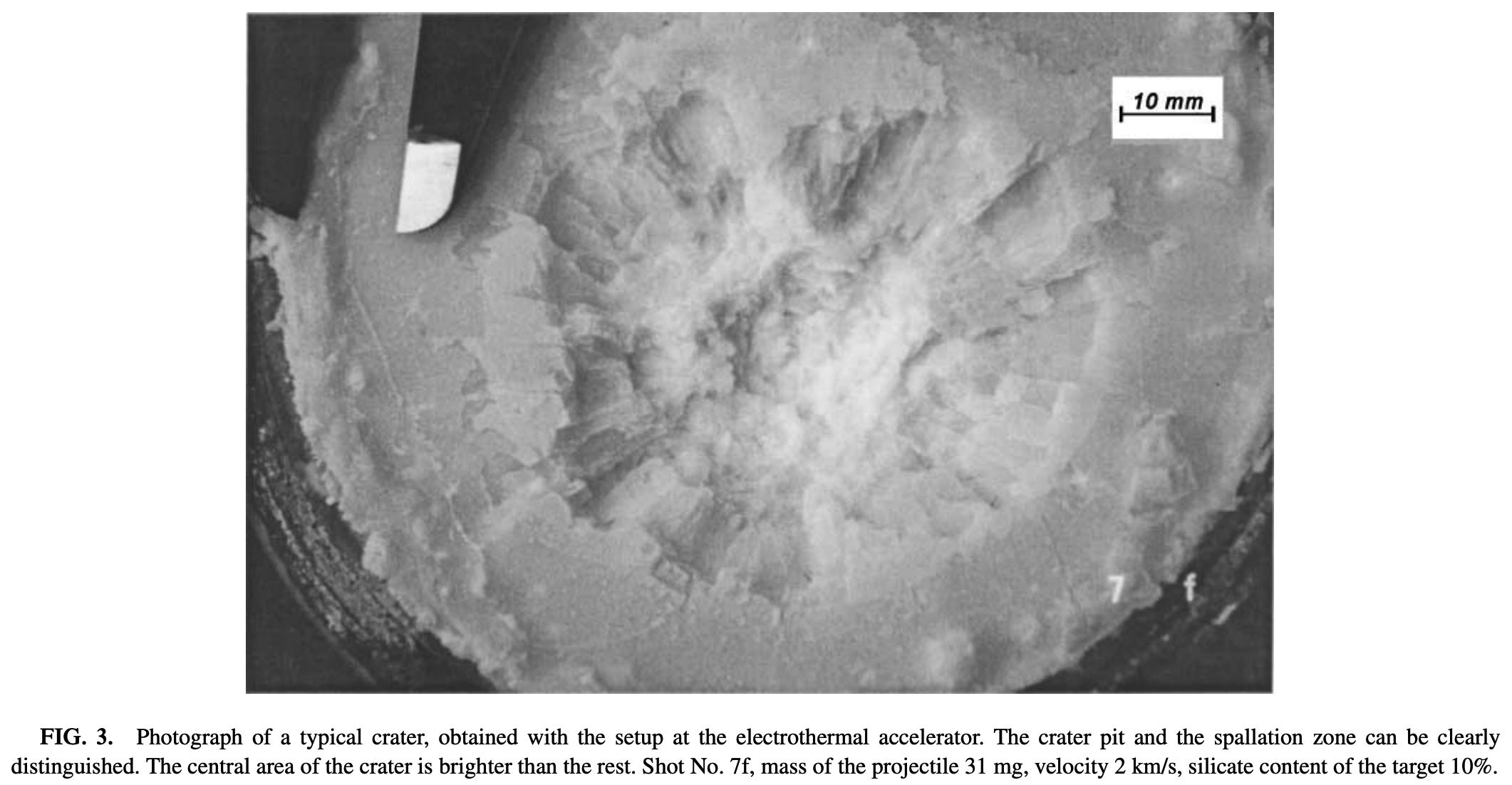 As for safety, those micrometeoroids 10-15 km/s isn't unreasonable for space debris, and even paint chips are a real problem. It could offer some protection and could be replaceable. But maybe there are there are other issues and limitations where you can put it. For example you may want to radiate extra heat off into space or other thermal considerations.

Not the answer you're looking for? Browse other questions tagged internal-consistency spaceships protection .

92
Would a submarine make a great spaceship?
10
How would a merfolks spaceship take off?
4
What's a safer design for a relativistic kill vehicle?
5
How hot can I make the insides of my spaceship before damaging crew too much?
28
How much gravity should I have on my spaceship?
0
Can ice asteroids cause an icy ship
32
Keeping a retro style to sci-fi spaceships?
2
What systems would be needed to keep two halves of a spaceship viable for humans?