There are several explanations that I'm aware of as to why the Easter Island culture collapsed. While Diamond put forth a hypothesis of deforestation, soil nutrient depletion and cascading environmental effects, I'm going to limit this question to a rival hypothesis: disease and slave trade from European contact.

Suppose a Rapa Nui mystic has a vision about the dangers of foreign peoples arriving on gargantuan and fantastic sea vessels. His divination / interpretation of this vision was: 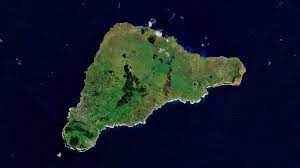 Supposing that this mystic had absolute authority into influencing the Rapa Nui court at the time, could Easter Islanders prevent landfall at their level of technology?

Note: Population of Easter Island at time of contact was said to be ~3,000.

Note II: Would also be nice to have estimated timetables but not a must.

There's no amount of fortifying and "turning inward" that could protect the population of Easter Island. Determined Age of Sail explorers would have found a way on to the island, and once that happened, the diseases were loose.

So the Rapa Nui must turn outward. They must become explorers themselves.

The nearest continental country to Easter Island is Chile. The Spanish conquest of Chile began in the 1540s, so the Rapa Nui have nearly 200 years to acclimatize themselves to European contact through contact with Chile.

The Rapa Nui could send multiple sacrificial missions to Chile, with the understanding that many (most?) of these explorers will die of disease. The ones that survive and return to the community are the citizens with natural immunity to the various Old World maladies. They should be revered as heroes, and honored within the community.

Over time, the community would build up resistance to European disease, and thus be able to survive "first contact" when it comes in the 1720s.

The explorers have ships full of cannons. If they can't make landfall due to some sort of coastal fortification, they have enough gunpowder and ammunition to literally blow them away. If the natives hide, the explorers might still find the villages, and even if they run, that won't halt them from putting the island on the maps and doing water stops there in the future.

With each ship come the typical illnesses of the explorers, and even if they run to the hills every time, some of those might come rather desperate for the embrace of someone - and pursue them to the hills. These sailors bring with them illnesses that will spread like wildfire.

Other sailors might have even worse motives, going after the fleeing natives just to take them as slaves or kill a few so they can take back body parts as trophies.

And then there might be an expedition that just mixes up the islands, and believes that Rapa Nui is one of those anthropophage islands, and they disembark with the very plan to kill everyone that is native to the island.

Besides those doom scenarios, the island was already unable to support the population due to a lack of wildlife and soil erosion. Even if the explorers don't bring death to everybody till 1890, the population was steering towards near-extinction around the same time anyway.

In short: Rapa Nui is doomed.

No they couldn't prevent anything.

The Moriori of the Chatham Islands had that scenario. They were told by their leaders not to fight the invading Maori and were genocided in some pretty nasty ways. The women and children were tortured for days.

A population of about 2000 who outnumbered the invaders all died without a fight with only 100 remaining alive as slaves. And they were not allowed to have children.

Not even if they imitated the Japanese.

Japan was the only Asian [island] country to escape colonization from the West (ref).

This was due to many factors. Tanegashima Tokitaka (ref) bought two guns and had his smiths work on copying the design, Japanese was an unified country that would rather join arms with the blood-feud neighbor Daimyo than work for the foreign powers and so on (ref).

But Easter Island had only abundant volcanic rocks, basalt, trees, and obsidian. As a volcanic island, it had negligible deposits of other minerals.

Explorers and navigators refrained to conquer Japan only because the costs outweighed the benefits.

Seems like the island supported a population of about 3000 people when the Europeans started showing up, on a landmass of about 60 square miles.

It seems plausible enough to me that the islanders, with some prophetic forewarning, could notice the approaching ships before they themselves were seen, and that they could hide themselves until the newcomers went away.

They might need to stay on alert for ships coming in to take on fresh water or other supplies, but I think they could manage.

Independence Day may not seem like a masterpiece of deep thought, but one solution suggested there could work: ruin the island to the point where nobody wants it. Chop down all the trees. (Done?) Fight wars to reduce the population to a fraction of what the un-ruined island could support. (Done?) Move agriculture into concealed underground locations in lava tubes (as some tell it, this was actually done, in part because the very scarce fresh water of the island could be contained in those locations). And remove as many signs of human habitation as possible, starting with those accursed statues that bring in the tourists to this day. Bring fire around to every clump of vegetation during every dry season. Make the island look barren and useless.

But above all, ruin the fresh water. The way it actually happened, residents led the Europeans to an inland well. There are no permanent streams or rivers on Rapa Nui. There are three craters that accumulate water, and any number of handcarved basins and inland wells. Some brackish water can be obtained from coastal wells. If your people conceal or destroy all artificial sources, and have guards stationed who are ready to dump salt and filth into the natural craters, they can give the impression of a worthless, waterless island - the sort of island that colonists have ignored to this day, though improvements in small-scale desalination are about to change that. (Of course they should also prepare extensive stored water in clay jugs in their underground caverns) To prevent the explorers from building coastal wells, the residents can put one or two wells at the coast that look like they were dug by short-term visitors to the island, but which are at locations where they happen to tap into salt water only.

Yes, the explorers could scour every inch of land, track down the people living in hiding, "make it work" for them. But they probably won't. They'll keep exploring until they find something they can see more profit in.

Not the answer you're looking for? Browse other questions tagged internal-consistency alternate-history .

17
Wealth of an island-castle
7
Could crash survivors on an island for months smelt and craft iron tools?
0
Optimal altitude for an airborne floating island
18
Citizenship removed and deported to desolate Island, viable alternative for prison?
2
Living on an Island - Minimal Population for Free Choice of Partnership
0
How significantly would the course of rivers change over 10,000 years?