How to put up road signage for wormholes?

Set in year 2615 A.D. humans have colonized nearby star systems, we can travel between different star systems using artificial wormholes. A spaceship leaving Solar system for Alpha Centauri have to find the correct wormhole then fly into the sphere, the inside space is the surface of another wormhole located within Alpha Centauri. There are countless wormholes littered across the our neighboring star systems, fortunately these wormholes are the size of Moon and most registered spaceship have a updated coordinates of these wormholes. (No FTL)

The surface of a wormhole looks like a fun house mirror although no two surfaces are alike in term of appearance space travellers without an updated map often got lost whilst entering the wormhole. A wormhole lasts billions of years before shrinking into nothing, no signs of technology around wormhole meaning these wormholes are self-subsistence.

How can we improve the existing space traffic system to allow space travellers to easily identify the correct wormhole that leads to their destination?

You can use the signs, but only in fun setup: 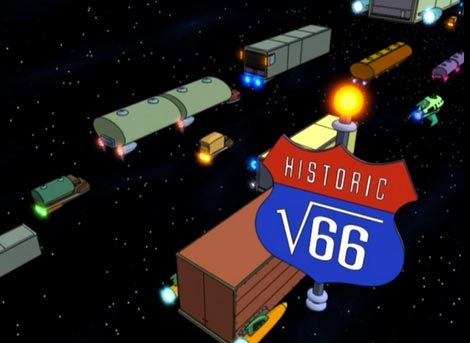 Because, if we are in year 2615 and can create wormholes, it is safe to assume that we can:

Of course that you can provide road signs into space. As you can see from the picture above, Futurama did it (and the series is set in year 3000), so why couldn't you?

But if you do it, for most sci-fi geeks it will become laughable idea. So create story accordingly

Do you need road signs, or do you need a way to update maps? I wouldn't think that people fly using visual flight rules ...

Put a station/satellite/beacon near the wormhole to handle that communication, or perhaps three or four on all sides.

Actual Road signs in space seem a bit silly because you could approach the worm-hole from any direction in 3-dimensional space, and are not being channelled along a 1 dimensional road.

Perhaps there could be a navigation beacon near the worm hole that transmits traffic orders to nearby spaceships, similar to an aircraft control tower. Presumable radio signals travel through the worm hole? So you only need one one one side.

Maybe you need a radar detector on both sides so that traffic control can be transmitted a clear view of both sides.

Putting beacon satellites next to the important wormholes (the ones that allow for the shortest travel times to destination planets and space stations) seems like the simplest solution and can obviously be paid for by advertising, pointing out the businesses at the other end of that wormhole.

They are however vulnerable to foul play. What if for example some nefarious agenst of "Burger Hegemon" drags the beacon from "Tacozoid Bell" over to another wormhole that leads to a black hole?

A more universal system might be that important destinations and transit areas send out very strong, encrypted signals. These pass through any nearby wormholes and come out the other side. Ships would identify wormholes by the signals coming out, using the strength of the signal to determine to which destination a wormhole leads and how far it is from the wormhole exit to the destination beacon.

A signal might even pass through more than one wormhole if it's very strong or benefits from some unknown physics, allowing the ships to see more than one jump ahead to find their route.

Alice wants to travel from Earth to the trading post around Alpha Centauri B. She tells the computer to scan for the unique code belonging to the trading post and gets three results, the strongest one appearing to come from a wormhole near Jupiter. After verifying the code against the public key in the ship's database and determining it's authentic, she sets course for Jupiter and enters the wormhole.

Not having used this particular wormhole, Alice is quite surprised when she emerges from the wormhole in deep interstellar space, more than 200 lightyears from the Solar System or Alpha Centauri. Flying around in a quick circle of the wormhole, she discovers there's a second wormhole only 0.3 AU away that transmits the trading posts signal loud and clear. After the second jump, Alice has arrived at only a few thousand kilometers from the space station. Saving her several days of flying compared to the single jump from Pluto orbit she used to take.

One way would be to have beacons. The id. of a wormhole appears on the screen as text when a beacon is located or within range.

Not the answer you're looking for? Browse other questions tagged technology space-colonization wormholes space-exploration or ask your own question.

2
Creating wormholes that aren't magic
5
space-born ship-to-ship combat 150 years from now w fission/fusion tech
7
Too close for comfort
1
What could lead to the appearance of a wormhole relatively close to our planet?
14
Could you carry a wormhole through another wormhole?
9
Does crossing a wormhole happen instantaneously, or with the course of time?
1
What resources would space traders trade, assuming a gate network but no other FTL exists?
10
How would you arrange wormholes throughout the galaxy so that they don't violate the Chronology protection conjecture?
3
Calculating near future spaceship rocket delta V in a vacuum