Why would murids (such as rats and mice) be sacred animals?

In a future web-series I want to create, there is a species of massive humanoids named giants (Homo gigas) (technically, there are still humans, just not Homo sapiens). They are less social than anatomically modern humans, they are as solitary as orangutans (meaning they are often alone, but they can be genuine friends, and even romantic partners with each other, and they almost never kill each other). Giants are also omnivores with herbivorous tendencies like gorillas and squirrels, instead of being true omnivores like bonobos and catfish. Adult giants are as massive as polar bears, and, like lobsters, crocodiles, and kangaroos, are adolescents (or teenagers, if you want) all their lives, in the sense that they never stop growing. If we compare them to anatomically modern humans, in terms of both interpersonal and linguistic intelligences, they are mildly mentally disabled, but in terms of both intrapersonal and naturalistic intelligences, they are geniuses. Finally, they are much more likely to be autistic and slightly more likely to be empaths, and much less likely to be sociopaths than anatomically modern humans.

But, they still have a culture. Their main religion worships the following animals: great white sharks, ostriches, dogs (including dingoes, wolves, coyotes, and jackals), horses, pigs (including wild boars), bovines, murids (all the three main rat species: black, brown, and Polynesian, and house mice), and nonhuman apes (all members of the gibbon family, orangutans, gorillas, and both chimpanzee species). Consuming these animals (like eating the fat, drinking the blood, and smoking the hair or the feathers or the scales) equals sacrilege. Their religion is polytheistic with eight main deities (or gods and goddesses if you want) who look like hybrids between humans and their sacred animals, and they have twenty-four minor deities who look more like nonanimal organisms.

In real life, many humans are afraid of murids, because they transmit deadly infectious diseases to them, including plague, tuberculosis (which is technically a disease that originated in humans, but humans transmitted it to other primates, rodents, and many other mammals), and hantavirus-related hemorrhagic fever. Also, because of that, there are many religions that consider rodents unclean animals (like both Judaism and Islam prohibit the consummation of any rodent meat, and some Christian denominations like the Church of Latter Day Saints).

The only real life religion I know that consider murids (or at the very least only rats) sacred animals is Hinduism (there is a famous temple in India where we can find thousands of rats, and we must not voluntarily kill them).

So, I wonder why would murids like both house mice and brown rats be sacred animals.

Ask different cultures, you get a different picture from what Europeans and Americans think.

Chinese might tell you that rats are signs of wisdom, wealth, and prosperity, that the year of the Rat brings very healthy children... but it also has a low connotation too, standing in for criminals, yet the proverbial rat is also the smartest of all animals as it cheated in the race for the zodiac spot by hitching a ride... And it was a rat of all beings that resulted in the sky and ground becoming separated in the first place.

In India there is already a temple to them: Karni Mata temple is also known to feed rats because Karni Mata reincarnates through them, and feeding them gives luck and prosperity.

Just give your culture any reasons to venerate rats: connotate them with prosperity (they only come when you are rich), or with fertility (they reproduce a lot), health (ever seen an ill rat?), or make them the messenger/tool of a rather vengeful deity and feeding them is meant to keep the wrath in the shape of illness and hunger away.

There is nothing off with worshiping a mouse. Egyptians worshiped dung beetles and jackals, which in terms of cleanliness are not exactly first in class: one rolls dung balls, the other feasts on corpses.

If Egyptian religion did, same can do also their religion. Remember that a religion attempts to be internally coherent, not absolutely coherent. 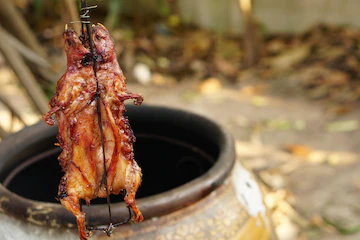 Like we all learnt in school ACYR. Always. Cook. Your. Rats.

The problem with rats is they (a) carry disease and (b) contaminate food stores. Humans respond by (a) not eating uncooked rats (b) killing rats near their settlements.

Giants cannot eat rats because, to quote my earlier answer about sharks:

Homo Sapiens solved this problem using fire to cook meat and kill the parasites. They first invented fire to keep warm and later realized it is good for cooking.

Homo Gigas never invented fire because their large bodies make them better at dealing with the cold. They soak up more heat during the day and retain it better at night due to their lower surface areas.

Giants are nomadic browsers like gorillas and have no settlements and no food stores to contaminate. There is no need for them to hunt and kill the rats. They only need remember not to touch or eat them. This is where the religion comes from:

Giants do not understand how parasites work but they know eating these animals is bad. The story of never eat a rat was passed down the generations until it took the most easily rememberable form. That form was rats are sacred. Don't eat them.

Among Germanic tribes the goddess of fortune appeared as a white mouse1. The Slavs and Romans considered it a good omen, while in Japan to-day it is the symbol of Daikoku, the god of wealth.

About 1,400 years before Christ, Teucer2 and his followers landed upon the shore of Asia Minor just below the Dardanelles for the purpose of colonization. Tradition has it that before these Cretans3 set out from their home land they had been given an oracle commanding them that where they settled there they should build a temple to Apollo, in which shrine they should worship the "earth-born creatures." 4 [...] For a long time the invading Teucri were restrictedto the shore by the aboriginal Pontians, with whom they continuously contestedin arms. A decisive victory for the Cretans was accredited to the mice which their Apollo caused to gnaw the leather from the shields of the enemy during the night preceding the final battle. After conquering Pontus the colonists toiled many days to erect by the winding brook Scamander the high-walled Pride of Priam. Nor did the Trojans forget in their prosperity the humble source of their salvation,but in gratitude they constructed upon the adjacent Isle of Tenedos their first temple to Apollo, a Smintheon5, where mice were sacrosanct.

Several Greek and Roman historians visited the Troad temples and described in detail a marble sanctuary teeming with gray mice raised at public expense. More holy than all the rest were a family of white ones having their nest under the altar itself. Coins of the Troad frequently bear representations of the archaic cultus statue of Apollo Smintheus and occasionally a sacred mouse.

The sacred white mice of Pontus are mentioned in the writings of Aristotle, Strabo, Aelian and Suida. [...] So strong became the cult of the mouse god that centers of worship were located at Chryse, Killa, and Tenedos, Alexandria, Hamaxitos, Larissaia, Parion, Arisba, Methymna and Magnesia.

1) Germanic goddess of fortune: I have no idea what the author is speaking about.

2) Teucer: That's Teucer son of Scamander, not Teucer son of Telamon. The region where they landed is the Troad, famous for its capital city, Troy or Ilium. One of the many variants of the myths associated with the foundation of Troy is that Teucer's daughter Batea married Dardanus, after whom the Trojans are called Dardanians by Homer, and who have his name to to the strait of the Dardanelles. Dardanus and Batea had a son named Erichthonius, who had a son named Tros, who founded the kingdom of Troy, and whose son Ilus (great-great-grandson of Teucer) founded the famous city.

3) Cretans: So says Virgil in the Aeneid. On the other hand, Dionysius of Halicarnassus says he and his men had come from Attica.

4) Strabo says the prophecy was that they were to settle where where the earth-born will attack them at night; which was fulfilled by the vast number of mice which gave great bother during the first night ashore.

5) Apollo Smintheus: Sminthian Apollo, Apollo the Mouse-Killer. The Greek word sminthos means mouse or vole; it is not inherited from Proto-Indo-European, meaning that the Greek language must have acquired it either from the mysterious pre-Greek substrate or from an Anatolian language; the second option would fit with the myth.

Society dies. Someone discovers Disney World and assumes that it is the religion of the ancients. Mouse worship returns. 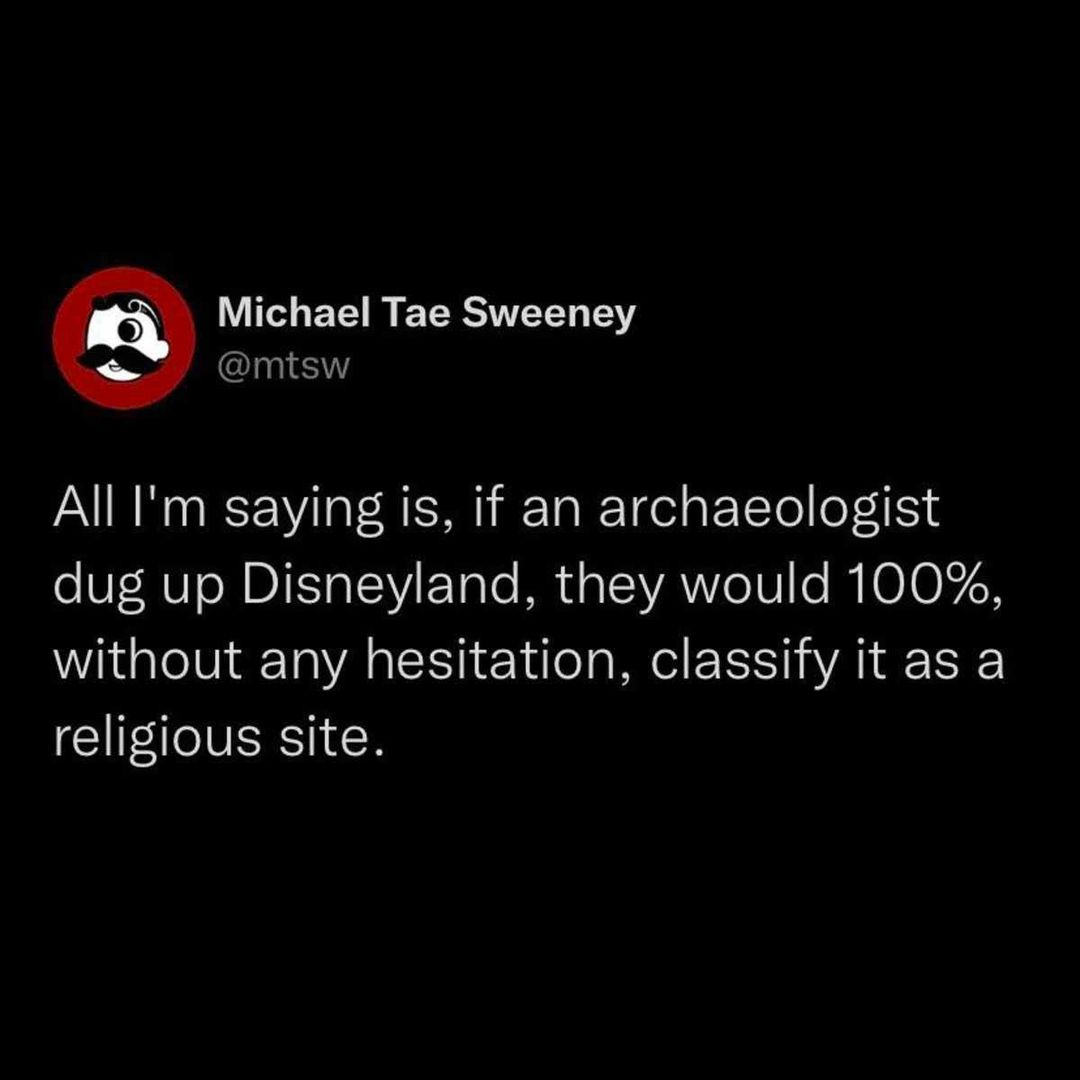 Because of an infection with a microscopic parasite.

This parasite is transmitted through the feces of murids and when it infects H. Gigas it alters their behavior so that they revere the mice, and protect them from potential harm. Infection is endemic in most H. Gigas populations.

If the giants coexist with "normal" humans, or have coexisted in the past, the presence of rats in an area could make that area far more favorable to the giants. Rats are seriously destructive to the food storage involved in normal human agriculture, and if your herbaceously-leaning giants do not practice agriculture in this sense (being nomadic foragers, or having farming but preferring to eat their food directly off the plant) then rats will be far more destructive to the normal humans.

Not the answer you're looking for? Browse other questions tagged culture fauna religion social-norms anthropology .

6
Why would great white sharks be sacred animals?

3
How do Rats and Mice see the world?
11
Intelligent Animals Integrating into (Western) Human Society
2
The Domesticated Elephant
3
How would the removal of humans change the wildlife?
5
A world of animals and cannibalism, is it plausible?
3
How to translate various human cultures into animal cultures?
3
How would an environmentalist society deal with pests?
6
Why would great white sharks be sacred animals?
6
Why would neurodivergent people be sacred individuals?