How can being like Superman travel the world with his normal partner and to get to destination in the shortest possible time?

Let's say, there is a superhero with the powers like Superman(or Omni Man from the Invincible). How would he travel the world with his partner, for example from New York to Paris in the shortest possible time without injuring his partner? Would the partner piggyback ride him or he would carry him/her in his hands? Also, take into consideration how would normal body take the pressure when traveling at high speed, temperature, etc... Thank you for your answers in advance.

"Realistically", he would probably have to put them in an environmentally controlled container and carry that, taking care not to apply too high accellerations.

If he carries them openly, they will suffocate, freeze, or get shredded by the airstream. Unless they go much slower than conventional airtravel. 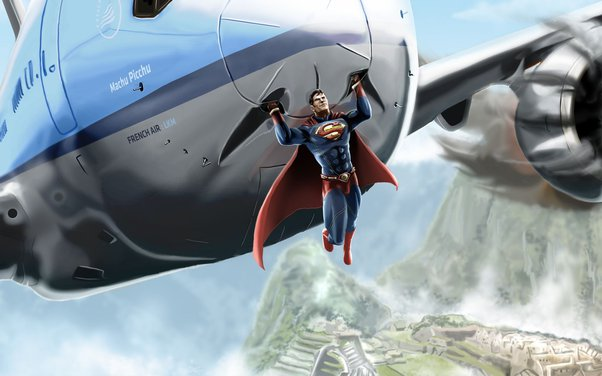 You must put Louis Lane in an airtight pressure-controlled container. These already exist. They are called airplanes.

Put your darling inside an airplane. Pick up the plane and fly to wherever you are going. I suggest a small plane that is (a) propeller powered so there is not jetstream and (b) reinforced with girders on the wings so it can withstand greater speed than the engines could ever give out.

Traveling at any speed above ca. 80 km/h requires protective clothing or cabins, since the airflow across a normally clothed body would cool the passenger too much to be comfortable and could kill the passenger at higher speeds. Airflow can also make it difficult to breathe - the generated wind will literally take your breath away. Both problems become greater if traveling at altitude where the air is thinner and colder. In older Superman comics he habitually wraps anybody he carries in his invincible cape, which might solve the cold problem, but not the breathing problem.

Using an airtight container would do away with both problems, at least for quick trips. For longer trips, the container would require an air supply and some insulation against cold. A molded or soft seat or couch would also be required for comfortable trips.

Given such a container, acceleration would be the limiting factor. People in general are only able to withstand a few gees for extended periods of time, and then only in specially designed seats. Accelerating at 1 gee (to which we have to add the planet's gravitation to measure discomfort) half the way and decelerating the other half, you can get anywhere in the world in 50 minutes. If you want to do it faster, you can pile on more gees, which can become pretty uncomfortable.

"Lois" just buys a piloting license. But instead of tanking fuel and running the motor all the time, she'll start the engine only for launch and landing, and during the flight, "Clark" will take over and carry the specialty reinforced cabin from a pair of handles at the maximum airspeed the plane should be possible on its own.

Besides having a suspiciously low fuel bill, nobody will be the wiser ever. And even the kerosene bill can be fixed by paying the fuel guy to put the rest of the fuel that should have been used into the tanks of other planes.

"Clark" is a superhuman and fights together with others. One of those surely is a magic/science wielder that can offer direct place to place teleportation. And if that guy belongs to the other side: Punch them a few times, then forgive them - but also take their device.

14
Is it possible to make a logically consistent set of laws that produces physics similar to that in superhero comics?
6
Manhattan-sized asteroid, sitting on the ground?
5
What sort of claws would be best utilized for melee combat and quickly scaling the walls of a modern day building?
12
What would be an actual real life mechanisms of an accelerated healing factor?
32
Why would a healing factor superhero still be afraid of things?
40
Scientific/biological basis of someone with unlimited willpower?
6
How would people in the 1920s-1930s explain or rationalize superpowers?
23
What laws, if any, would have to change to allow people with superpowers to use their powers for profit in companies/businesses?
6
How durable would a kaiju-sized human be?