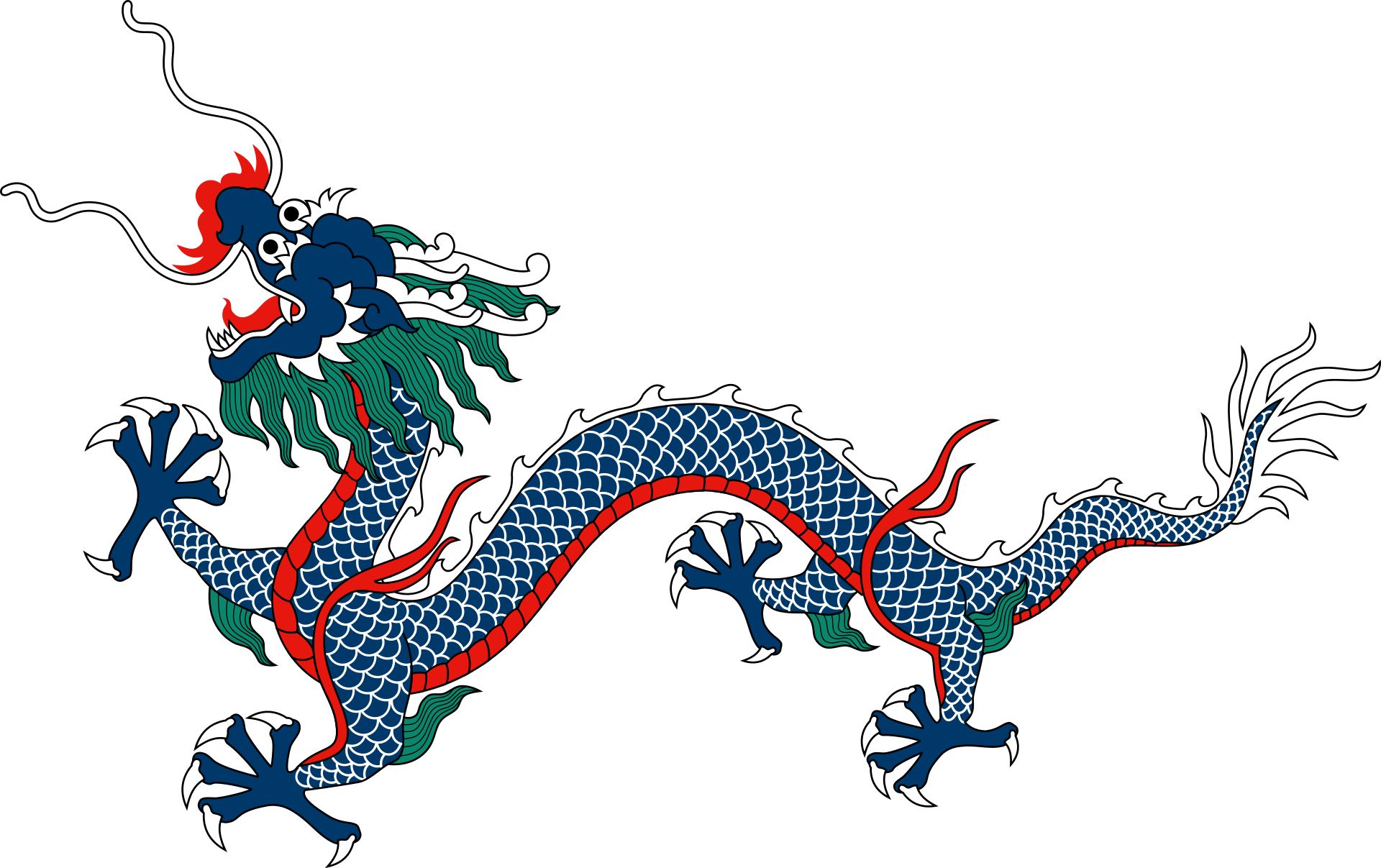 In the culture of China and other East Asian countries, dragons are legendary creatures that resemble snakes with 4 legs. They are big and strong creatures that can somehow influence the weather and cause rainfalls, typhoons, and floods. Unlike European Dragons, Asian Dragons don't always fly or breathe fire.

Which real life animal would be closest to a huge lizard that can control the weather?

They are related to Komodo Dragons

But for the horns, weather control, and flying, these are very close to being oversized Komodo Dragons (like the one above) with lots of frills added. In fact, our hypothetical Long/Lung will likely be closely related to them, probably their precursor or a side branch.

Horns and frills as well as the mane mainly serve mating purposes, the latter being made up very close to how Jurassic Park depicts Dilophosaurus - with neck frills that can be stood up with a few muscles to communicate.

Did you know that Komodo Dragons can run up to 20 miles per hour and are very adept climbers? People might see the dragon on a rock, turn around and next, they see it on a tree, not spotting it making the way there in a spurt. But it ends up there. So it must have flown, yes? Well, actually it ran, but who is to blame the peasant that had better things to do like putting down rice plants?

They are not magical, they can read the weather

They don't influence the weather, they are highly intelligent and know all about the weather for up to a week - their whole body is pretty much a gigantic weather station. They read the position of the sun with their skin, taste the air currents with their Jacobson’s Organ, hear the air pressure changing with their ears, and listen to the vibrations of the earth for miles with their belly. As a result, they can predict the weather for up to a week in their local area very precisely. If the rain upstream of their dwelling is not coming down, their behavior makes people think that they withhold the water from the stream, despite them just adapting to the lower tide and vice versa.

As a side effect, a normal Komodo Dragon tastes carrion over up to 6 miles - a Long would be able to taste a battlefield over dozens, if not hundreds of miles and thus appear to be all-knowing. The Battle of Red Cliffs, which reportedly saw between 270 k and 850k participants and several hundredthousand dead (Depending if you believe Zhou Yu or Cao Cao), might even have been tasteable at the Yangtze delta downriver... 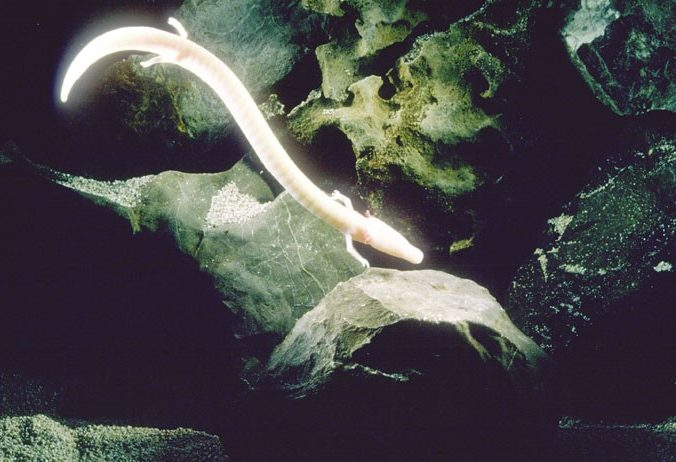 Your dragon bears a resemblence to the Olm. Long snakey body, hairless with itty bitty legs. The olm is a type of blind cave salamander that lives underwater. Master of the Sea and Sky indeed!

Another similarity is dragons and Olms are both extraordinarily long lived. An olm might live 100 years.

Here they are side-by-side. 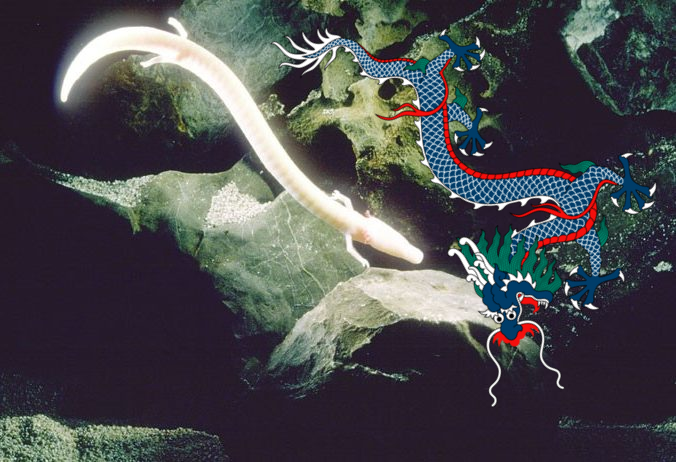 The two are almost brothers I reckon. 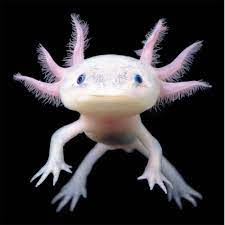 A slightly better fit in the salamander family may be the Axolotl. Unlike other salamanders they have long ornate gills that resemble the frills of an Asian Dragon. They also have certain abilities to get the rumors going about their mystical prowess like their ability to regenerate significant parts of their bodies including arms, legs, eyes, and internal organs. While this is not whether control. Once you attribute one magical characteristic to an elusive and poorly understood animal, it's easy to start seeing other magical properties made up about them.

If an offshoot of the axolotl were to evolve to the same size as some of the giant salamanders of southern China, they could reach sizes in excess of 6 ft. very much giving you a strong basis for your Dragon mythos.

What are we looking at?

These dragons have had a lot of forms throughout the ages, but the current understanding would be something like this:

As you can see, this is mostly a mammalian creature. So, let's say it's a mammal, and we'll see where we can get

Horns are a relatively common feature, both in and out of mammals. They usually evolve to aid in fighting, so a similar origin could occur here. For antlers, a structure like in some extinct giraffids would be quite reasonable

True barbels are not needed in mammals, as they have a tongue instead. But, a barbel-like extension of the nose could be useful in display. This can also extend to the mane, and even to the horns if you'd like

Mammals usually do not have scales. However, there are a few species with this feature, such as the rat kangaroo and anomalures. Also, the pangolins have scales derived from the fur. Either method could result in a scaly hide

The serpentine body seems like more of an issue, but it has a simple answer: Like the weasel, the ancestors of these dragons adapted a narrow form for creeping through tunnels. This anatomy could be retained to the larger form of current dragons

The tail is more of an issue, as most mammals have a small, narrow tail. However many species, such as the pangolin, do have a wider tail like a dragon

Finally, the talons. While these are an obvious adaptation for a grasping animal, there needs to be a reason for it to grasp. One idea could be that this is an arboreal animal. This also somewhat fits with its descriptions of living in the air

Prehistoric sea reptiles like Nothosaurus reached a length of up to 25 feet and had arms, legs, and a long neck.