Where would pirates go to operate?

In my world, there are pirates who steal and raid. They are not just the stereotypical kind with parrots, but also other kinds like the ones in Somalia or Barbary pirates. When trying to implement them, I thought about where could they be found, but with no solution. Even in a far away place, like a colony, they may not want to be very close due to police/soldiers, or they see no value in it. If there were pirates in a world, especially in a geographical sense, what would be a practical region to commit piracy and operate from?

Geographical Areas that could possible work (You can also suggest what would be a good area, or details):

Extra Information to help: The magic system is energy-based, and can help speed up medium to small boats. In addition, the technological state is late 17th century, early to mid 18th century.

Anywhere With A Friendly Harbor:

Inevitably, there will be a place that either encourages the pirates to attack enemies, permits pirates and has "neutrality" to take advantage of their wealth, or is actively ruled by pirates to guarantee a safe harbor.

Pirates need a legitimizing force, so many were privateers. They operated under the aegis of a state and were essentially pirates against a particular nation. In this case, they typically operated out of the ports of the legitimizing state. Division among governments, lack of communication, religious differences (like with the Barbary pirates) or just greed make many nations look a blind eye to piracy as long as the profits were spread around.

Lacking legitimacy, the pirates needed a place to supply, somewhere to spend their loot, and a means of selling their loot to legitimate buyers so they could make money (and possibly build a reputation as "merchants" to give them somewhere to retire to). Small nations or island-states could make deals with pirates, who could help guarantee their safety from enemies in exchange for port access. These cities could also be legitimately afraid of being attacked by the pirates if they didn't cooperate.

These small states would profit from the gambling, drinking, and prostitution supported by fleecing the pirates for all they were worth. Unscrupulous merchants needed a semi-legitimate reason to stop at these ports so they could buy the pilfered goods at a discount and resell those goods to destinations willing to overlook the potential seedy origins in exchange for cheap goods.

Then they need to be a workable distance from trade routes and towns they could attack. Too close, and they invite counter-attack. Too far, and they waste their time going back and forth traveling. So Madagascar, for example, was a pirate haven for raiding the Indian Ocean. The locals were unmolested by the pirates, who needed their cooperation. It was also part-way to Europe and the Americas, so merchants could buy the goods and ship them on to places that weren't too picky about where they got things.

Temporary bases close to targets could allow pirates to at least get some goods (like food, water, and/or wood) while raiding, but also be temporary enough that the authorities didn't know where the pirates were. Then they could travel back home (far from where they were pirating) and enjoy the fruits of their work without having their actions associated with piracy.

And finally, the pirates can pretend to be legitimate ships with legitimate aims. Maybe they even are! A merchant ship with an unscrupulous captain might ship goods when there are goods to ship, but raid when they think they can get away with it. Many navies underpaid their crews and captains, so a war ship might conduct attacks (especially on hostile or at least neutral) shipping with little risk of getting in trouble - after all, THEY might be the ones dispatched to hunt for the pirates.

They live by the water. 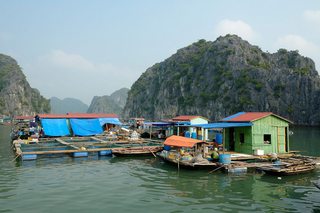 These pirates are not Captain Jack Sparrows. They are Captain Owns One Pair of Pants. And those pants are well on the way to becoming shorts. These pirates are poor people who fish, do dock labor or otherwise make their living in and on the ocean. What they lack in glamourousness and panache they make up for in hunger and desperation.

Someone like an organized crime boss or someone on the inside of a shipping syndicate learns of a target. That person rounds up some of these folks who are desperate enough to risk their lives in a piratical venture in exchange for pay. If one dies, his family gets the pay. These folks go out and rob the ship.

The pirates wear masks. It is hard to later identify a guy in raggedy pants because that is what everyone is wearing. The pirates go home afterwards and hide their pay. The career criminal takes the loot back to their base in town.

The most successful pirates had whole societies behind them and were basically any place in antiquity that had good vessels and unemployed warriors in need of plunder.

So Vikings, Greeks, Irish, Chinese, Japanese, Africans, pretty much anywhere. They do their business then go home and look after their kids like everyone else.

One pirate lady Zheng had 100's of ships and up to 80,000 men and pretty much did whatever she wanted until the Chinese basically bribed her with an official position.

Grace O'Malley the Irish pirate had her own castle on the Irish coast and the support of her clan.

Koxinga had the remnants of an army and used it to take Taiwan from the Dutch and pirate everything in sight.

So pretty much anywhere defensible is a good pirate base. Or if you have the men and the ships, just find a good harbour and take it over.

Not the answer you're looking for? Browse other questions tagged geography crime strategy colonies piracy .

15
How could trading posts be defended against pirates?
12
What determines where a desert is?
3
Where would deserts form on this world?
5
Where is the safest place to build a colony on the Moon?
13
Where to Keep Your Dinosaur?
7
How can a coven of crones operate in anonymity?
4
Where else would mountains be on this continent?
29
How would criminals be punished in a world where everyone can teleport?
14
How to stop space pirates from stealing goods using a teleporter, without breaking the bank?
21
The deaf prisoner got her secret message and the pirates never knew. How was that possible?