I'm seeking a hard science setting for a piece of xenofiction with a decidedly non-sciencey feel. That said, there is no magic or magic technology.

The idea is as follows:

This civilisation would be very alone in the universe at the end of the stellar phase of the universes evolution, with perhaps only a few other blue dwarf stars visible in the night sky, if any. All the other stars have turned into black dwarfs.

Obviously the timescales are immense so my question is this:
Is the notion of a planetary thawing of a truly ancient rocky ice planet some 6 trillion years after its formation is within the realms of plausibility.

Yes, it is plausible as the timescales of which a red dwarf is a blue dwarf are quite big, to the point where if your icy planet is distant enough it will thaw and potentially develop life. What matters is the placement of your planet and its size, as if your icy planet is too small it won't retain a atmosphere and if it's too far the temperature increase will only make the planet only go from Triton cold to Europa cold. There are exoplanets with substantial amounts of water whose origin comes from a icy planet that migrated inwards. They are worlds with world spanning oceans and very thick atmospheres of vapor. Your world, being a world that thawed will get its atmosphere from when its icy surface slowly melts away. Since water vapor is lighter than nitrogen, your world is likely going to be bigger than earth to retain its atmosphere.

The biggest concern for your world I see comes from geology, as with such a ancient planet the geological processes within the world likely have died down after trillions of years. This may actually inhibit life because of the role geological activity on earth played in the origin of life, and may play on other worlds like Europa if there is hydrothermal vents on Europa. You likely could circumvent this issue by having life actually form extremely early on in the red dwarf's life when your world is geologically active, but be frozen or evolutionarily static for trillions of years due to having no incentive to evolve. (This does happen on earth in certain instances, such as with the Coelacanth who were thought extinct yet still are around, in a much simpler, far less biodiverse ecosystem, life not advancing beyond simple organisms like bacteriums for trillions of years may actually be possible). Your life is likely to be radiation resistant, because being around a red dwarf exposure to higher radiation levels is a given. This is good news for your life as a ancient world trillions of years in age is going to be geologically dead no matter what the size of your planet. One possible way to circumvent this is by having your world part of a binary planet system (and therefore gets geological activity from tidal stress, a process that is seen around pluto).

A civilization may well develop, they have the time and evolution being the fickle and semi-chaotic thing it is on a world with rocky landmasses mixed with water has the potential for intelligent life to develop. However, if they are a space faring society they'll be going a very different tech path than on earth to get there because they'd lack access to fire due to a water vapor atmosphere and without geological activity they'd also lack access to any form of volcanic metallurgy. You should consider inventing creatures that can circumvent this issue somehow, perhaps through intense body heat. They may take far longer to develop a space faring civilization than per se, a world like earth might, but since they have hundreds of billions of years they have more than enough time to figure things out.

Yes, it can happen.

For this to be possible, you first have to put the planet far enough away that it can become totally icy. Then, after the temperature rises as the red dwarf transitions into a blue dwarf, the habitable zone must encompass the planet's orbit, melting the ice and making it a better place for life. We can easily calculate whether or not the final habitable zone can ever extend far enough for this to be possible. 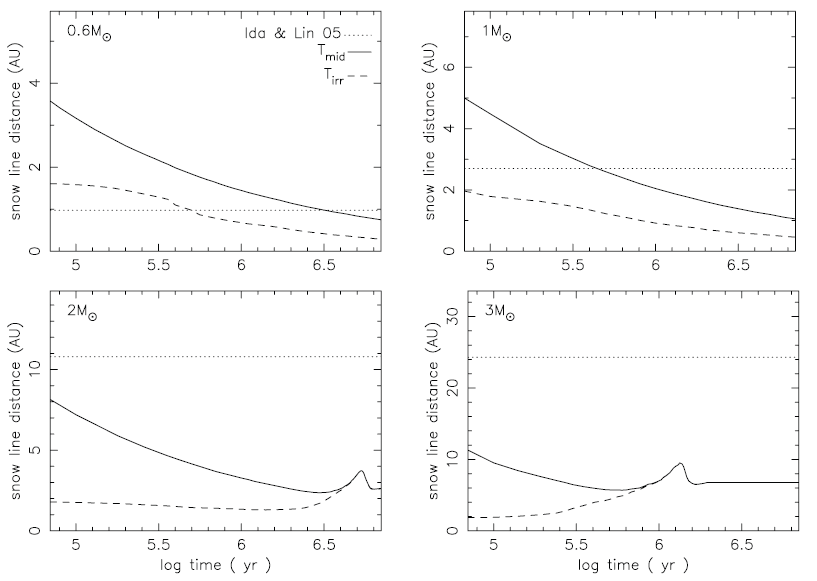 For lack of more information, though, I'm going to have to stick to the original estimate.

Your article states that the initial surface temperature of the star is ~2230 K, prior to entering the blue dwarf phase. It then rises to ~5810 K, a change of a factor of about 2.5 The luminosity of a blackbody is proportional to its temperature to the fourth power (see the Stefan-Boltzmann law), so the inner and outer radii of the habitable zone are proportional to the temperature squared. This means that the final outer edge will be ~6 times as far out as it originally was - way beyond the initial frost line, about three times as far out.

This seems pretty good, but what about the inner edge of the final habitable zone. Where will that be? According to the same site that provided the formula for the outer edge, the inner edge will be $$r_i=\sqrt{\frac{L_*}{1.1}}\text{ AU}\approx0.70r_0$$ This is about twice as far out as the frost line originally was.

So, yes, from at least these estimates, the scenario is quite plausible.

1 Some results state that the habitable zone should be even smaller, although others disagree and say that it should be bigger.
2 Even more drastic changes are shown in Martin & Livio (2012).

You've got a problem here:

The radioactive materials that keep the planet's core hot will be virtually gone by the time your planet warms. With no molten core you will have no plate tectonics and thus there will be no vulcanism or uplift. The result is your planet erodes.

By the time you're trying to make it habitable you'll have a world of constant depth oceans.

As noted by others, such an old planet is possible, but has its problems.

The "dead" geology of the planet is the primary problem, and needs some kind of external energy injection to either maintain geologic activity for such a lengthy time or to jump start the processes once again (planetary viagra?).

I think the deal breaker is that after trillions of years your planet would be colder than liquid nitrogen all the way through to the core. The heat from the star would have to be very hot to warm up the surface of the planet to a comfortable level, but step out of the shade and you are likely to get a nasty burn. At night the ground would freeze and surface temperatures would plummet. Even with a thick atmosphere to help buffer the heat from the star, as soon as night falls the air would start to condense and freeze out of the sky. A few billion years increased heat from the star would not be enough to warm up the interior of the planet enough to buffer the thermal gradients on the surface. Basically, I think the the habitable zone will be too narrow in a scenario like this.

... Maybe if the planet rotated very fast it might be enough to smooth out the temperature changes.

Given the difficulties of keeping the core of any world warm on the timescale of stellar evolution with radioisotopes are pretty well insurmountable so instead of a planet orbiting a red dwarf I would suggest a world near the barycentre of a system like Luyten 726-8 a binary red dwarf. This would have a number of advantages, such a world is illuminated by two blue dwarfs thus having a better heat budget but more importantly the gravitational flexion it will experience under the influence of two such stars will keep the world warm at it's core and allow tectonics etc... to proceed under the ice, keeping life ticking over ready for the big thaw.

Not the answer you're looking for? Browse other questions tagged planets hard-science astronomy stars habitability or ask your own question.

1
What is the maximum distance a planet orbiting the sun could have liquid water on its surface?

13
How can a Type II civilization influence accretion rates from a debris disk to a passing star?
8
Red giant Habitable zone
6
Could life develop in this ternary sytem?
17
Could the Sun be born again?
10
Increased Luminosity in Stars
5
What is the Habitable Zone of a Red Dwarf star?
12
What is the theoretical maximum number of habitable planets in one solar system?
1
In Search of a Super-Bright, Super-Stable Star
10
A Habitable Zone Within a Habitable Zone--Would that Make any Difference?
7
How would I make a natural, long-lived red giant star?