Could a continent walled with mountains be a tropical desert?

Can a triangular continent (sharp part oriented south) the size of Australia and located exactly at the equator be entirely desert if it is surrounded by two mountain ranges (comparable to the Himalayas) extending from its southern edge to its Its northeast and northwest corners due to the rain shadow?

the shape of the continent: 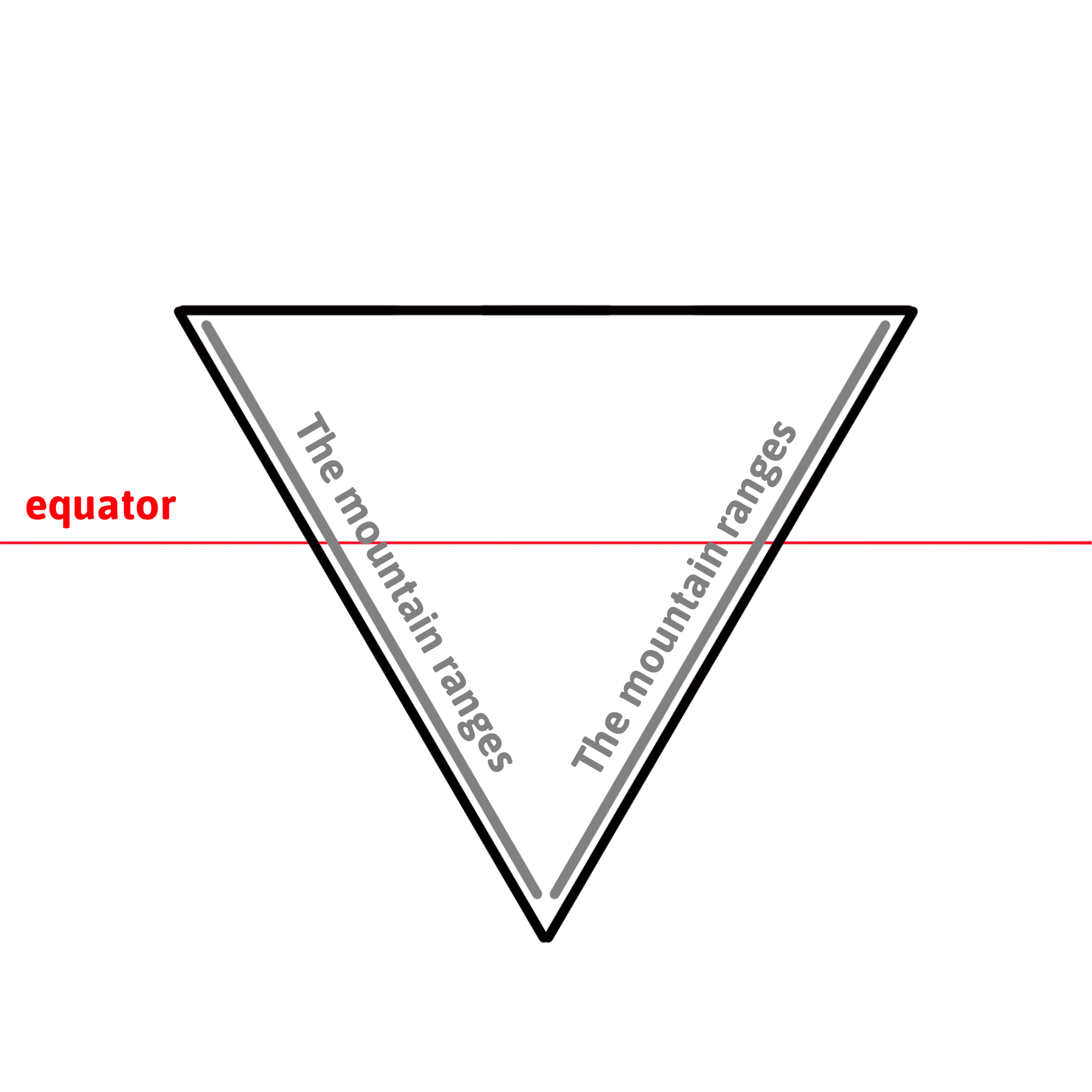 I already know that the equator is often rainforest and very humid, but is it possible for this continent to be a desert? And if it is, what might its climate be?

Assuming that the continent is somewhere on Earth.

First, "rain shadow" has limited applicability so near the equator, because there is very little wind there. Certainly not in the northern part of the continent, which is squarely in the inter-tropical convergence zone.

If the two mountain ranges are comparable to the Himalayas, then (1) they are very very young, and (2) they are hundreds of kilometers across.

Australia has an area of about 7,700,000 km²; the triangular continent being about the size of Australia, this makes the length of each of the three sides about 3,000 km. The continent extends from about 8° northern latitude to about 15° southern latitude.

Kenya is like what you describe but the triangle is rotated. Kenya is right on the equator. The relevant rain shadows are to the north and west.

I put in a topo map of Kenya and rotated my version of your triangle to overly the mountain ranges causing the rain shadow. Then google map of Kenya so you can see the desert.

The Amazon forest is right next to the Andes in South America, and it doesn't look like it has any desert due to rain shadow: the mixing caused by Coriolis force would ensure that some moist air would go past the mountains' shield.

Therefore I doubt that your configuration would achieve the result you hope. It would probably be a tad less rainy, but not completely dry as you would expect from a desert.

Not the answer you're looking for? Browse other questions tagged climate mountains wind .

8
What is the climate of a mountain range at the border of the polar front?
10
What would the weather on this continent be like?
7
How would a 30-kilometer tall mountain on an Earthlike planet look?
3
Weather Impacted By Extreme Magical Effect (Heat)
2
Does my climate map work?
5
How Would I Make an Oceanless World Feasible?
3
Magical Island question part 2: How to add desert to it
4
Would large enough equatorial continent produce a central desert through sheer size?
3
Is my large tropical continent too dry or not dry enough?
3
Could a hot desert plausibly exist in this location?