One of the problems with scaling up creatures without increasing their proportions is that their muscles won't be strong enough to support their weight due to the square-cube law, which I'm sure you're all familiar with. Muscles produce 20-135 (see page 8) or 30-40 newtons per square centimeter, or 4-8 kilograms force per square centimeter (see page 2); this is (unfortunately for worldbuilding purposes) a limit.

One solution is to add more muscles in proportion to body mass. However, I don't like that solution; if I'm making a giant cat, I'd rather have a cat-shaped giant cat and not an elephant-shaped giant cat.

Another solution is to make the creature less dense. However, I don't like that solution either; it doesn't work particularly well when you're working with really giant creatures who'd still be incredibly massive even if filled with helium and structural voids.

I believe my solution is better than those two (of course; it's mine, after all). My solution is to make the muscles themselves stronger, and then to put said super-muscles into super-large-but-still-proportionate creatures in worldbuilding settings so they can exert enough force to function. To explain how I wish to implement this, a brief crash course in how muscles work is necessary.

This is a not-to-scale cross-section of the smallest functional unit of a muscle cell - i.e. the point at which smaller structures are no longer identifiable as being part of a muscle, simply as being proteins.

I would go over the entirety of the process by which a muscle contracts, but much of that'd be irrelevant for the purposes of this question. All you need to know is that:

This process is visualized in a semi-comprehensible and again not-to-scale fashion below: 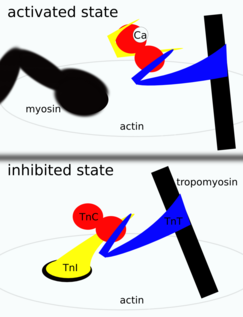 What I wish to do is to attach more myosin heads (the club-shaped or boxing glove-shaped things) to the end of the first myosin head, as well as to add more myosin-to-actin attachment points to the thin filament so that those extra myosin heads have something to stick to. This is visualized in a semi-comprehensible, yet-again not to scale, poorly-Photoshopped fashion below:

Now, of course, the extra force this generates will necessitate mechanically stronger muscles, but I believe spider silk or a similarly strong protein-based material can cover for that, and I've already worked around any heat-generation problems this might cause. I haven't troubleshot the metabolism-related issues (energy, ATP, and oxygen supply to these super-muscles) yet, and those will likely be insurmountable. I also have to deal with the bones of a super-large creature, which is also not quite done yet.

However, I'm not really here to get a solution to those problems; I'm here to ask whether or not something like Image 3 is possible via any means - for instance, and I'm just spitballing here:

The things on this list are just ideas, not questions I'm asking about - I'm aware of the single-question policy - but I'd really like to get more attachment points on these muscles, these might be ways to do that, and throwing my brainstorming at other people might help them come up with a solution.

12
How CAN we scale up living creatures to be giant sized?
4
My creature's cells mix water and some of the stuff in pee to cool themselves. How does it get that stuff to its cells?

35
Why are low gravity humans depicted as TALL?
1
What could a person able to re-arrange their muscle strength accomplish?
15
(Porcu)pine tree needle firing system?
1
Would these structural reinforcements improve dragon wings?
8
Giving dragons more flight muscle
5
Could spasmoneme muscles be useful for a living creature?
4
Increased flexibility for dragons?
12
Limbs where muscle composition is 90% fast-glycolytic and 10% slow-oxidative. Would it be too specialized to be practical?
4
Modifying muscles to be more bullet resistant without affecting strength?
4
How light can a quadruped's legs and relevant muscles be in proportion to their body without losing function?