How much resources would be needed to make significant damage with a chemical laser?

It is the future and some sci-fi technologies are starting to be used, such as lasers. More specifically, chemical lasers.

The thing is that I want to know about nowadays technologies in order to elaborate about the future technologies required to make a powerful and portable chemical laser in the future.

The only thing I could find about was the project Boeing YAL-1 which used Chemical oxygen iodine laser to power a megawatt laser.

However, the project itself was cancelled because the laser wasn't able to reach long distances, in this case, more kilometres than a soldier would even dream to hit with any kind of portable/semi-portable weapon.

What I mean as "portable" and "semi-portable" would be from a rifle with a big gas cylinder (for the chemical reaction), to a 50 mm sized weapon and even a truck sized laser.

What I want to make is simply a chemical laser that would be used against infantry. So it needs to be capable of penetrating at least 10 cm in a human body in pulses (because lasers work better in pulses) that could fit inside a quarter of a second in total. More like the damage a bullet would deal in the same period of time, so it is easier to estipulate things.

What I could imagine is that the chemicals would react in a chamber inside the gun, and the laser would get would through the lens (if I understood the Chemical oxygen iodine laser correctly).

The "artillery size" means something as big as a howitzer, but that would be used against infantry. After all, tanks and some planes use ceramics as structure and shielding. Ironically, it is the best defense against heat and kinect weapons, even though lasers are energy weapons.

How big should the lens be to allow the precision of the laser to reach targets up to 300 yards or more?

Should it be chemical-electric hybrid to allow for better field use? Or it already is, taking into consideration the way it would be activated?

Of course, I'm taking into consideration the Chemical oxygen iodine laser that was used in the Boeing YAL-1, because it is the only example that I could find. I don't know if the gas used has enough energetic density to scale it down.

The main advantage of a chemical laser is that you get the energy you need to excite the lasing atom from the chemical reaction, rather having to have a large external electrical source. When you start to look at megawatt laser systems this translates into having a lighter system. Although that may be changing with new generations of fiber lasers and fiber amplifiers.

A problem with chemical lasers is that the chemicals are very reactive, also you deplete you excited atoms as you are lasing so you want to introduce new excited materials into the cavity very quickly. For example from a SPIE paper

You can see that there is a lot going on from handing the reactive, toxic gasses to "scrubbing" them so they don't exhaust and poison people. Scaling this down so it can be carried by a person is not very feasible, since the power output would also go down, and you really need a lot of power if you want to punch or burn holes into things.

Doing this on a truck scale, or on an airplane is slightly more feasible, but such systems are probably relatively fragile and complex.

The next problem if you can produce the laser light at a wavelength that can go through the atmosphere, is that you need to steer the beam and keep it on target, and that the laser beam diverges the farther away you are on the target, so less energy is available to be on the target. To keep the beam small and "divergence limited" you want to have large optics or mirrors. These can be hard to make for high powers, and if they are large it can be difficult to move them smoothly and rapidly. 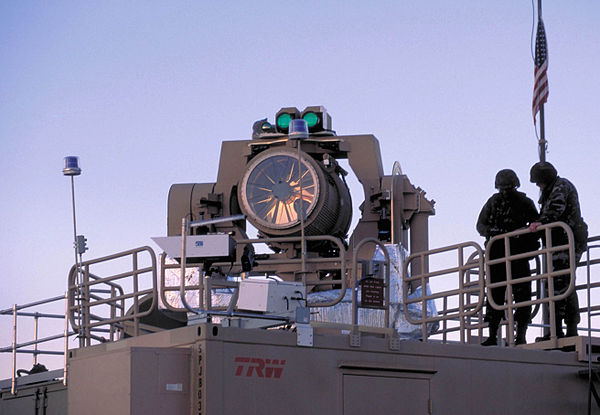 You can see the size of the Tactical High Energy Laser optics and gimble. You can see it also has to have some additional optics to track the target. This type of system used a chemical laser and demonstrated it could hit drones.

Finally how much can you skimp on power? As the beam goes through the atmosphere assuming you can hit the target, you really do need a lot of energy, and it depends a lot on wavelength, pulse duration, and the total amount of material needed to be removed. The turbulence in the atmosphere will also distort the beam and make the power arriving on the spot variable. Also the type of damage you want to have, heating and burning vs vaporizing matters, but generally these types of lasers are essentially heating up the target rather than vaporizing them. So to have that occur relatively quickly you really need to have hundreds of kW.

If you want a 1 MW laser to fit in a rifle and fire for a quarter second, thatâ€™s 0.25MJ of energy. If I am reading your question correctly, what you really wanted to know is how much space that would take up. Gasoline has an energy density of about 34 MJ/L. Not that you could run a chemical laser off gasoline, but if you had a magic â€ślaser super soakerâ€ť, that one liter bottle would get you 136 shots at 100% efficiency ignore pulse/duty-cycle. A large cigar (75 ml volume) with the energy density of gasoline gets you 10 quarter second 1MW shots. Honestly, I wouldnâ€™t feel comfortable carrying around anything like that in my pocket, but thatâ€™s only like the 3 18650 cells in my laptop battery, so I guess it shouldnâ€™t be too terrifying as long as it comes in a nice plastic case and comes from a trustworthy manufacturer.

Pick your wattage and firing time to get your energy demand, pick your fuel (not entirely what the â€śchemicalâ€ť in â€śchemical laserâ€ť is for, but conservation of energy gets you an upper boundary at least) and look up the energy density, and decide how efficient your system should be. if your energy density is actually just specific energy, look up the density and convert. bear in mind energy from your fuel that doesnâ€™t go in to heating up badguys or the air between you and badguys will go into heating up your gun, but that could be interesting depending on your narrative.

As for optics and lens size, youâ€™re going to have to make something up. man-portable quantities of real-world materials will absorb too much heat and explode in your hands, or not focus at those distances.

Not the answer you're looking for? Browse other questions tagged science-based chemistry lasers .

12
Pros and Cons of Laser and Projectile Weaponry
5
What would be easy or difficult to do with the power to directly control light?
6
Stellaser Part I: Trial by stellar Fire or The best design out of three for a solar powered 5 Petawatt laser?
7
Space Combat Depiction 1: Laser Pew-Pew
8
With as much scientific accuracy as possible, how would chemicals injected in one's body be removed?
21
Would laser weapons have significant recoil?
6
Shape of a Large Battle Laser?
4
Is it possible to have a mecha act as a walking particle accelerator?