What kind of creature would be able to provide nutrients to my floating plant mat?

My ocean biome is almost entirely covered by a mat of linked free-floating plants. You can read further details on my original question "What challenges must oceanic plant life overcome in order to create a mat on top of the ocean?". In a nutshell, the main issue was how to deliver sufficient nutrients (mainly phosphorus) to the plants.

The solution lies in a mutualistic relationship between animal and plant. Just have an animal dig up soil from the shore or seabed and deposit it on the roots of the floating plants. The purpose of the behaviour would probably be for nest building. I don't believe that building a nest out of sand on suspended roots would be very practical tough. It seems more logical to build a nest out of the roots themselves, which doesn't help the plant.

Alternatively, it could be the plants that started this partnership. The roots of free-floating plants serve no purpose other than keeping the plant upright. A curved concave root would allow the plant to collect a small amount of particles, which would then evolve to become the substrate on which animals deposit sediment.

So what kind of creature would be best suited for this task? 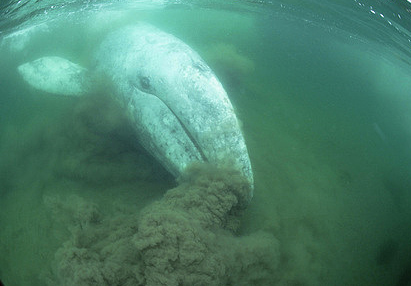 You want the minerals down in the deep sediments. You need something big enough to go down there and get them and then come back up. Lots of things eat mud but these are little filter feeders. Gray whales go down, eat mud and the animals in it, then come back up. An animal like this could move a lot of substrate.

I think though you would be better off going with poop than with nests. Things make a nest only once a reproductive cycle. There is not a lot of material in a nest and a lot of it is eggs or reproductive structures. It is not OK for the animal if the plant eats that stuff!

Contrast that with poop. Animals give their poop freely to anything that wants it. The poop of something like a gray whale will be loaded with nutrients.

Your nest catching structures might hold some nests but mostly they are for catching the billowing clouds of poop coming from animals resting in the plant mat. This will be the gray whale poop but also the poop of everything else and sometimes their dead bodies too. Animals concentrate nutrients and have obligate nutrient losses - all animals. And all animals poop. Poop collection is a catholic and practical way of collecting nutrients.

If there are no other creatures making a nest or living in the roots then there is no competition for space and food, and little danger from predators. That by itself offers whatever creature starts nesting there a huge advantage.

So, it's not so much that an animal needs to do it, but rather that it's an advantageous spot to live if no one else is already doing it.

An aquatic version of a mud dauber would probably be ideal. Mud daubers are wasp-like insects that collect mud and use it to build tube shaped nests. I have to clean these things off of the outer walls of my house from time to time. 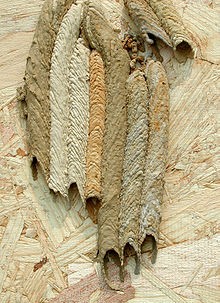 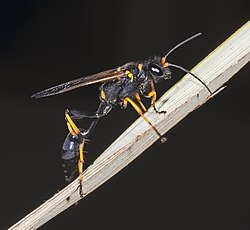 Let the insect build the tube around one of the roots and lay its eggs there. Since it's in the water, maybe it adds some wax to keep the mud from dissolving/washing away.

The larva could be aquatic, and the adults could have the ability to dive under water either temporarily, or permanently with gills. The diving bell spider is a good example of an animal that breaths air but lives mostly under water.

The fact that the creature can fly is a big plus with respect to it bringing mud back from some far away place.

Not the answer you're looking for? Browse other questions tagged biology creature-design behaviour .

17
What challenges must oceanic plant life overcome in order to create a mat on top of the ocean?

4
What modifications are needed for my sea creature to able to hold its breath for weeks?
7
Would a humanoid creature with pointed legs/feet be able to stand, walk/run and maintain balance?
7
Foraging behavior of a forest slime
1
What modifications are needed to have plants that can grow and survive in a world of sugar and sweetness?
5
How large could a hive of giant animals be?
2
What kind of atmosphere is needed for large floating organisms?
10
Roombas scurry in my robot city, what kind of filth would humans be?
17
What challenges must oceanic plant life overcome in order to create a mat on top of the ocean?