Seeing in the Dark - Flashlight Eyes 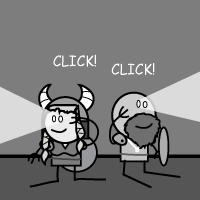 Darkvision, or seeing in the dark. But how does it work? In my world, I've been envisioning darkvision as eyes that emit a color of light that most humanoids can't see. Are there any problems inherent in this?

There are already animals that do what you want, in the sound domain: bats. Let's just steal shamelessly.

More flash for your buck

Constantly producing a distinctive light source bright enough to see by is energetically wasteful, dangerous (eventually at least one predator will figure it out!) and chaotic when multiple of your species are using it at once. Instead, your species has the ability to discharge a very bright, very sudden flash that they alone can see. The most efficient way to do that is to produce a very narrow wavelength, flash a lot of it in a short time, and have a correspondingly narrow sensor, in this case specialised rods in their retinas. Compare with bats, whose ears are specifically shaped to focus the wavelength of their ultrasound. Bats have to deal with the Doppler effect, but you probably don't.

It takes a brief pause for the flash to be repeated, because the flashing organ needs to recharge. This gives darkvision a peculiar quality compared to regular vision, because it lacks the continuity that creates the sense of movement. The effect is akin to stroboscopic disco lights. This also means that they can avoid producing their distinctive light if they're trying to lay low; or they can use it like a morse code to communicate with others of their species.

Blinding yourself with light coming out of your eyeballs

Obvious problem, as pointed out by others. Bats aren't a great help here, because sound is slow enough that they can disengage their ear bones while screaming and re-engage them for the echo - good luck with that at c. But you don't have to filter in the time domain: you can filter in the rotational domain. Your flashing organ produces light that is perfectly polarised. Your wavelength-specific rods are sterically aligned to collect every plane of light except the one you flash out. Light reflected off natural objects is almost always randomised in polarisation, although smooth reflective surfaces will presumably look completely dark at certain angles.

I see one big problem with eyes emitting "darklight" (my shortcut definition for "light that can be seen by species gifted with darkvision"). Or any device emitting darklight. But let me explain it :

Your sight is dependent of others, too

That's functionally the main problem of this approach at darkvision. Regardless of physics or biology, you'll face situations that don't really match your criterias nor the common principle of darkvision like in Dungeons and Dragons.

Indeed, if you emit light and receive the light in return, and others emit light, too, at some point one will interact with each other, often unwillingly. If you're unsure to understand, take two flashlights at night, a buddy and test yourself, keeping the flashlight targetting where you see. Here are some simple nasty consequences you can check out.

What are (some) of the consequences from this?

Eyes are receivers of light. The light is focused on retina where receptors sense the light and send the information to brain through optic nerve.

For dark-vision using UV rays, following things are to be considered:

Some fish have eyes that capture and perceive ultraviolet wavelengths

There is another way of dark vision used by snakes. As told here,

Snakes can 'see' in the dark thanks to protein channels that are activated by heat from the bodies of their prey.

Vipers, pythons and boas have holes on their faces called pit organs, which contain a membrane that can detect infrared radiation from warm bodies up to one meter away. At night, the pit organs allow snakes to 'see' an image of their predator or prey — as an infrared camera does — giving them a unique extra sense.

A quick fix would be to move the light source out of the eyes. That would mean in your image, the light cones would not originate from the eyes. My favorite place would be on the forehead (like the mythical third eye). When that "third eye" is opened the light source in it starts to emit the UV light.

Alternatively, to keep the light source in the eyes: The left eye emits the frequency the right eye can detect and vice versa.

Of course, within the setting of D&D with all its magic, gods and fantastical creatures it would be perfectly fine to assume there are materials available that have optical properties to solve this primary issue.

Just an additional thought: Fog and dust in the air will impair that kind of vision heavily. Just like with a flashlight, nearby fog/dust will reflect the light and outshine light reflected from further away, thereby limiting the visible distance.

The eyes do not emit light. Rows of bioluminescent cells on the back of the eyelids do it instead.

Creatures who use this kind of darkvision usually have a silvery sheen to their corneas. It's hard to spot but doable. Some disguised dark elves were caught this way.

These species control these cells unconsciously. They do not emit "dark light" when the eyes are closed, they turn off then back on fast when they blink, or when there's enough light to see by, (i.e. in broad daylight).

With some training, they can learn how to turn it on and off consciously. It's like wiggling one's ears, some dark elves say. But by learning how to turn it off, they can avoid being seen by other darkvision-enabled creatures.

Many predators in the dark learned that this light means food. Sometimes food that fights back, but that's life in the underworld for you.

In a group, only one of them need to have their eyelids lit. They can also use blink-pattern codes to communicate over long distances.

When in the dark, these cells activate, casting light on the cornea, who reflects the light in a broad cone, allowing vision.

Other animals may be able to see the light 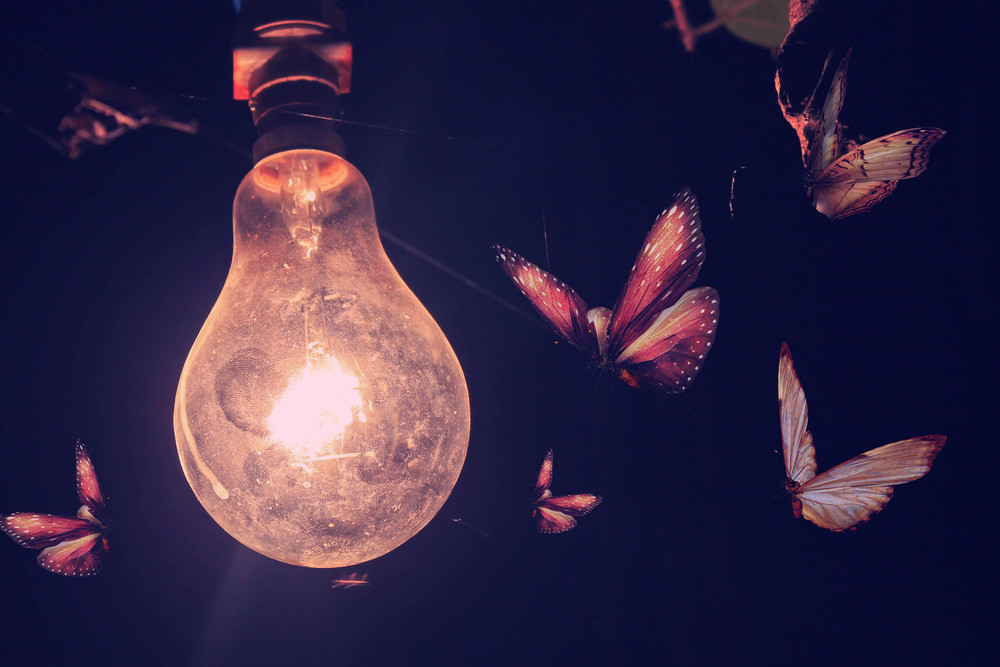 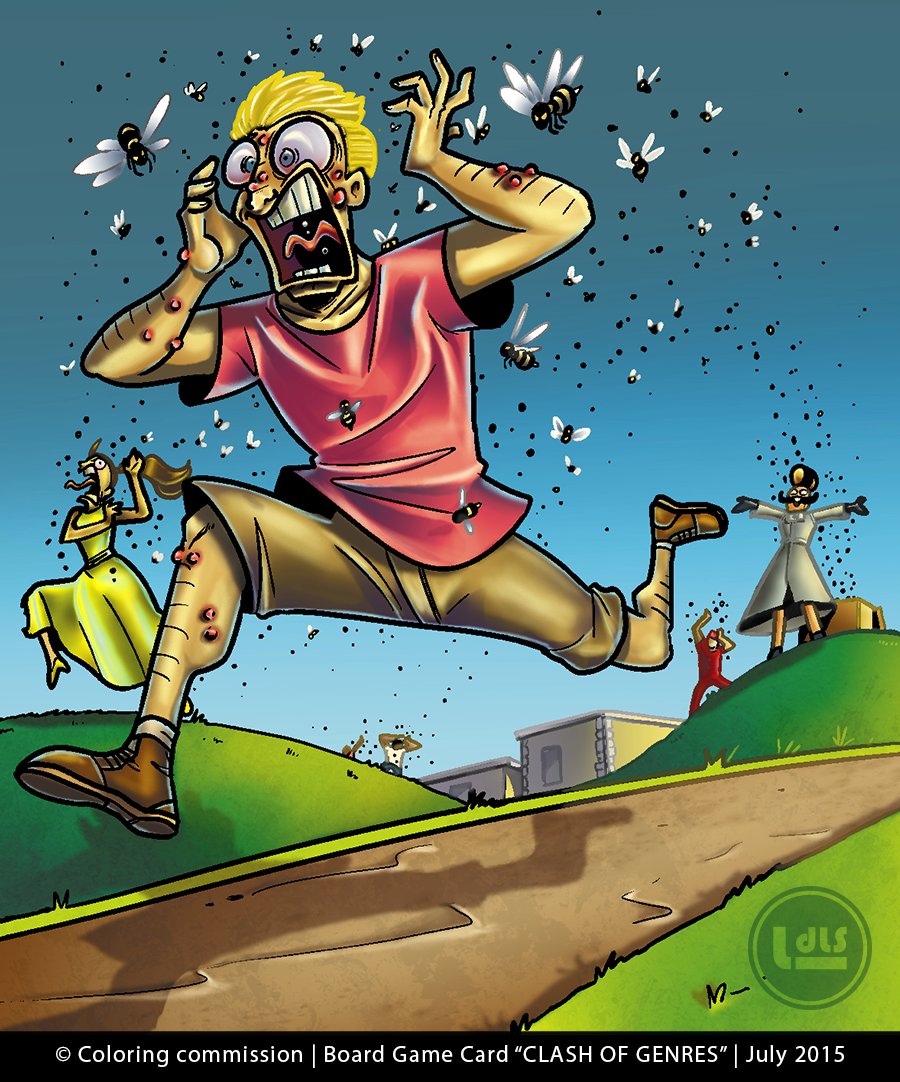 Not the answer you're looking for? Browse other questions tagged reality-check creature-design light .

12
Seeing into the past
7
What is the botanic equivalent to eyes
5
How could a dark-skinned race develop light eyes?
7
How could this flora/fauna symbiosis work?
15
Could an organism see in infrared light as well as normal light, using its brain to process what it sees into a single image?
10
Realistic darkvision?
4
A creature with a built in flashlight
8
How could be a relatively "universal" eye?
5
Enlightening Dark Matter?