How can I make an earthlike planet windier?

I'd like "high winds" (defined by the United States National Weather Service as 40-57 mph, or about 64-91 kph) to be fairly common most places on land. It doesn't have to be constant and doesn't have to be uniform. I'm just looking for a way to up the overall wind dial without rendering my planet uninhabitable. What are my options?

What I'm not looking for:

Without serious modelling or making the actual changes, you will never know the answer.

Climate is very hard to predict. Despite the large amount of effort for climate modelling based primarily upon our concerns about anthropogenic climate change, the models vary considerably in the expected effects and do not predict past history well without considerable tweaking of the result. For example, cloud cover has been omitted from global models (GCM) because it is so hard to model - even though it is known to be an important contributor to climate. Our GCM's push the limits of our best supercomputers, which contributes to the limited value of our GCM's.

Winds are generally considered to be driven primarily by temperature differences, both diurnal and equatorial vs. polar, and Coriolis effects.

Some ways you could increase temperature differences within your constraints would be to increase diurnal variation by slowing the earth's rotation, reducing cloud cover (allowing heat to escape more rapidly at night). Reduced atmospheric moisture also reduces the specific heat of the atmosphere allowing the temperature to change more rapidly - so a two-for-one benefit. By reducing ocean coverage you likely reduce atmospheric moisture and also gain a direct benefit by reducing the temperature moderating effect of the oceans themselves.

Increasing the axial tilt would increase the polar/equatorial temperature difference. Reduced rotation speed, reduces to Coriolis effect. You can't predict the net effect of changes without an accurate model.

There are tradeoffs to consider, e.g. increasing the axial tilt to 90 degrees would eliminate diurnal variation.

For the purposes of story telling, you really don't need the answer, at most you just need a plausible answer. If you tell the reader that wind speed average 60 kph with frequent gusts to 90 kph and focus on the story you'll accomplish your purpose. If you want to explain why it's so windy just do so.

As a reader with a technical background I would be much more interested and skeptical in what caused the planet-wide changes to rotation speed, and axial tilt, and ocean coverage than I would the resulting difference in wind speed. Not that I have any difficulty enjoying a story where parameters like tilt and rotation speed changed without explanation. But if there is a explanation I much prefer it to be believable. 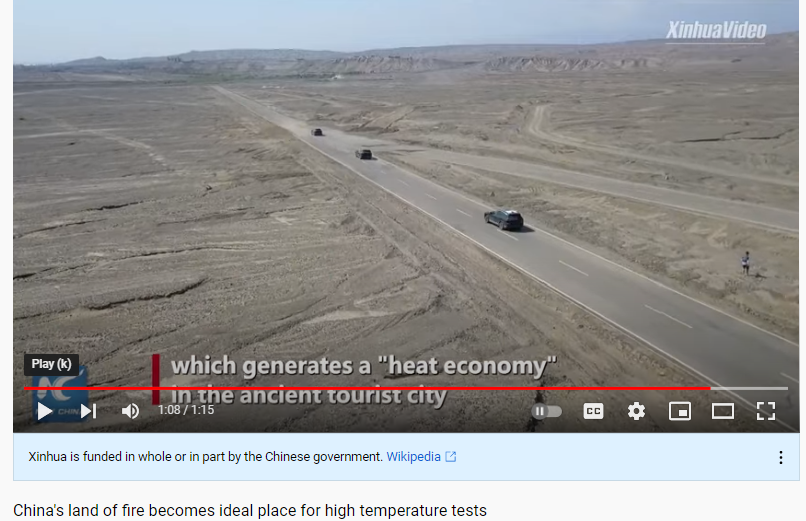 Wind deflation led to the armoring of the land surface, which resulted in an increase in mean wind speeds and gustiness. This informs us that albedo, which is determined through surficial geology (in this case), can have a positive feedback on wind speeds, with the initial albedo perturbation driven by wind erosion

Globally, windy, sediment-, and vegetation-starved desert landscapes can evolve to stone-armored surfaces if supported by the surface mantling bedrock... Finally, as recent work has pointed to this process acting as a primary driver of wind erosion on Mars

The whole article lays it out. Wind moves away whatever it can move away over the years - sand and dust. It loses energy in the process. Once that stuff is gone, stones are what is beneath. The stones cannot be moved and so the wind speeds up. The action of wind over rock produces "desert varnish", darkening the rock. As rock darkens, albedo falls, increasing heat absorption which increased wind speed. It is a feed forward loop.

The end result looks like Mars and the Turpan area of the Gobi desert (where the linked research took place) does look like Mars. Although if you look on Youtube you will not see many Marsscapes but instead well made Chinese videos with young tourists looking at tourist things.

Those videos could be of use to you too because they show how people can live in a desert like this. I think you will need oceans somewhere in your world because the oxygen has to come from plants somewhere and there are certainly none here.

An interesting idea would be a Barsoom like world. The oceans are dead or gone. I think the red Martians had oxygen producing factories. Another alternative would be relic oxygen from before the oceans died. It persists in the atmosphere because there is nothing much to oxidize on the surface anymore.

The Roaring Forties are strong westerly winds found in the Southern Hemisphere, generally between the latitudes of 40°S and 50°S.[1] The strong west-to-east air currents are caused by the combination of air being displaced from the Equator towards the South Pole, the Earth's rotation, and the scarcity of landmasses to serve as windbreaks at those latitudes.

This leads to Wellington NZ being the windiest city in the world: https://www.theguardian.com/cities/2015/oct/15/where-world-windiest-city-spoiler-alert-chicago-wellington

Wellington sits on the Cook Strait, a passage between New Zealand’s north and south islands. The winds of the Roaring Forties, which spin uninterrupted from South America thousands of miles to the west, are funnelled into this 14-mile-wide gap, creating a “river of wind” that rocks the boats in the harbour day and night at an average of 16.6mph.

I am structural engineer. With the International Building Code wind speeds can be predicted based on location, topographic features, etc.

Another option that might be worth considering is the thickness of the atmosphere. Upper atmosphere winds are much higher than surface winds. You might try modeling your world with a thinner atmosphere.

(This may or may not fit, depending. It depends on if your 'anything that that makes the planet uninhabitable without fancy technology' includes 'things that are already built but that you don't need a techbase to take advantage of'.)

Here's one possibility: the planet had a solar shade or solar concentrator installed, once upon a time, that is now partially degraded, so some areas are getting 'normal' solar flux, whereas others are getting artificially high (or low) amounts of sunlight.

That is, roughly speaking, you have a single large Fresnel lens, or more realistically a bunch of smaller ones, sitting near the L1 point, maybe with a few LCD panels for attitude control (as the L1 point is unstable). Rotate each just fast enough to keep the entire thing in tension.

(Be aware that a sunshade doesn't last forever without replenishment. If you want it to be independent of civilization you'd probably want e.g. an automated facility on the moon or somesuch that occasionally launches replacements. I haven't worked through the numbers but even 'just' an asteroid in a stable orbit would likely have the mass to keep it going for a good long time.)

Ice age and vast tundra areas. You need two things as has already been mentioned. Temperature differential and flat land that will not obstruct wind flow. Simple modeling will reveal seasonality of the winds. Arranging mountainous areas directionality with the winds will help. Also make areas that are not affected interesting potentially valuable.

On mobile now sorry for the brevity.

Not the answer you're looking for? Browse other questions tagged science-based climate earth-like atmosphere wind .

3
How do I explain the formation of my world scientifically?
2
What rough climate and/or biome classifications would I assign to a planet with 31.1 degrees axial tilt?
9
Could I have an earth-like planet from which sun and moon would never be simultaneously visible?
23
Can the Little Prince's planet actually exist in our universe?
4
Tidally Locked Planet with no Oceans
3
Is this fictional habitable exoplanet of Alpha Centauri A realistic?
6
How would huge chunks of floating land soaring the skies really fast affect my world?
10
Arrest global warming trend via any means (E without S or G)
3
Could the differences between day and night on this desert planet allow for strictly nocturnal condensation?
10
What would the climate of this habitable world be like?