Is there space in an average animal cell that I could cram some extra organelles into?

From what I can tell, there's lots of room available inside a cell; certainly, all the graphic representations of them I can find seem to show that a lot of the volume of the cell is cytoplasm, as opposed to organelles - in other words, goop, as opposed to things-what-do-stuff. 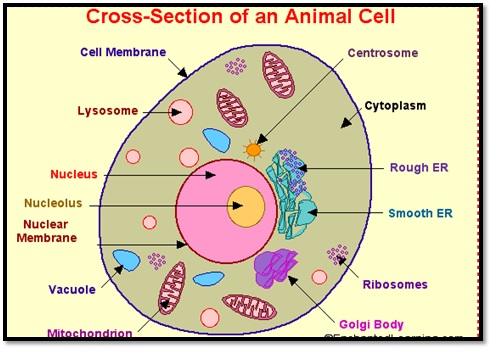 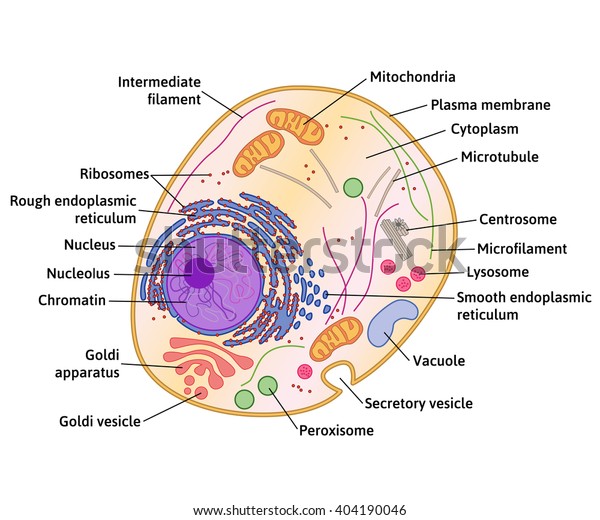 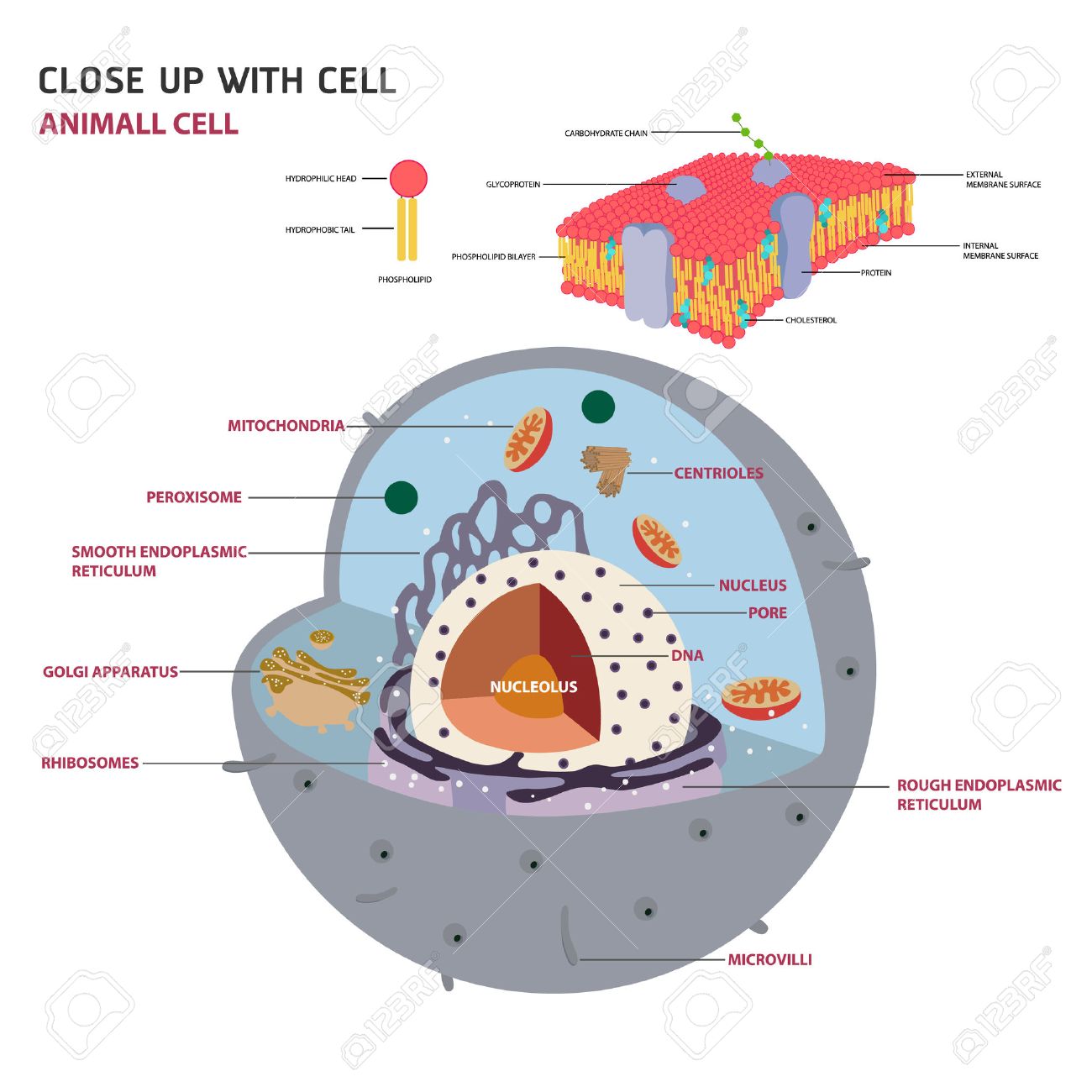 Y'see, the reason I'm asking is that I'd like to put some more stuff in that there stuff: some chloroplasts, extra mitochondria, nanomachines (son!), or a fun little thing I'm cooking up that's designed to cool the cell down by dissolving urea in water, thereby resolving one of the many square-cube law-related problems with giant creatures: heat removal.

Obviously, the answer to this question varies on a cell-by-cell basis, but I'd like to know whether I could replace 5% of the volume of an animal cell (the more types of cell that can handle it, the better) with an organelle or other structure of my own design without seriously impacting the main function of said cell. These images certainly seem to suggest so, but I figured I'd run it by someone else before making myself a Godzilla.

You can just make the cell itself bigger or make the organelles themselves better and more efficient at what they do.

Also, as far as I know, the empty space in cell, the cytoplasm is where cell stores its raw materials, oxygen and food and stuff. Depending on cell types you don’t wanna reduce cytoplasm too much.

Though 5% here and there shouldn’t be a problem

The empty stuff is not actually empty! but you're probably ok, anyway...

Take a look at this beautiful fluorescent microscope image - to get it, you add a protein from jellyfish so that it is expressed with the protein that you are targetting. This image (from wikipedia) has been treated for actin (in red), tubulin (in green), and a protein in the nuculeus (in blue) 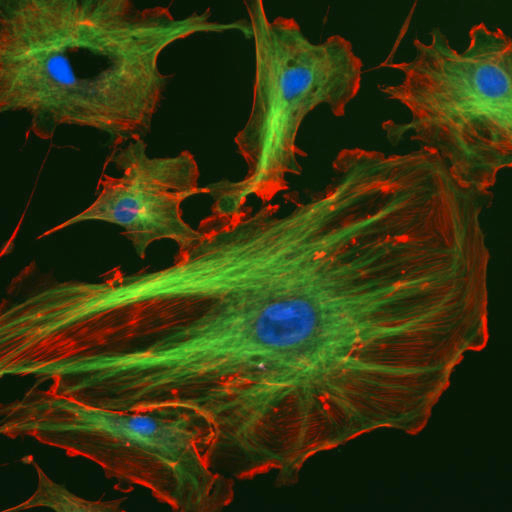 This is only one possible set of stains to use for a cell, but clearly shows that there's more going on than this "bag of liquid with some organelles" structure that everyone is taught in school. There's a structure - the tubulin (green) radiates from around the nucleus, and helps move the proteins from the golgi body to the rest of the cell - think a network of tiny conveyor belts. The rest of the cell is also crammed with proteins - some give structure, some do things, some store things, but the cell is packed!

That said, adding an extra organelle can, clearly, work - mitocondria, cloroplasts all are the remains of micro-organisms that took up residence in our cells, and never left. And, as we look more closely, we see more and more intracellular parasites or symbiotes - wolbachia is an ant (and probably other insect) symbiote that looks like it enters ant cells.

This is possible without wrecking the structure because cells are self organizing. I don't know what it would do to a mammal, but, if we could get it past an ethics committee, I'd be willing to bet there'd be no major changes - the cells would be larger, which might make the organism slightly bigger, but I'd put fairly decent money on it just coming out fine - biology is wonderfully adaptable in this area. 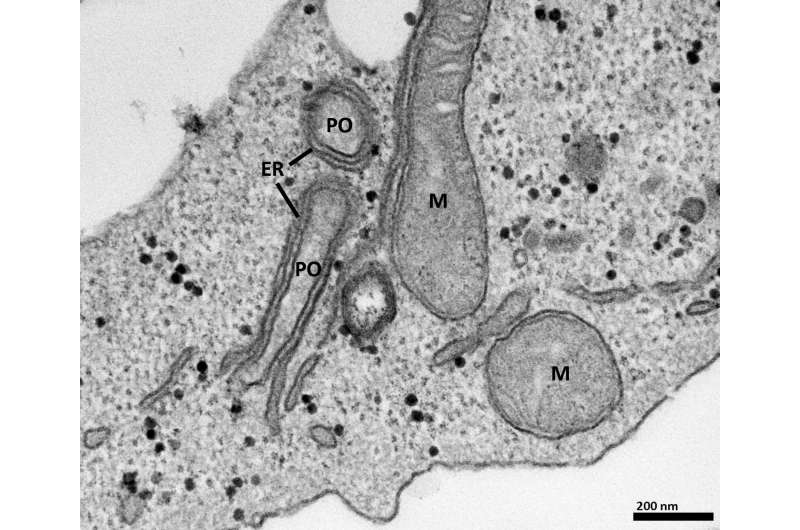 The diagrams are not to scale but here is a microscope image of a cell. See also here. There is loads of empty space.

Cytoplasm isn't just goop, it's made of proteins and other molecules that are important for the cell's functioning. At the micro level there's all sorts of stuff happening there, and it's "doing stuff" just as much as the organelles are. Cells have organelles because sometimes some kinds of molecule need to be kept separate from other molecules for one reason or another, but overall the rest of the cell is made of the same kind of stuff.

Not the answer you're looking for? Browse other questions tagged biology creature-design bio-mechanics .

10
Could there be an animal who breathes CO?
14
How could an animal run fast using blade-like feet that sink into spongy ground?
13
Is there any natural material that could be used to make fireproof feathers?
22
An animal that is physically separated into multiple parts
2
Is there a possible way that humans could experience rapid physical transformation into something more animalistic?
1
Could an animal evolve iridescent horns that appear metallic like chrysina resplendens' chitinous exoskeletons?
3
Is there a real-life intersex condition that leads to functioning ovaries but with some male secondary sex characteristics?
11
Plant that transforms into a conscious animal
5
Could an animal have an iris that changes its opacity?