Would it be possible to excavate a planet and mine it without indigenous citizens' knowledge?

There is a more strict version of Prime Directive on a subspace traveling Empire. This empire (without the morale codex of the star trek crew, maybe more like Avatar) would like to get the resources on this planet

The resource is sufficient unique and valuable to be worth a lot of trouble.

The crew has access to mechanized human slaves, SSTO cargo shuttles and huge transport barges that can be used as livingspace for up to 30.000 people.

Could it be possible with a population spread similar to earth anno 800, to either con people or make the operation sufficiently stealthy so they will never know it happened?

To narrow it down:

Yes, but you need to be careful in how you go about it.

A space fairing civilization that moves quickly enough between the stars that a mining operation in a different solar system is economically feasible, certainly has access to advanced power plants and nuclear weapons.

Depending on the quality of the ore and processing techniques, some tailings will result. In Project Gnome, nuclear bombs were placed far underground then detonated resulting in large underground cavities where the rock was just gone. 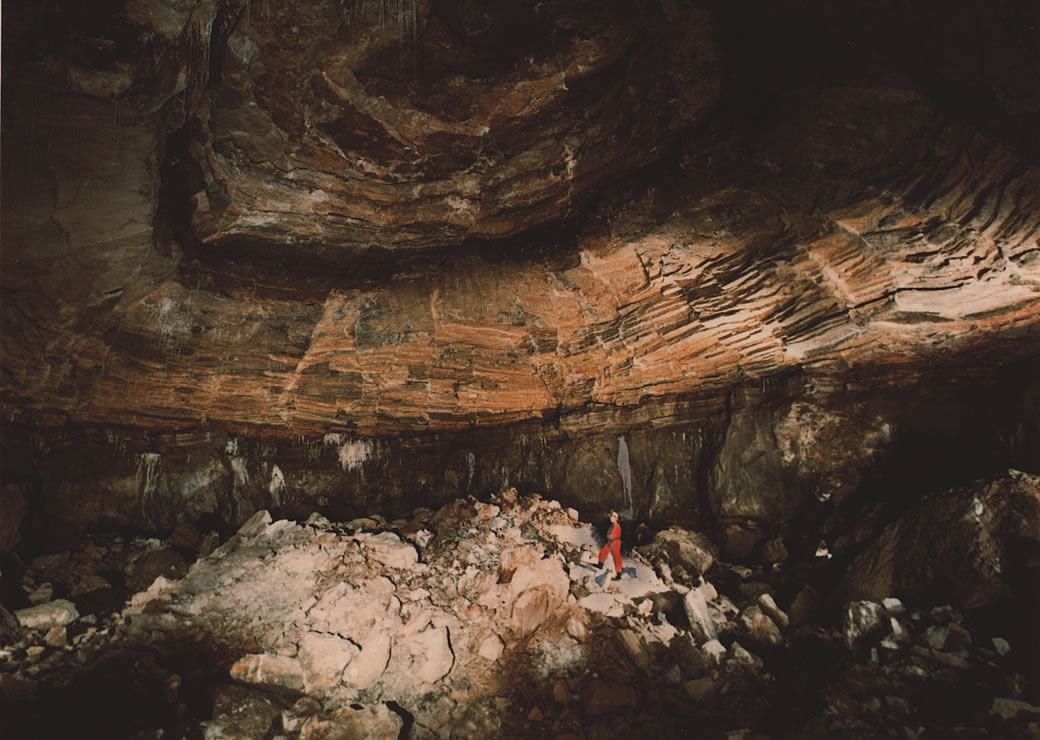 Tailings can be dumped into these explosively derived holes. Care will need to be taken to prevent damage to any local fault lines. Earthquakes for the natives will be terrifying if they aren't already accustomed to them.

If ore processing requires high temperatures then the resulting smoke/fumes can be scrubbed for pollutants. Such processing is coming into use on coal-fired power plants on earth in an attempt to reduce CO2 pollution.

An SSTO based purely on hydrogen/oxygen propellants won't leave any smoke trails as it ascends. In Space Shuttle launch videos, the engines at the back of the shuttle are clearly lit but don't leave any smoke behind. If natives are close enough, all they will hear is a deep rumble that ascends into the skies.

Launch complexes are currently placed above ground because there's no need to place them below ground, however a properly designed sub-surface launch complex is definitely possible. Land-based intercontinental ballistic missiles are launched from underground bunkers. 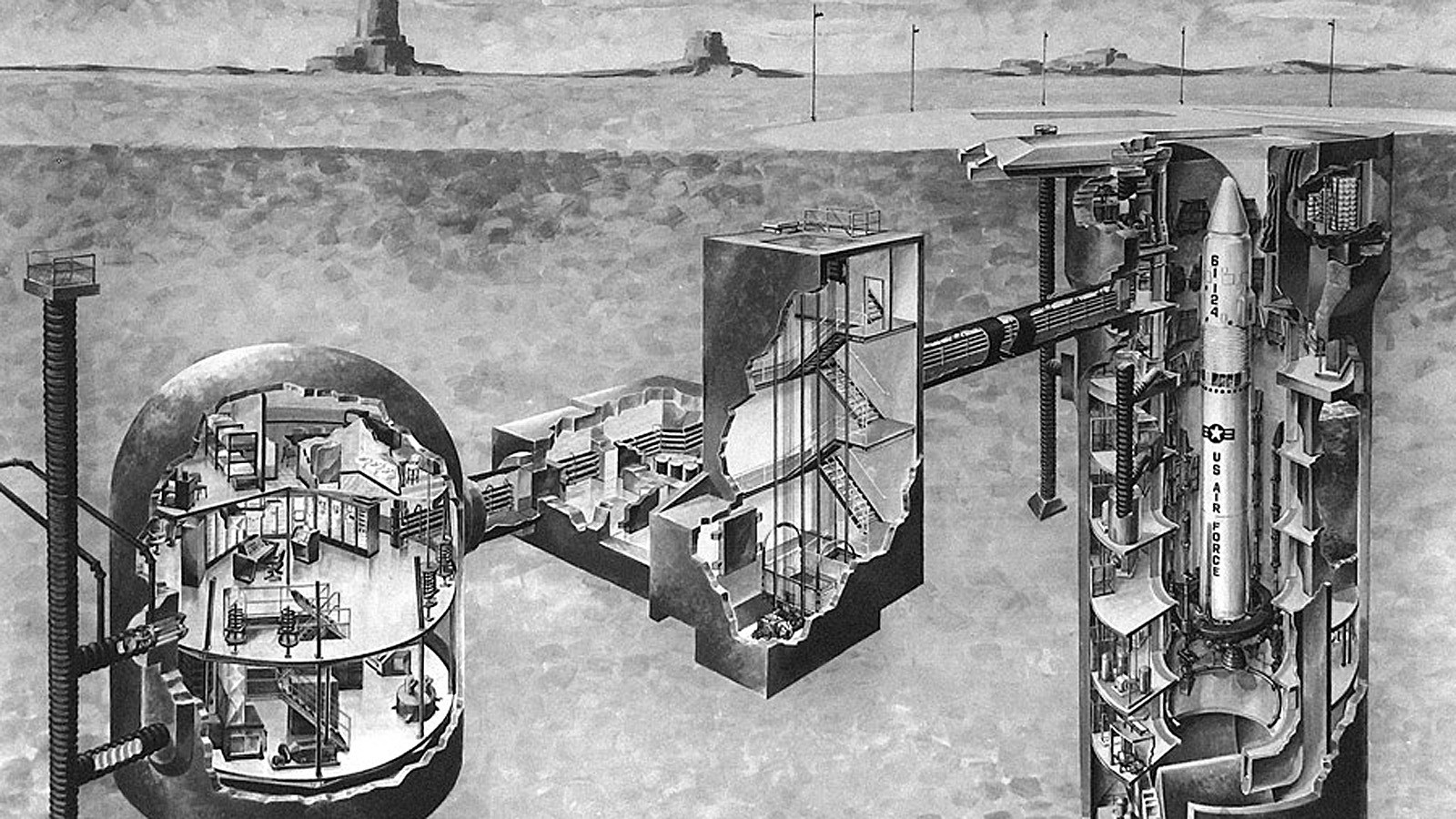 Some natives may just wander into the area where they aren't supposed to be. Fences will be obvious so can't be used. Instead, make the mining and launch areas haunted with strange lights and sounds. Maybe some light, non-lethal sound or light irritation to make it painful for them to be there. It won't take long for them to find another way to go.

The simplest approach, i guess, would be to find a sufficiently remote place for digging. On earth, any of the large deserts would be ideal, but the taiga or tundra should do jsut as well, and depending on the preferences of your raiders, the poles would of course be perfect unless they dislike the weather.
There, you should be able to work pretty much out in the open, and simply capture or kill anyone who should happen to come wandering too close.

Transportation of the raw materials off the planet will surely depend a lot on the means your raiders have at hand. For a very large mining operation, i guess you have either some drive system for ships that gets you out of the gravity well at negiglible expense, or they would set up a space elevator.

With any kind of ship, unless the drive's exhaust shows (like in a rocket), go by day, preferrably on rainy or at least cloudy days. If the drive has no bright exaust, go any time you like. Again, capture or kill anybody who is nosy enough to come visiting.

This answer at space exploration shows how far a launch from wallops island can be seen. So if you want the natives to have no indication that you are there you need your launch sites to be about 400km away from them. Since this is far longer than how far the mining can be detected this is the chief limiting factor.

For the launches, yes. It's highly unlikely that AD 800 people should be able to identify the rising pillars of flame that a rocket launch is with an attempt to go to space. However expect the natives to be curious and expect them to attempt to travel to the apparent launch sites. So if the launches are visible from native setlements you would want to use a hybrid launcher that can perform low level flight for an extended distance before launching into space. This will allow you to mask the actual launch site from the apparent launch site. So to "trick" the natives into having false belief about your launches just don't avoid comunication. They will come up with explanations, and those explanations will almost certainly be wrong.

For the mining operation it depends on the details of what and how you are mining. Strip mining would not be something the natives would have experience with, however they would be able to identify what is going on. Any tailings will also be identifiable as tailings - even from descriptions, allowing identification of mining. The extent that you produce tailings will depend on the purity of your ore.

Finaly the actual mines, I suspect that descriptions of these from a passerby would not be different than natural caverns. A native mining expert might be able to determine that the caverns are non-natural. However if you are avoiding strip mining and tailings you should be able to hide the mine entrances.

If you don't strip mine, and can hide your tailings, the natives would probably have to observe the mining operation directly in order to identify what is going on.

As long as you are not doing surface mining, and are not close to within direct visual range of native settlements, just close operations down when a native gets close.

WH40K specific EDIT: In the WH40K universe there are some other conserns. The natives are probably human (Otherwise we nuke them from orbit and don't care what they think) meaning we do not look like aliens to them. Also we have matter annihalation technology like the void grenades that can deal with tailings and similar. - Although this might not be economically feasible. Strip mining would still need to be avoided, and operations should still cease when natives happen to wander close. Masking launches as described above might be harder, the hybrid launchers I desribe would be a custom job. - Which would be heretical and likely leave you in far greater trouble than if you just killed everyone in the closest villages. However vessels capable of both air and space flight is available so you just need to be selective in chosing your launchers. Also care must be taken if relying on mythology to explain away the launches. For obvious reasons the natives might have "myths" similar to "our ancestors rode the between the stars on pillars of flame" - if they to the risk of correct identification of what the launches are increases dramatically.

When the civilization has a technology level of Earth A.D. 800, they are still centuries before Gallileo and Keppler, so they have no idea that other planets even exist. Their development is too early to even imagine the existence of extraterrestrial life. Likely some parts of the world don't even realize they are living on a sphere (the knowledge that the earth is round did exist as early as the antique, but was not common knowledge everywhere).

That means that any space vessels in orbit or flying through the upper atmosphere will likely not be perceived as such. They will either ignore them or find some mythological or pseudoscientific explanation for them. No effort on hands of the invaders is required for this.

The only population they might need to worry about are those in the immediate vicinity which are so close that they might witness the mining operations or be close enough to take a look at the space ships while they take off or land.

This could be avoided by preferring to perform mining operations in unpopulated areas.

When this is impractical (the most valuable and accessible resource deposites happen to be in densely populated areas), the local population will need to be relocated. When time is not of a concern, this can be done in a sublime way. Weather and environmental manipulation can be used to cause several mis-harvests and force them to relocate to somewhere with more favorable conditions.

When the invaders are impatient, they can also forcefully depopulate the area by causing a disaster which will look natural to the population, to future generations and maybe even observers with the tech level of the invaders. Like a supervolcano caused by a subterran explosion, a meteroite which was directed on the right trajectory or a plague which was actually a biological weapon.

Not the answer you're looking for? Browse other questions tagged psychology natural-resources or ask your own question.

16
Would it be possible to smelt and craft things from salt
4
The Desert of Ore, how would people mine and process ore sand
42
Is it possible for a mine to contain both gemstones and precious metals?
3
Would planting trees across an earth-like planet to reduce the CO2 and produce O2, be enough to keep it in balance?