How can a hierarchy within a religion alter central beliefs that have already been accepted as a core tenet to its faith?

Citizens of the Byzantine Empire worship a state religion known as Arianism, which sees the Blessed Trinity as a heirachy with God the Father, God the Son, and the lower entities that inhabit the Astral Plane. These entities are essentially smaller pieces of the deity that operate as messengers and serve as intermediaries between God and mortals. These worshippers believe that the purpose of human life is to emulate God through thoughts and deeds by following the example set by his son, the Messiah. This is done through the purification of mind and body with fasting, prayer, and living according to God's will. By being in line with the rules of the faith, one can become closer to God physically and spiritually. One of the highest achievements of any follower is the binding of a higher entity from the Astral Plane with a ritual summoning, in which the spirit willingly submits themselves to the authority of an individual who has proven themselves worthy with their faith. Through this ritual, a pact is made between the spirit and the individual, allowing a person to summon the spirit in times of need to perform a service. This is regarded as the highest honor an individual can achieve, as it shows that they have gained the favor of God.

There is a cult within the main faith that takes this logic further through the process known as theosis, or deification. This is a transformative process whoose aim is to achieve likeness to or true union with God. Only the most devoted followers of the deity would dare to attempt this ritual. To reach this state, a person must undergo intense fasting and prayer for a certain degree of time leading up to the event, as well as repeated ritual cleansing of the body to prepare themselves. At the time of theosis, the individual fuses with the spirit they have bound, with both beings becoming one in mind, body, and spirit. As the higher entity is a piece of God, the resulting being is said to exist within a hypostatic union, with the twin natures of both separate beings intertwined with each other, sharing one divine nature. These individuals are referred to as saints by the cult, for they have reached an exceptional degree of holiness, likeness, and closeness with the deity, making them deserving of higher honor and veneration.

Despite this seemingly benign act, the larger church views this as a great heresy and has declared this sect as heretical. Higher-ups within the faith feel threatened by these saints as they have begun to be more venerated among the laypersons, rivaling them in influence. Therefore, the priests wish to denounce them as heretics and traitors, causing a schism which will launch the nation into civil war. However, this is seemingly nonsensical, as people can see these living saints for themselves, making them difficult to condemn. In addition, as the cult is operating within the bounds of church doctrine, they are simply taking it a step further to its ultimate conclusion. By becoming one with a piece of God, it allows for a more intimate connection with their deity and allows them to live closer in line with his will, which should be considered honorable. This trail of thought has been accepted for generations, and simply changing course will discredit the priests rather than the ones the intend to target.

How can a religion change course in its relationship of sainthood through deification without discrediting its reputation among its people?

It is seen as a desecration to the divine nature of God to combine your soul with a piece of the divine. You elevate yourself of course. But in return your original sin taints the spirit and brings it closer to the mortal world. The absolute audacity. You should be ashamed of yourself. Know your place.

Hypostatic union only happened once. See Jesus of Nazareth. Hypostatic union was a special gift God gave to us only once in our five thousand year history. It is God who decides when it happens. It is not for us mortals to decide.

For a real world example consider the execution of Saint Peter: 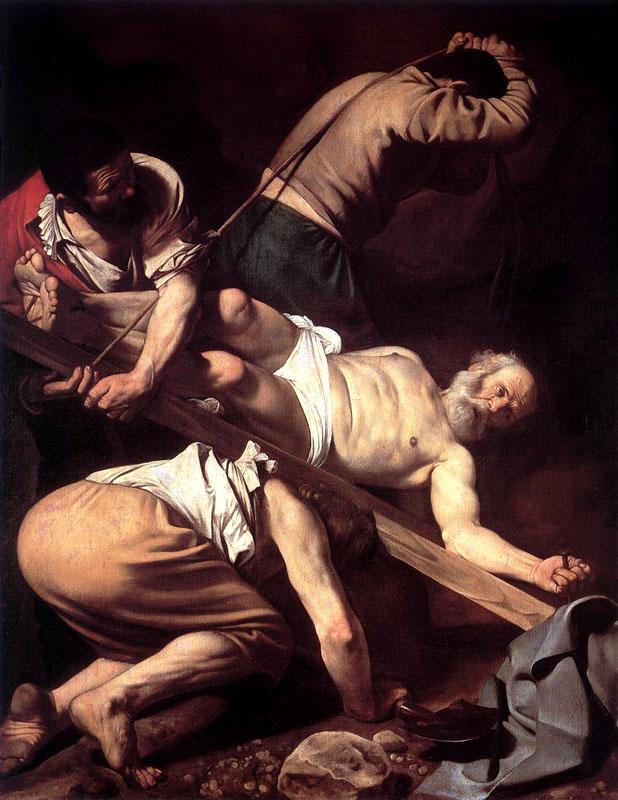 Peter requested to be crucified upside down because he thought being crucified normally had become too holy by virtue of Jesus doing it. He was not worthy to be killed in the same manner as our lord.

I would expect many modern Christians to become upset if crucifixion was portrayed in a manner unrelated to the the crucifixion of the Messiah.

As I understand you, this is a non-historical setting somewhat reminiscent of Christianity. One of the differences is that "micracles" can be performed with a reasonably good reliability, frequency, and detectability. Not cancer going into remission because somebody prayed, but a guy from an island walking on water, every week, so he can make it to the church service. Or something like that.

One of the issues with your scenario, & it is not dissimilar to situations that have occurred in the past, is the clergy are not in control of what the cult are doing. They like to be in control. They can declare that what the cult is doing is not sanctioned by the church or they can accept it provided they can manage & control it & get money out of it. Most religions will state that their religion is not a smorgasbord where people can pick & choose what they want. Abide by the "true" word as revealed by the clergy or face the consequences. Religions are not democracies, they're authoritarian.

Accept the concept of sainthood, with a caveat.

Only a priest or priest designate can become a saint, and only under the auspices of the church hierarchy.

Not the answer you're looking for? Browse other questions tagged society religion .

7
How can a single clergy rule over a religion that has different interpretations of its deity?
29
How can I frame human sacrifice as an honor without marketing it to the disadvantaged?
25
How can I define good in a religion that claims no moral authority?
9
How can religions be structured in ways that allow inter-faith councils to work?
16
How can a religion rationalize worshipping deities it has enslaved?
13
How can a hypostatic union be the preferred fusion between gods and mortals?
10
How can an expression of a god's power be used to authenticate the legitimacy of a sect within a religion?
11
How can a matriarchal religion support a patriarchal structure?