How long would it take for a Roman farmer to learn about Julius Caesars assassination? [closed]

Ask Question
Asked 1 month ago
Modified 3 days ago
Viewed 6k times
29
$\begingroup$
Closed. This question is off-topic. It is not currently accepting answers.

I'm writing a story that follows the life of a poor plebeian farmer in the late republic. While I was working on the plot, I realized a potential plot hole: such a person would not learn about the assassination of Caesar instantly like we would in modern times. In all likelihood, it could take weeks before such news would reach the other side of the republic.

The following are true:

With these qualifications, when, if ever, would they learn about the death of Caesar?

transportation travel ancient-history
Share
Improve this question
edited May 28 at 11:56

There's a lot of historical research into the speed of messages in the Roman empire.

Rome had a courier system where riders would ride between stations switching out to a fresh mount. In normal conditions such a rider could cover 60-100km per day. In an emergency situation, such riders could travel as far as 160km in a day.

The geographer behind the Facebook page "Simon shows you map" has published a map showing the fastest travel time to reach places in the empire from Rome in July. 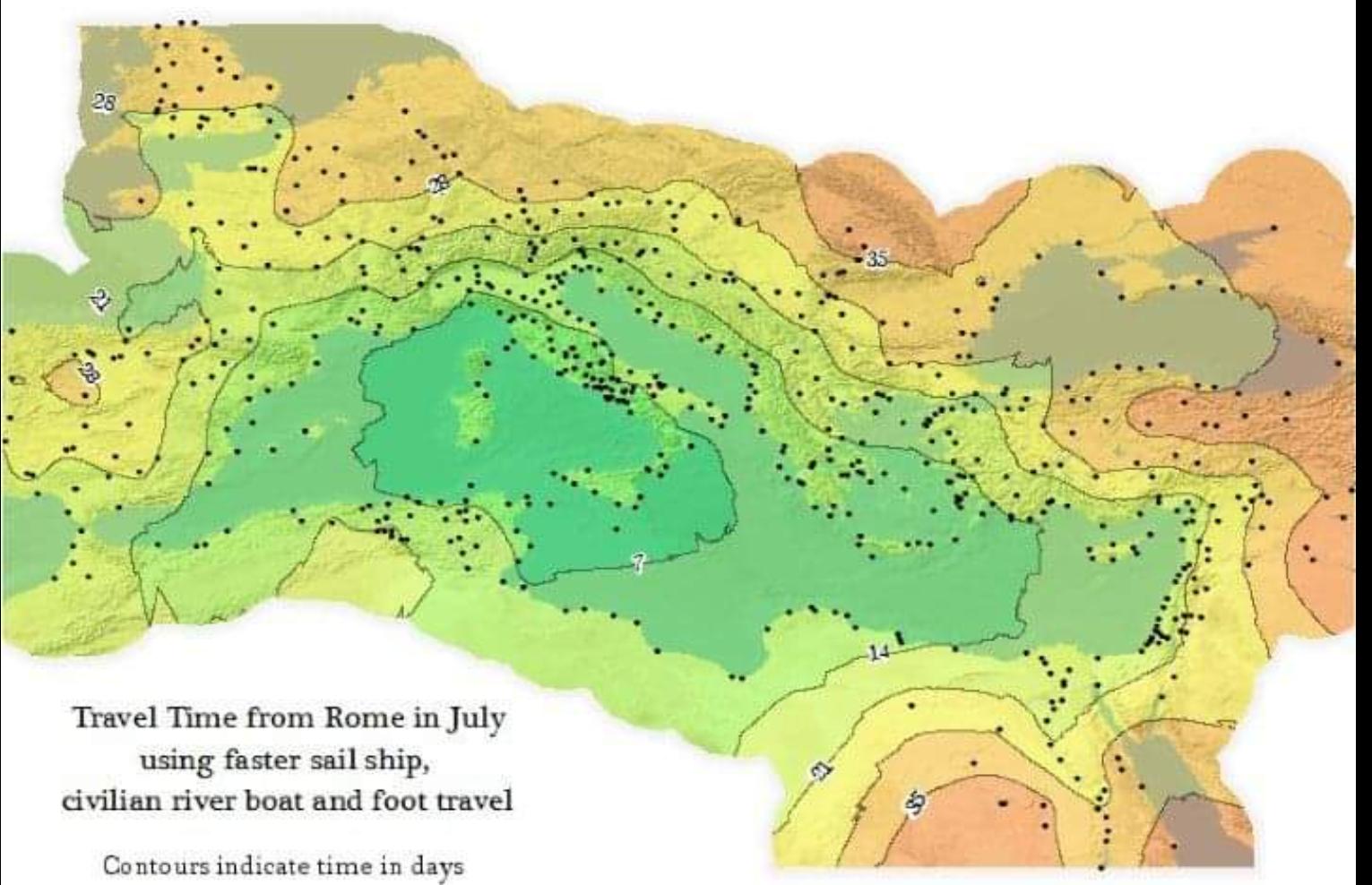 You can use it as a reference for a lower limit. It looks like in 35 days the borders of the empire could be reached, Anatolia included. Times could be shortened by using horses instead of walking where possible.

Additionally, you can use this very handy tool can be used for a more thorough estimate

ORBIS allows us to express Roman communication costs in terms of both time and expense. By simulating movement along the principal routes of the Roman road network, the main navigable rivers, and hundreds of sea routes in the Mediterranean, Black Sea and coastal Atlantic, this interactive model reconstructs the duration and financial cost of travel in antiquity.

From Rome to Comana in July it computes 35 days with the fastest route, which I assume is the one which would be used by a courier carrying the news.

4-5 Weeks for an Actual Citizen Farmer

The actual time it will take news to reach Anatolia is 2-6 weeks depending on exactly where the farm is. Since this is a "citizen" farmer, this means he is probably somewhere near the Roman Colonia Şebinkarahisar which is 4 weeks away from Rome and the only place in Anatolia where you might have found citizen farmers at this time. So, while news of Caesar's Death may first reach the region in just a 2 weeks, a citizen farmer would live no less than 4 weeks from Rome.

As for a minimum time-frame: a citizen farmer would probably learn of the event much sooner than most other farmers would. Just before his assassination, Julius Caesar was planning to pass through this region to wage war on Parthia. This would have been a very significant event for the farmer who would have been expected to either supply the army as it passes through or be drafted into it. Being a citizen, he was likely already preparing for the later by the time Caesar was killed; so, news of his death would have been especially important news to this particular farmer at this particular time and place. So much so, that it is likely the local legate would have to dispatch new orders to the citizen farmer to compensate for news of Caesar's death.

2-14 Weeks for a Non-citizen Farmer

While the death of the Emperor is certainly gossip worthy, it's not vital news to the common farmer. This means that it is unlikely for someone to hear news of Caesar's death and bee-line it out into the countryside to let this random guy know about it.

The most likely time for a rural farmer to learn about it will be when he is going into town to sell his wares since this itself would be the event where news like this would normally be learned by a rural farmer. Julius Caesar was assassinated on March 15th; so, to know when the farmer would be going into town next, we need to know what crop he was growing. The most common spring/summer crop of Mediterranean Farmers was wheat. Wheat's harvest season in Anatolia lasts from April to Late May. But before he can deliver his harvest, he first needs to dry and thresh it. Due to the laborious nature of Roman Threshing techniques, we can assume this will take another 3-4 weeks meaning that a typical time for an Anatolian Wheat Farmer to arrive in town with his harvest would be some time in Late June or Early July.

While it is always possible that news could arrive at this particular farm at any point after the news arrives in town, news will generally travel much slower between April and Late June because of the time sensitive nature of harvest season. So, while 2 weeks is possible, 14 weeks is more probable.

A poor plebeian farmer Roman Citizen would probably not live in rural Anatolia. As a farmer, he would more likely live in a rural area in Anatolia than in acity, obviously.

Here are links to maps of the Roman Empire or Republic in 44 BC at the time of the assassination of Gaius Julius Caesar, the eternal dictator.

YOu will also knote that the maps disagree a lot about the areas of the Roman Provinces in Asia Minor.

In most Roman provinces most of the people would be non Roman in 44 BC. Romans would be a minority in each province. Many of the Romans in a province would be military or government employees assigned there temporarily, or Roman merchants traveling to and from the province on business trips.

Other Romans might live in a province permanently. The Romans did establish colonies of Roman citizens, being cities or towns surrounded by farmland, all owned by Roman citizens. If your farmer was part of a Roman colony, he would probably live no more than one day from the city or town at the center of the colony, and so would probably hear the news of Caesar's assassination only about a day after the town learned about it. You might want to find out about colonies of Romans - if any - established in provinces in Asia Minor before 44 BC.

And of course there were even fewer Roman citizens in parts of Anatolia that weren't provinces of the Roman Empire but client states. Some Romans would visit those regions on official or commercial business.

And of course some Romans could live in client states permanently. Possibly your farmer became a tenent farmer of a rich Hellenized landowner in one of the client states, or even managed to acquire a small plot of land outside the borders of the Roman Republic.

But in 44 BC most of the peope in Asia Minor were non Romans speaking a variety of non Latin languages. Aramaic may have been a very wide spread language in Asia Minor for centuries. During the Hellenistic Age most of the upper classes and the city dwellers became Hellenized Greek speakers. And Romans who spoke Latin would have been a small minority even in the Roman provinces in Aisa Minor and an even smaller minority in the client states which were not part of the Roman Republic.

Not the answer you're looking for? Browse other questions tagged transportation travel ancient-history .