What does a creature with green skin look like with more/less melanin?

First off, the creature doesn’t have melanin, as melanin is (from what I can tell) a dark brown pigment. However, the word “melanin” gets my point across well, hence why it’s in the title.

Let’s say that there’s a creature that’s essentially a copy-paste of a human, except its skin is green.

biology species races
Share
Improve this question
edited May 26 at 4:40

Melanin is, indeed (but simplistically), responsible for skin color. So in a similar manner, you have a pigment that colors the skin green rather than brown. How it does that is irrelevant.

So what color do you get when it's not there? Unless you change the rules of your world, you'll get the same thing we get now: white (lack of color) with hues of red (blood and muscle).1 Research albinism to learn more. Remember, the skin is basically a canvas and the pigment, like any pigment is adding both color and opacity (the absorption of light or the inability to pass light so it would reflect off the lower skin, capillaries, and muscles).

Opacity with skin is an interesting thing, because it makes the skin harder to see due to lower reflected light — which our eyes interpret as dark or black.

So, not surprisingly, if there's a lot of pigment, just as humans shade from brown to black, your people will shade from green to dark green (possibly even black) — because you're not just deepening color (green), you're also adding opacity.2, 3

2 And if you deepen any color enough, it will always shade to black (eventually opacity wins out over any hue). Likewise, if you lighten any color enough, unless the background is something other than white, it will always shade to white, because the lack of opacity (aka, transparency) will also win out. When it comes to pigmentation, one only gets lovely colors somewhere between complete transparency and complete opacity.

3 The astute reader will realize that pigments, canvases, and color are a bit more complex than I stated in my answer. But so is the nature of melanin and how human skin reacts to light. At that level of detail, a green-skinned person seeking a good tan should become more brown because the point of melanin is to protect from sunlight damage, not to color the skin brown. From this perspective, it would actually make sense that an albino on the OP's world would be a bright green (not white) and would otherwise shade from green to olive, moss, seaweed, and finally black. So I ask that the astute reader please consider the value of the simplification to worldbuilding and my assumption that what the OP wants is a being that turns green rather than brown with more pigment before getting caught up in the scientific fine print. Thanks.

Any excuse for a picture of Emma Stone. 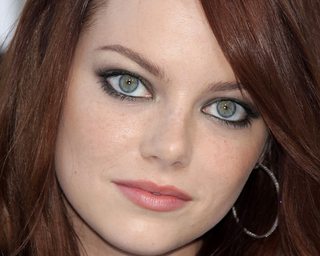 But she is here to illustrate green eyes. Humans have only one pigment which is melanin. It is responsible for eye colors. If you have a lot you have brown eyes. Less and you have green eyes. Less yet and you have blue eyes. Almost none and the irises are light violet probably from a combination of being very light blue and some red from the blood vessels shining thru.

If you use pigment molecules to create the colors of your aliens, you can have them be colored like human irises. A green alien with less pigment will be bluer.

Not the answer you're looking for? Browse other questions tagged biology species races .

3
Easiest way to turn my space colonists into savannah-adapted beings?
17
How can I explain alien skin being different colors?
5
A predator with pseudo-invisibility, partially achieved by airborne chemicals
6
How much can I expand human color perception by adding new photoreceptors?
10
How can an illness make one's eyes turn green?
11
Augmenting melanins with Prussian blue?
6
Would a copper-based pigment give my Orcs green skin?
4
Best shape and location of a piezoelectric plant?
1
How would a human/floral humanoid offspring look?