Navigation and time-keeping on a slow spinning planet

I'm working on a story set on a planet that spins very slowly. Days and nights last years, and since it's either scorching hot or freezing cold, people, animals and all living beings must travel between the narrow temperate stripe of perpetual twilight. Both poles are covered in water, so only aquatic animals can live there.

The inhabitants of this planet must always be on the move, taking care of keeping the sun just on the horizon. If the sun rises too much, they burn. If the sun sets too much, they freeze to death. They have to be always "at the same hour", but, if they move at the same speed as the sun sets, do the stars in the sky still move? I know it's a problem of perspective. I can not grasp how these stars move exactly, or if they move at all.

I'll leave here a diagram of the celestial sphere of this planet. 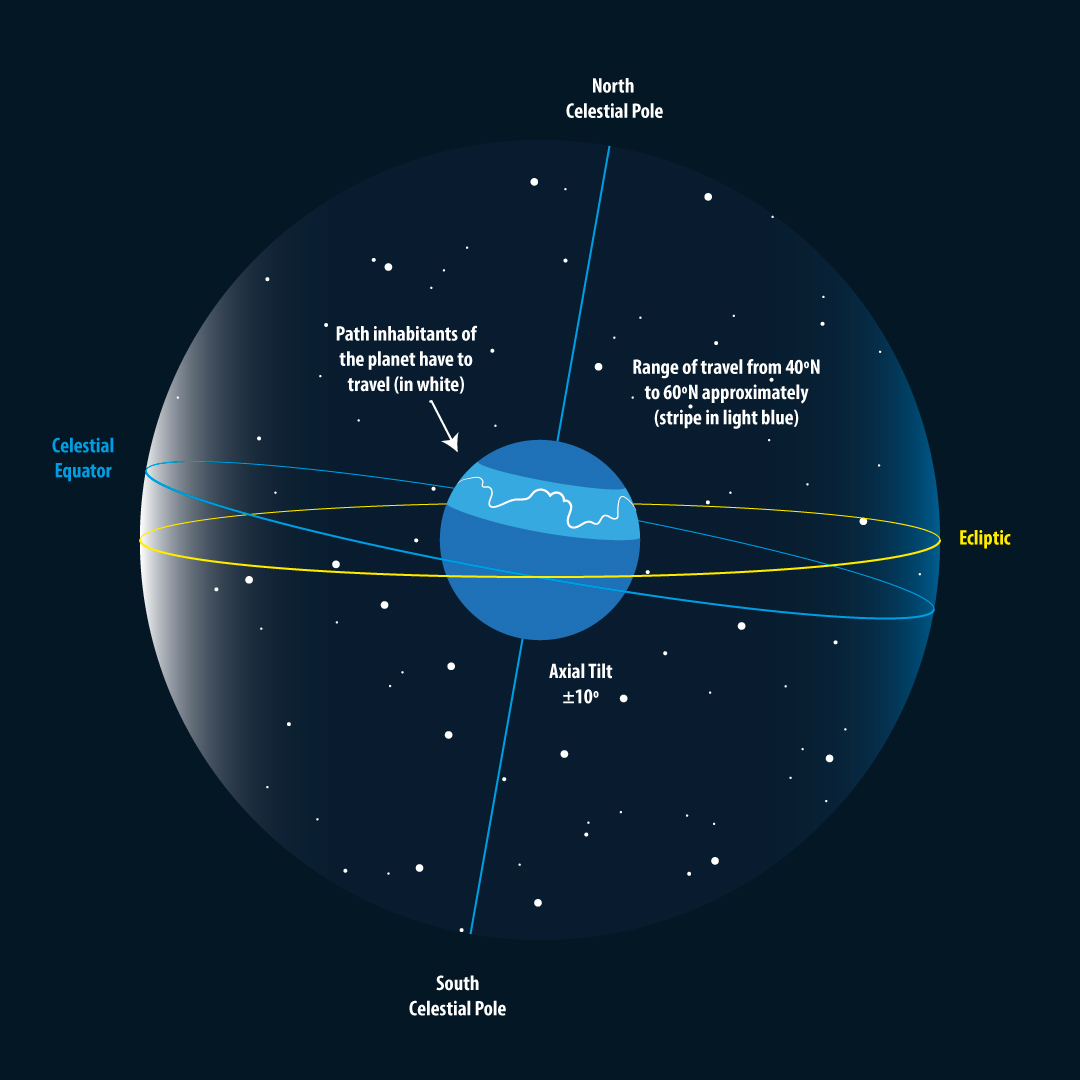 The axial tilt is around 10º. The day lasts about 17 years. The mass and size of this planet is roughly the same as the Earth. These people live in latitudes between 40ºN and 60ºN more or less, so the actual distance they travel a day is about 25.000-30.000 km (15.000-20.000 miles). The day and the year do not last the same, the planet is NOT tidally locked. All these measurements are approximate, and they can change if needed, so don't stick to these figures, I only need a general idea of the apparent motion of the skies.

Thank you very much for your answers. Please tell me if something is not clear enough.

astronomy time-keeping navigation nomads
Share
Improve this question
edited May 25 at 22:05
MoholyNagy
asked May 25 at 21:40

For any star to always be "locked in place" to a construction (some stonehengy-like-thingy) would require the planet to be not turning and not orbiting. If it turns at all, then the entire globe of the cosmos is revealed in one rotation (or, more accurately, the entire hemisphere of the cosmos, unless one is standing on the equator). And if it orbits at all (using a 2D example to make the point), then there is a time each year when the sun is between the star and the construction. No combination of orbit or construction will circumvent this.

Worse, the idea that the planet is rotating at the walking speed of your nomads — which might have significant consequences for its magnetosphere — doesn't solve the problem of the orbital speed, which must meet certain mathematical realities or the planet can't stay in its orbit.

First of all, your people are nomads, constantly moving. So the question can't be whether or not a star can be locked to just one construction, because the nomads will only be at that construction once-per-really-long-and-enhausting-journey-around-the-planet.

But what if there's a series of constructions. Could the same star be seen at each construction if the nomads are using it at the proper time?

We're back to the problem of rotation and orbits... unless I consider a star like our own North Star, Polaris, and if we stick to your basic chart, then an equivalent star would be visible in the night sky all year round. The closer said star is to the axis of the planet's rotation, the more it will be in the same spot every night all night long (assuming their path around the world is more-or-less along the same latitude).

So, yes, if you're willing to live with some basic astronomic realities...

A north star would work perfectly for any construction designed to refer to it anywhere along your nomads' path. Not surprisingly, the construction, like a compass, will always point north. In that regard, a compass would be much simpler than a construction — but you didn't mention the tech level of your nomads. This solution will work regardless the speed of rotation or the position of the planet in its orbit.

A "north star" that was a little off-axis would be more fun because the constructions would need to be more intelligently placed. They would not always point north. This solution would still be independent of the planet's orbit, but would be dependent on its rotation, meaning if you can't see the star through the construct, you're either too early or too late (early is recoverable, late is bad...).

However, the further off-axis the "north star" is, the more dependent its visibility will be on the orbit of the planet.

Why are you working with just one star? Humanity started giving names to constellations pretty much as soon as it learned to draw with a burnt stick. The repeatability of those constellations through the course of a year has been constant for all of recorded history. Thus, your problem ceases to exist if you permit more than one star (aka, constellations) to guide your nomads.

We have arrived in the valley of Carook! The fields are lush with the grain we planted when last we were here and the forest is full of game! Send L'due and N'yela to stand at the Star Stones to see if the toes of the Leaping Jester are at least twenty rotations of the sand glass from standing atop the stones. We must leave the moment the Jester stands upon the stones!

By definition if the stars move noticeably in the sky they will not remain aligned with specific locations on the surface.

You can visualize this in two dimensions with a coffee cup. Identify some point around which your cup will orbit. Identify some points outside the orbit to represent some stars. Pretend your coffee cup is your planet and the handle is some location of interest on the surface. If you keep the handle of your cup oriented towards a distant point throughout its orbit, then the star will always be above your point of interest, if your cup rotates at any other speed, then the star will change position relative to the handle, throughout its orbit.

Technically if your rotation or orbit wobbles there will be some minor movement of the stars but a minor cyclic movement on the order of a year, is going to be slow enough to always be effectively overhead, from the point of view of ground based observers.

Not the answer you're looking for? Browse other questions tagged astronomy time-keeping navigation nomads .

5
How to rapidly make an Earth-analog turn into a scorching wasteland?
2
Environmental conditions on quasi tidal locked planet
13
How would living at a pole affect mapping and navigation?
7
Navigation on a tidally locked planet
10
Which part of the universe would make celestial navigation most difficult for a planet?
0
Stabilizing Synchronized Orbit
7
How to make other stars visible to the naked eye in the day sky
2
Calendar-Worthy Events on a no-axial spin distant future Earth
3
Climate on a slow spinning planet