How can a desert be converted into a lush rainforest with magic?

Assuming an elemental form of Magic that allows the mages to control fire, water, earth, and the wind itself (with some limited power to change states, like turning ice to steam and vice versa), as well as the ability to impose your will upon the weather. Not the climate, just the weather. Climate control will have to be done the slow way- by using the terraformed earth to convert it.

The region is a vast plain in the interiors of a peninsula, with what used to be a large river system but is now barely a single large river running through it. The rest of the land is a hot, arid desert that is mostly rock. A few oasis here and there allow the barest traces of human civilization to continue, but only barely.

The mages have a century or so to transform the region using all the power at their disposal. Their powers are stated above, but I add that they don't need to be concentrating at the spells every moment. A mage can command a cloud to rain a certain amount and then just go do something else, and return only to switch his spell off.

There are 500 or so Mages, and they need to turn this arid desert into a lush forest with greenery everywhere. Tropical plants to plant are at their disposal already, and so are animals that used to live there before the disaster that changed the climate (implied to be a magical drought that held back rains for centuries and destroyed the glaciers).

They need to change it back- but what exactly must they do? I have considered that they probably need to rebuild the glaciers that fed the old river system, which can be done by freezing magical rainwater onto the mountains. Lakes can also be built, and winds manipulated to keep down erosion of soil. Seas that the rivers drained to can supply some water through desalination (it's not difficult to use magic to separate salt from water). But now that water is obtained....well, what else should be done?

The mages direct moist sea air upriver until it hits the mountains that used to be the sources of the now-dry (or nearly dry) rivers. As the air rises upon contact with the mountains, it expands and cools until the moisture reaches the saturation point (which is lower for cold air). The excess moisture is then released as rain (see diagram below). Look here for more detail of this effect, which is responsible for wet, fertile areas where prevailing winds hit mountains. 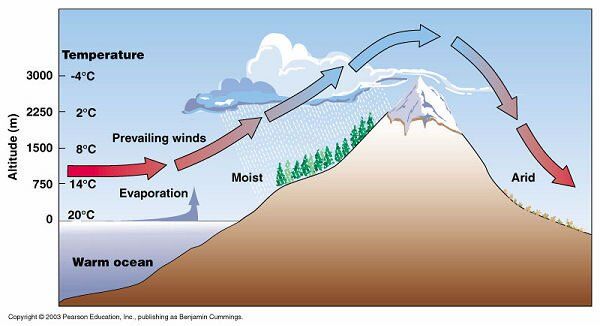 As a side effect, the areas behind the mountains will get warmer and more arid. This is because once the rising air reaches the saturation point, it loses energy by releasing water rather than cooling. The dry air going down the other side gets warmer as it contracts, heating the low-lying areas there while not releasing any rain. This is what makes Death Valley so hot and arid, not far from the fertile land on the windward side of the Sierra Nevadas (see humidity map below). This doesn't necessarily turn this land intoi desert; Sweden is quite fertile despite being on the leeward side of the mountain range separating it from Norway. 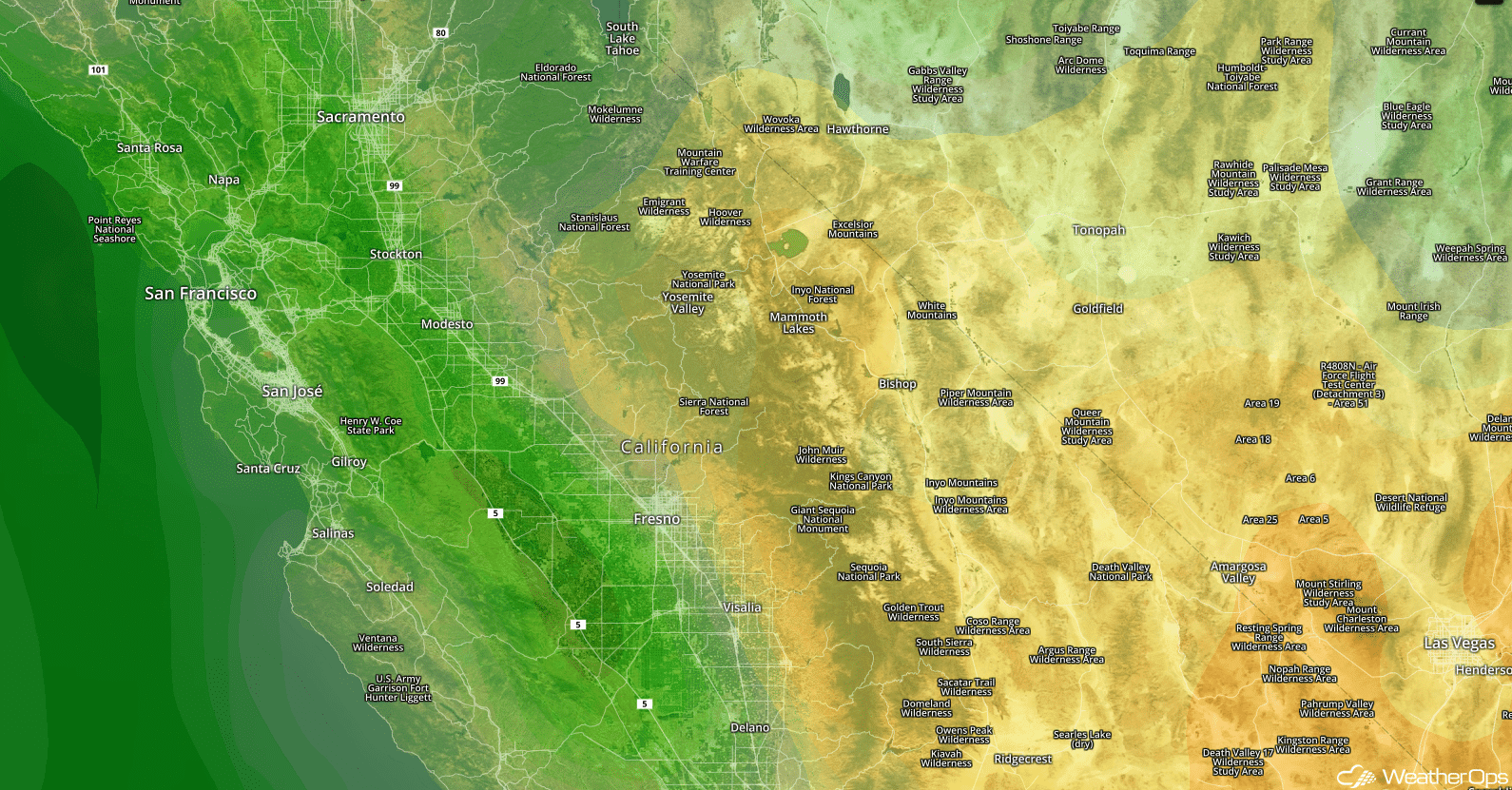 It is most likely not necessary to do anything to the earth in the region. The Atacama Desert, which is the driest non-polar desert in the world, blooms after rainfall. Once moisture is added by rain and mountain streams, the land will heal itself in decades.

The wizards will probably have to maintain the redirected winds forever or somehow create conditions that will effect a permanent change in wind patterns; otherwise, whatever turned the land into desert will do it again. 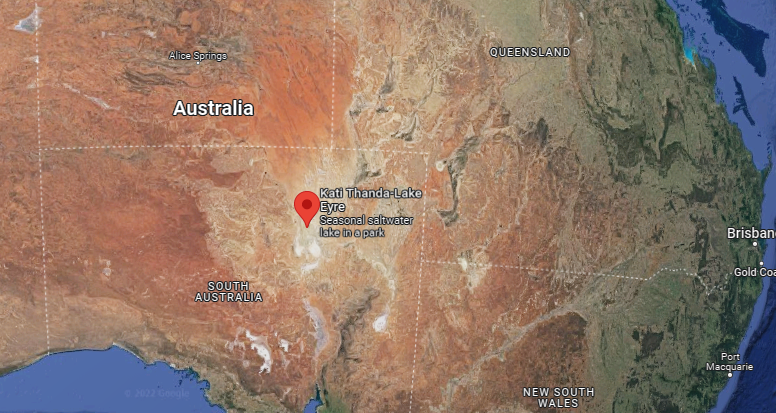 A PLAN TO FILL LAKE EYRE

Your wizards divert rivers. They create a great lake. The lake evaporates and causes rain. Trees and animals move in.

Exactly this has been schemed about for Lake Eyre, including ideas on WB Stack. Even filling the lake with salt water would provide water for evaporation and rain. You have magic so you can make a freshwater lake which will be more fun for water skiing.

Plus a growing lake is simple to wrestle into fiction than getting in the weeds about the minutia of terraforming. I will be the wizard who is mostly interested about when lake monsters can be reintroduced, and brings them back too soon, and then has to go out and take care of them, and then misses doing that when the lake gets big enough that the water monsters can take care of themselves. But they still visit him on the dock sometimes.

Deserts lack one or both of the following. Good soil and plenty of water. Heat, that is most often associated with deserts, and other issues are often only results of desertification, or have influenced the soil or water.

We can see this well with climates. A climate in a region isn't just dictated by heat and rainfall. It is influenced by so much else. Evaporation from plants or how well the water is held in the soil are some big factors. A rain forest is hot and wet. This land can be a hot desert if you remove the plants.

To get things to grow there while only using the magic you need water and soil mages. Add water, have the ground able to hold the water for a long time. Though a fertile soil is required, some plants will be able to grow in this wasteland. Now that water is available and further soil magic is applied so plants habe a good purchase they will grow. Though if you can, have the earth magic make it fertile.

If plants are growing, they attract other life as well as start holding new fertile soil that is blown in or left over from other life. With some effort this can become a self strengthening effect. In short: more water is held by the soil, the soil is better for new plants to grow, fertile soil isn't washed away by water, evaporation of water from the plants makes the area less hot, relatively cool air can cause more rain, less cold at night, more creatures that create a functional biome.

This has been done before. In China one way to fight an expanding desert in the west is to build a 'Green Wall' iirc. One way to do this is planting large square grid patterns of bushes and trees,leaving the inside bare desert. Because they hold water etc. The squares will become green and self sustaining. This often does start with maintenance, but applied to ever growing areas they might be able to create dense forests where there was a barren land.

If your mages apply the ability for more water and more holding of water it can already be enough to create this in fifty years. There's a lot of uncertainties, but it seems they have a lot more power at their disposal than required for this to work. They can add this to recreate lakes, rivers and more for some time (while careful not to wash everything away), as well as having more favourable heat for the desired biome from the start. If they can transform the soil to fertile not dry land it should be a cakewalk. Lastly, they can accelerate this even further by having some people planting more life.

In my opinion it will be very difficult not to have something green at the end of a few decades with such incredibly powerful tools at your disposal.

Not the answer you're looking for? Browse other questions tagged magic environment flora terraforming .

50
How could a group of 6 people destroy an army?
8
How would a half-steppeland, half-desert kingdom with only a single river function?
33
If a patch of desert were magically displaced to the middle of a forest, what would happen to the whole forest after certain periods of time?
8
What sort of habitats could exist Pre-Zanclean Flood which formed the Mediterranean Sea?
1
How to combat magic as science?
8
How long would it take for wildlife to colonize a newly exposed habitat?
5
Living on a Windy Rainless Hemisphere
4
Clothing With Magic In Mind