How can I create a map of an underground city?

This question is, like How long will it take to form a new dialect and language in underground steampunk London?, part of an experiment I'm conducting on Worldbuilding. I'm temporarily switching gears from linguistics to cartography, because an interesting issue has come up.

The setting so far is Victorian London - with a twist. Around the year 1850, massive coal deposits were discovered underneath central London (construction on the London Underground began roughly 15 years before it did in our world, and large-scale excavations started up quickly). Within five years, even larger seams had been found, and it became apparent that London was sitting on top of the largest coal seam discovered to that date.

By the year 1895 - the date of this story - the Underground project has expanded in conjunction with new mining enterprises, and there is effectively a second city underground, populated by workers and their families. I'm not entirely sure how deep it will run - certainly many hundreds and hundreds of feet - but it is quite sprawling.

I'd like to create a map of the city, both to present with any stories taking place there and to use for my own benefit when planning other things out. In a normal city, this would be simple. This city, however, is composed of a sprawling network of tunnels, caverns, holes and other structures, all placed at different depths underground, thanks to a lack of collaboration between mining companies in the early days of the boom.

How can I depict the whole city network in a two-dimensional map - with the technology available to a steampunk world (e.g. no computerized displays)?

I've read the following questions, but I think that they aren't quite sufficient.

Use an isometric projection. 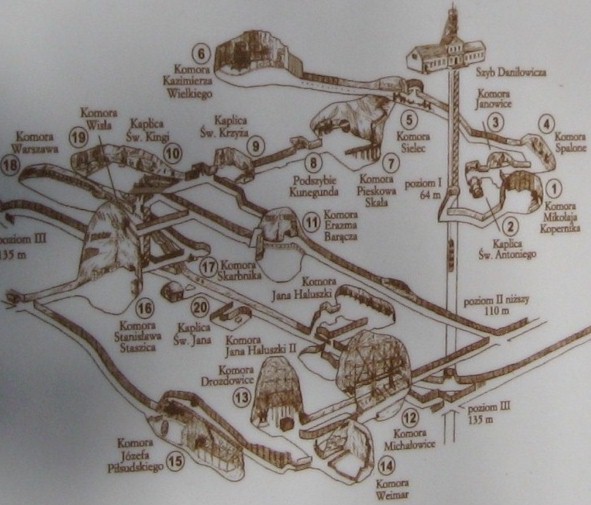 This will let you depict multiple levels and whether tunnels link up with one another or not. This is a map for getting around, not for urban planning or measurements. It lets people get from A to B, but gives about as much perspective about the whole layout as any city map might. People living in cubics might have better non-Khan thinking and better understand the whole city from a map like this.

If they're from the surface, you can draw the city over the top to let them "get a idea of the layout" in reference to the surface city they're more familiar with. 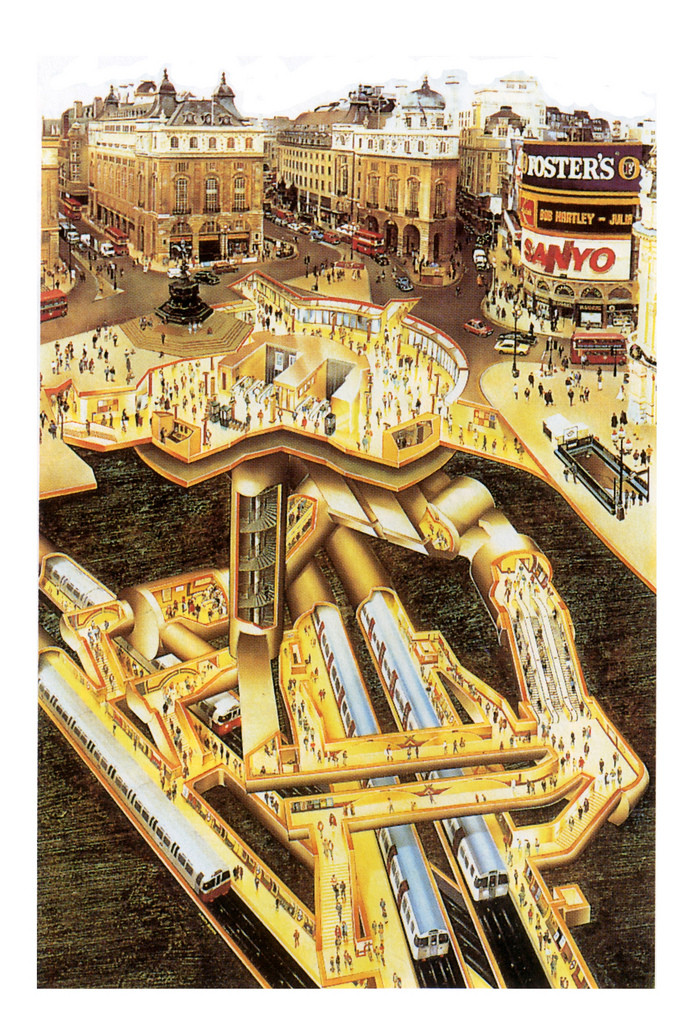 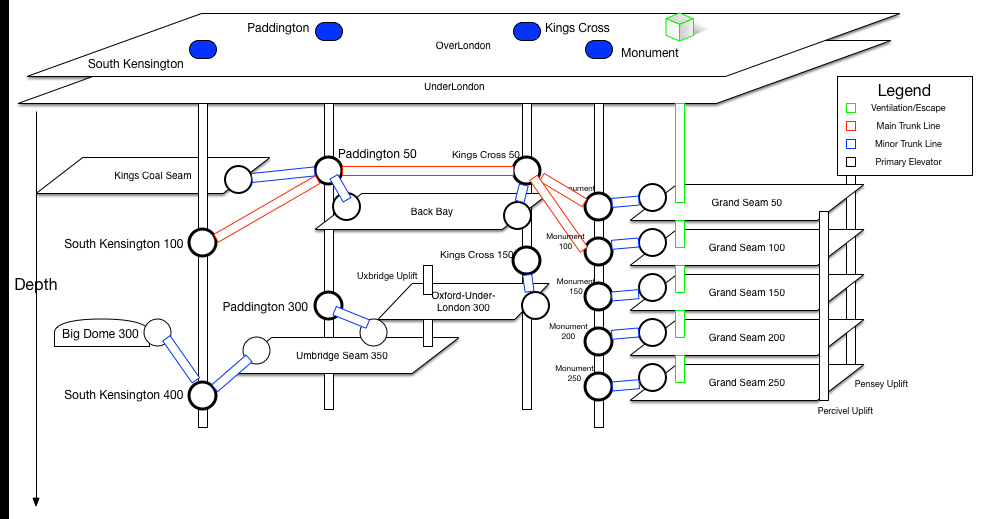 The cartography of such a map as UnderLondon can choose whatever shapes they please to convey the needed information. The above map uses rhomboids to convey a sense of depth but note that Big Dome 300 has a different shape to indicate that it is, in fact, a giant domed cavern. Likewise, the shafts can be shown as thick lines instead of the very long rectangles.

The number at the end of every label is a depth. This helps alleviate the problem of figuring out which parts of the city are higher or lower than another. The above map is made from the perspective of south looking northward. Careful layering or multiple maps might convey a fine-grained sense of which sections of town are further north or south. (Some dimension needs to get flattened and I picked north-south.)

Let's start with historical layouts of coal mines. In 1850, this was the layout of a coal mine in Maryland, USA. 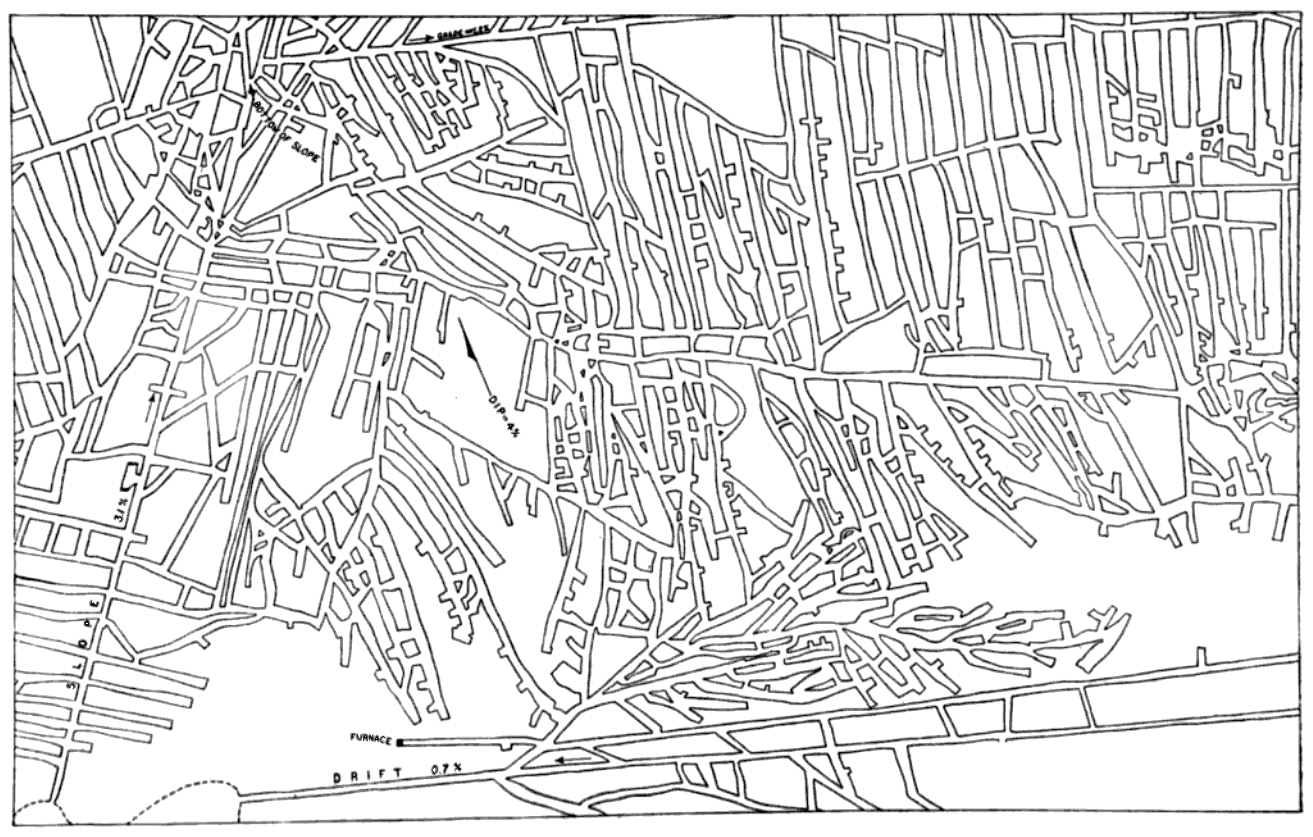 We can see that miners at this time already understood the need to support the overburden with relatively large pillars surrounded by tunnels of extracted coal. Analysis from the source article on mine layout indicates that this particular layout doesn't have any clear ventilation planning which we will need if this underground city is supporting thousands or tens of thousands of people. 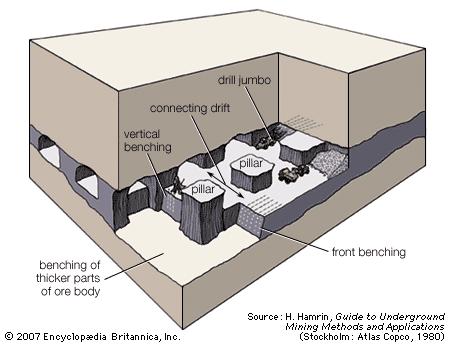 If the sprawling underground city of UnderLondon gets big enough, a map maker ought to include a link to the Chislehurst Caves southeast of London.

Any cavern, of any complexity or size can be described in terms of nodes and edges. Each cavern or intersection can be represented by a node and each tunnel is an edge. Elevators that touch several levels just look like really well connected nodes. Stairs are just parts of tunnels and don't appear on the map unless the stairs are really long.

Start drawing the map from the lowest level. Map out everything in thick black lines.

For higher levels, (closer to the surface) pick a grey color. Eventually as you get closer to surface level, you'll be using almost white ink.

This allows for "layering" and depth of tunnels/structures based on the shade of grey used for that line. Since you've noted a lack of collaboration between mining companies, I suspect that this doesn't have to have extreme accuracy (assuming that it doesn't have to be "this is x meters underground", and "this is about 2 levels deeper than this" is acceptable).

By using a white as you get closer to the surface and drawing the map from the lowest levels up, you ensure that you will be able to see the white on the black. Also, going from top to bottom doesn't make sense since you're covering up previous lines with each level, eventually resulting in being unable to see the levels that were drawn first.

Note that the thickness of the lines is also very important. You'll want to have thicker lines for the lower levels, and thinner lines for the closer to surface tunnels, so that tunnels that run on top of each other can still be drawn properly without completely covering the lowest level.

Note: depending on how deep you go, this is going to be a very convoluted map that would probably be hard to read unless the map was made really big...

Here's what 3 tunnels directly on top of each other, but slightly different angled might look like (Made in Paint).

Here, we can clearly see the 3 distinctions of the tunnels - the black, dark grey, and light grey. Following the logic described previously, this shows that the black line is a single tunnel that is deeper than the dark grey, and the light grey is the closest to the surface. We can see that this method allows for all tunnels to be seen (even when multiple layers are all together - like I said, thickness is an issue and must be super precise)

Here's a picture of what a small section of map could potentially look like: 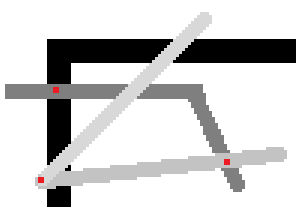 Remember: Other colors or symbols can be substituted out for the greys/red dots. Perhaps this could be a point for your cartographers - some prefer to use circles to mark connections, some like dots, some like colors, some like greys. 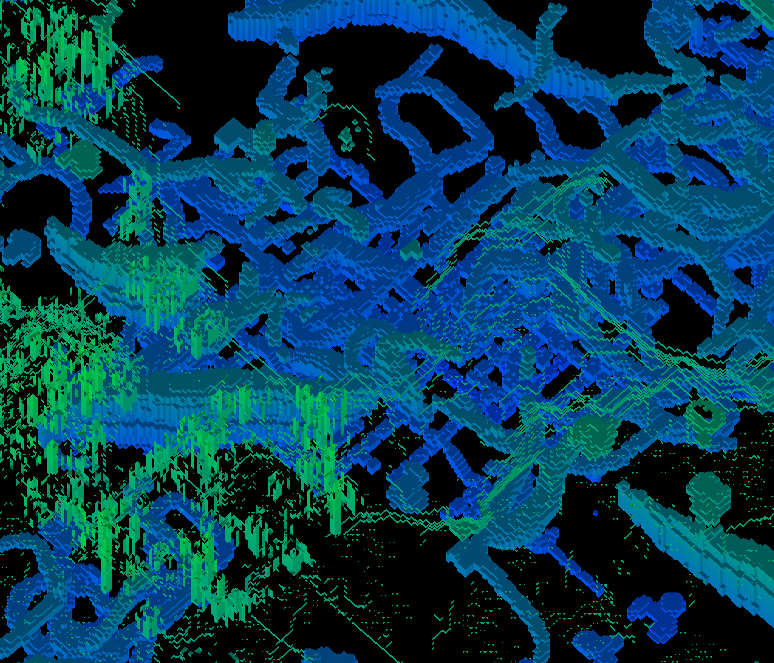 Take a look at the user's map of the London Tube, and compare it with the actual map. The user's map shows the stations and their connections, and those stations are in roughly the right place. This is close to the suggestion by Green (which I upvoted), but it isn't pure graph theory.

Hire an artist. Get them to draw, in perspective, a projected map of the city. It'll end up looking sort of like an isometric projection (as in Samuel's answer), but with sufficient detail, you can show passages going over and under one another, and coming out in the right places. Combine this with cutting away walls and/or ceilings to show the insides of caverns and the like (so you can see the connections), and you've got yourself a map.

Like on real-world maps, use lines that designate a height. Have one line be 0 feet elevation, the next -10f, -20f, -30f etc. They should be drawn in a conspicuous color, and should go over the parts of the underground network that are at that height.

Take your isometric artistic project from the first point, combine it with contours from the second, and you'll have an easy to understand map of the underground which clearly demarcates the elevations it's all built at.

A couple of possibilities - either colour code outlines by depth (like aify's shades of gray idea, but using outlines rather than filled shapes (and maybe colour rather than grays). That way if you have two corridors/rooms over each other, you can just use concentric outlines so you can still see both.

The other possibility is to use stereo cards and a stereoscope for a true 3D view (from a fixed viewpoint). They were popular in Victorian times, around the 1850s, so they're certainly appropriate technology. (for some examples of how these work and some 1850s-1860s stereograms, have a look at the London Stereoscopic Company website (http://www.londonstereo.com) - you can see a couple of modern versions of stereoscopes, and the A Village lost and found and diableries are examples of 1850-1860s material.

As well as photographing things, you could also draw them (though that would take some skill).

For use without a stereoscope, you could probably also use red/cyan anaglyphs - where the images for left and right eyes are printed on top of each other, one using red ink, the other cyan, and viewed using the old style 3d glasses with one side red and the other cyan - the idea being to block the view of the "other side" image for each eye.

Lenticular 3d cards use cylindrical plastic lenses - patented in 1936, they're probably too modern (and use plastics) for an 1850s setup.

Not the answer you're looking for? Browse other questions tagged cities map-making underground steampunk .

34
How can I indicate a third dimension on a map of outer space?
39
Mapping a fantasy/horror building where rooms overlap
14
How long will it take to form a new dialect and language in underground steampunk London?
3
Graphically represent (map) multiple spatial dimentions