Evolution of flying animals on a windy planet

I'm thinking about the evolution of flight on a tidally locked planet where winds normally are 70 km/h (45 km/h) and can easily reach 120 km/h (75 mph). I've recently asked about clothes humans wear in this environment, so I asume there must be humans, which implies the existence of other mammals and terrestrial animals. But what about avian life?

Birds evolved flight to get from tree to tree, but this planet has a tundra-like ecosystem with no big, tall trees or forests of any kind. What's more, the permanent winds on the planet are strong enough to hinder land travel for terrestrial animals. So, with lack of trees and excess of wind, could flight have developed on this planet? If so, what kind of flying/gliding animal could live and thrive on this windy planet?

I'm thinking of possible flying animals. Birds are probably out of the question, but some gliding animals could do fine in this environment. Maybe taking advantage of air currents for faster travel or hunting, but without giving up on walking as their principal mean of locomotion.

On the other hand, I'm also thinking that in this windy environment, weighing more could be an evolutionary advantage. Small and light animals that could have evolved flight would have been wind swept and became extinct much before of having actually been capable of flying. Flight is actually useful, but all the steps in between are not so much.

All in all, animals always make the most of their habitat and I think for sure they would adapt to these circumstances and even use them in their benefit. So I would like to know what you think about this, and please tell me if something is not clear. Thank you very much!

In real world, foraging seabirds like red-footed boobies and great frigatebirds can give an idea. These birds are one of the most well-adapted to windy and gusty weather conditions and areas. Frigatebirds can soar for weeks without stopping because they can't land on water and they have the highest ratio of wing surface area compared with body weight (lowest wing loading). These seabirds also have strategies to avoid cyclones/hurricanes by following wind patterns or by climbing to high altitudes to bypass high speeds. 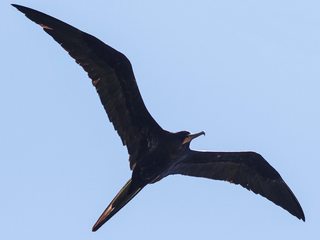 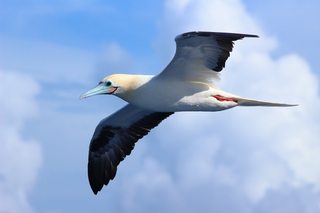 For further details, there is a scientific study/publication about their cyclone avoidance behavior and their strategies in windy conditions. Here is some relevant excerpt:

Boobies generally fly close to the surface, but during the cyclonic event, the three adults escaping the cyclone regularly climbed to high altitudes, reaching 1100â€‰m for one bird, before returning close to the sea surface. This behaviour was not related to gale winds in particular, but there was a tendency for birds to fly at a high altitude with strong winds.

When flying under gale conditions, birds of both species use wind differently compared to when they travel with weaker winds. When flying in the presence of weak winds, both species preferentially fly with a tail wind and to a lower extent with a side wind when the wind force increases. Under gale wind conditions, both species use only side winds. Frigatebirds, which are continuously climbing by soaring and descending by gliding at an average altitude of 100â€“200â€‰m, climb to higher altitudes during gale winds and stay at a high altitude, where they attain very high travel speeds.

Flight evolution on such a planet would be born from a novel (to Earth) approach: the kite. You don't have to climb to the top of a tree and glide down on this world.

You just get caught by it and oof you're up in the air. Evolution would catch onto this, and start adapting surfaces into little extensible kite limbs so that the creatures could launch. Pretty dramatic way to escape predators (unless they can do the same).

From there, they'd adapt different surfaces so that they could steer themselves, and it starts turning into something that resembles proper flight more closely. But they're never going to flap wings like on Earth. What would be the point, when the atmosphere delivers most or all of the power they'd need to stay aloft? Instead, you'll likely see adaptations where the organism can puff itself out like a pufferfish, only to instantly shrink back down when it wants to go into a dive (though, even in that mode they'll have some need to steer themselves).

These things will look weird, like something out of a pokemon cartoon or the Kirby video games.

The flight evolution probably would have come from a carnivorous species that needed to attack by stealth. With those winds, you can probably have a flying squirrel analog that jumps, flaps out and gets pulled up into the air above the wind (assuming the wind is low to surface level wind and not massive gulf streams) and then glide, spot target, dive, grab the prey, and flaps out to soften the landing. Though the winds would pick of an avian creature with hollow bones, your could make your flying squirrel analog have really dense bones and a small surface area (with the flaps tucked). You would also want a 2 stage flap deployment to allow a moderate amount to catch the wind and slow them down (but not achieve lift off), and another deployment that shoots them up with the wind.

Not the answer you're looking for? Browse other questions tagged evolution fauna flight wind .

17
Clothing against the wind

19
How does gravity affect evolution of life?
4
How can you reduce the effect of wind speed through environment or evolution?
5
Living on a Giant Tree - Animals
12
Drive to develop flying machines
11
Viability of Scansoriopterygid wyverns
4
How could a plant harness kinetic energy?
5
Evolution of flying skulls?
3
Pack animal (land) that can travel long distance on windy planet
3
Creature design - low gravity high atmospheric density world
4
What would be the physical characteristics of a sapient, mountain-adapted, gliding mammal capable of magically producing thrust?