How can a creature have an efficient bird like respiratory system without hollow bones?

Upright; no tail. This is a creature that requires a more efficient respiratory system for longer intense physical activity. But it needs strong bones like mammals have. Bird air sacs extend into the bones, though, which would probably weaken the bones. It does not fly. By bird system efficiency I'm referring to the fact that birds have air constantly moving through the lungs, unlike mammals that have a pause between fresh air. 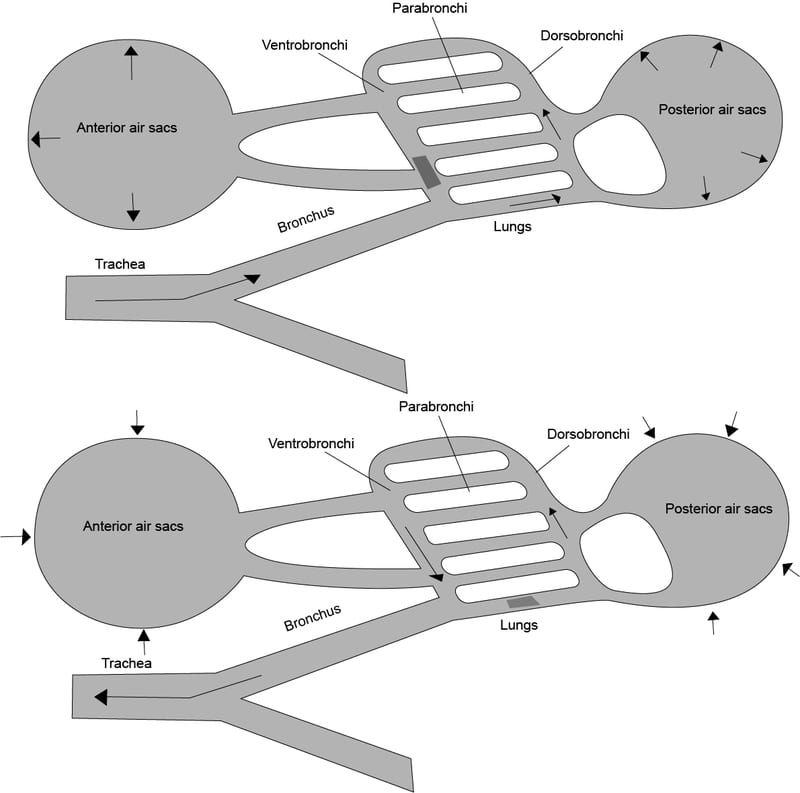 Can this creature have an efficient bird like respiratory system without having the air sacs needing to extend into hollow bones(pneumatic)?

biology creature-design
Share
Improve this question
edited May 19 at 17:28
Chickenpeep
asked May 18 at 20:26

air sacs evolved before hollow bones, pneumatic bones is just a useful extra thing you can do with air sacs once you have them, (you can make bone stiffer). pneumatic bone is not necessary for functional air sacs, most air sacs are not even in bone but in the body cavity.

see the six big air sacs in this image here, they are in the body cavity not bone.

you can see it in air sacs casts, in B the light green portion (LVD and CV) is the only portion actually inside bone. 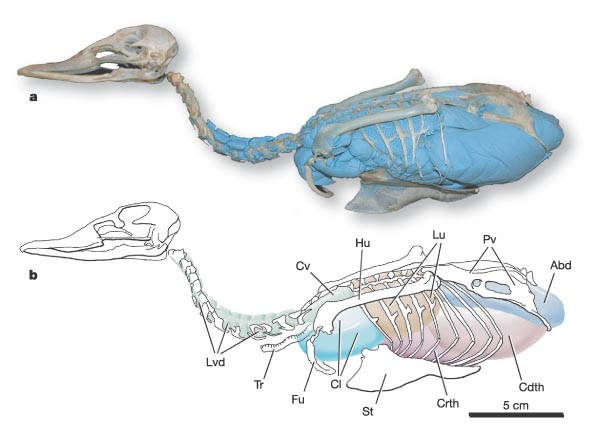 Air sacs evolved outside bone, but get moved into bone fairly quickly evolutionarily because it has several benefits (stiffer lighter bones for a given size for a start) but it is not needed for the air sacs to work.

You may want to check this out (http://people.eku.edu/ritchisong/birdrespiration.html)

The main advantage of the avian respiratory system over the mammalian one is that the airflow is unidirectional. This is a huge advantage for oxygen transfer, but it's a challenge to get there evolutionarily from a bidirectional lung system. Birds got there, mammals haven't.

There's another example of the same limitations of bidirectionality in systems. Many more primitive animals like cnidarians have a blind gut -- their digestive system is bidirectional in the same way that mammalian lungs are bidrectional. This isn't ideal -- to the extent that the formation of the gut happens remarkably early in most embryos of more advanced animals. Evolution "decided" that a unidirectional gut was the only solution to this problem for most animals.

It's perfectly reasonable to describe an avian-style respiratory system where the air sacs are discrete structures in the body, separate from bones. But the avian system has only gone most of the way towards unidirectionality -- quite a bit of its complexity is around allowing unidirectional flow over oxygen transfer surfaces while still using the same upper respiratory system for both inhaling and exhaling. If you want to describe an even more efficient system, and are not constrained by "easy" paths from current mammalian biology, a two-orifice unidirectional respiratory system fits the bill. A single lung for oxygen transfer (more if desired for redundancy), a single inhalation port, a single exhaust port, and either a peristaltic or heart-style chambered pump to push the air in one direction.

There's more than one solution possible here, of course; but this shows there's at least one viable path, which means that there's a way forward here. The evolutionary history of your creature (if any) might determine the details.

A bird's respiratory system is about 8x as powerful as ours, but not 8x as effecent.

So what all of this tells us is that the efficiency you see come directly out of pneumatic bones in terms of respiration is that it allows you to reduce the needed weight and body cavity space of your respiratory system by ~25%. Everything else that is beneficial about a bird's respiratory system either does not contribute directly to respiration efficiency or it could be easily replicated just by making lungs bigger, have more surface area, or by using air sacs purely inside the body cavity.

Solution: Give them a higher Myoglobin based Oxygen Intake Mechanism

All this said, both mammals and birds tend towards hemoglobin based oxygen intake. Most animals prefer hemoglobin because it forms weaker oxygen bonds than myoglobin making it require less energy to release the oxygen when needed. However, the stronger bonding force of myoglobin means you can uptake oxygen several times more quickly and completely. In fact, some mammals have been shown to boost how much myoglobin they use for oxygen transport and absorption when injured, living at higher altitudes, or requiring a more energetic lifestyle to help compensate for higher oxygen needs; so, the mechanism required is already in place. You just need to activate it.

While hemoglobin only allows animals to absorbs ~15% of the oxygen it breaths in, mammals which use primarily myoglobin based intake (like Whales) are able to absorb up 90% of the oxygen they inhale. So, by increasing your myoglobin dependence by just a little bit, you can increase your oxygen intake by 25% to compensate for not using pneumatic bones as part of your respiratory system. In fact, if you were to switch to a purely myoglobin based exchange system, and increase the surface area of your lungs to the same density as a bird's you could achieve the same total oxygen exchange as a bird gets without even needing to make your lungs any bigger.

Other reasons to favor pneumatic bones.

The big downside, and thus the reason most organisms don't do this, is that it will take more calories to release the oxygen when needed. While inefficient calorie use is normally selected against, your creatures may be in a situation where they are genetically engineered and/or fulfill a niche where the extra calorie needs are not a major constraint.

Furthermore, most terrestrial body plans would overheat using this kind of respiratory system. Part of what a bird uses its pneumatic bones for is temperature control. Burning more oxygen means more body heat; so, birds use these bones as heat sinks to help remove this extra heat from their bodies.

So, if you are going for a body plan that prefers solid bones, you should consider that your organism may need to live in a colder environment, and/or have specialized structures that act as heat sinks like an elephant's ears or a bat's wings.

2
The Reindeer--Let's Get Real, Shall We?
8
Adaptations of a Very Specific Dragon to this Combination of Large Size and Flight
22
How to increase the efficiency of lungs
26
Would this biological cooling system work?
4
How could work a functional secondary respiration system ("Universal" respiration/lungs) at terrestrial and active creatures?
6
Would dragons be able to purr?
3
Could this idea for an anatomically functional merfolk "sound" plausible?
6
How could an efficient respiratory system evolve for giant arthropods?
2
How large of a feather "parachute" would these flightless birds need to fall safely?