How might navies and maritime trade have evolved around a Pangaea-like landmass?

So I was thinking about the possibility of a Pangaea like landmass in a secondary world setting. Assuming more or less historical technology and humans, how would the concept of a navy and maritime trade evolve in a world in which nearly all major nations are attached to the same landmass?

While the sea would still be a valuable means of trade in the early days, would it still be as valuable once railroads could be developed across the landmass itself?

Similarly, would naval power really have all that much value if nations can just attack each other over land?

geography military nautical
Share
Improve this question
asked May 13 at 5:06

For most of its history, sailing has been limited to the proximity of the coast: in such a scenario, the starting point and the early development will be the same. True, Polinesians have spread through the Pacific and that's not exactly coast sailing, but once they settled on the islands they did not start trading networks across the oceans.

Even though railways might be available, navigation can still be advantageous: think of a gulf or a fjord: crossing it with a ship can be competitive, cost-wise and time-wise, with going around its coastline in another way.

The Age of Big Ships:

Paradoxically, such a world might drive the construction of bigger and faster ships. Trade will still be vitally important on your world. Pangea was far from a round ball, with lots of ins and outs. Shipping by water will be critical. But with a big mass of land between destinations (with no narrow points for easy overland trade), there will more, not less pressure to ship long distances.

The same pressures that led to the construction of Clipper ships would be at play on your world. To get between distant locations, you need ships that travel long distances. Forces that let you do this faster, with more cargo and less crew will increase the pressure to have clipper-like ships.

Inland, you'll still have to deal with mountains, deserts, great rivers and hostile nations. Long-distance rail shipping is still not going to be as cheap as ships.

You may have a greater drive in the age of rails to develop shipping containers, speeding the transition of ship-to-rail and back, since fewer destinations can be directly reached by trucks and wagons from ports.

Finally, there might be a higher emphasis on developing products that can tolerate long ocean voyages (or slow transits across the land). For example, India pale ale was specifically formulated to survive the voyage from England to India. 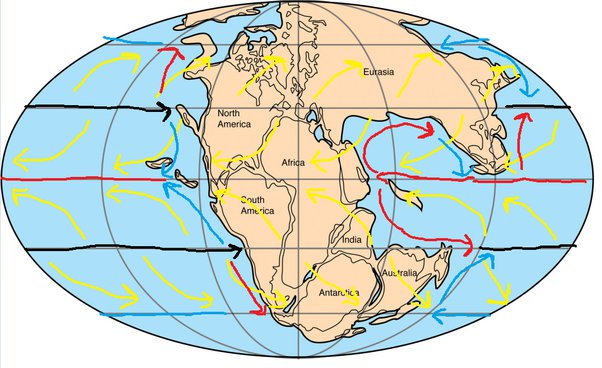 After looking over maps of Pangea, isotopic rain fall estimates and mountain ranges. It's easy to see that a robust maritime presence would actually flourish.

Especially in the relatively shallow Paleo-Tethys Ocean where it is cradled within the super continent. Early "shoreline" traffic would be likely if we compared the area to geographic present day Mediterranean, or Indonesian waters that it resembles.

Great deserts bordering the equatorial tropical region accompanied by their mountain ranges, would hamper railroads, and overland trade. Though in time that would be overcome it's doubtful that would seriously threaten the dominance of sea trade. As in any society today, populations have always gathered on water. I see no reason they would not on a Pangea content.

With populations, come the need for trade, trade requires infrastructure, infrastructure requires protection and becomes strategic. Those populations would be on the coastlines. Navies would be just as essential as they are today. As I stated before the great north and south deserts would be formidable barriers for quite some time, there is evidence of a tropical region dividing the two that would be quite inhospitable for most of the year as well.

I do realise the OP stated "Pangaea like landmass". How similar isn't stated so have based my answer on Pangea itself. Geographical conditions my sway any answer one way or the other. And depending on how the geographay is formed it can disfavor sea travel greatly. In the end however, the same conditions apply. Populations will center on coastlines, then spread inland. There, in all likelihood, will be a northern and southern desert bordering a tropical wet summer monsoon like area on the equator that will greatly inhibit transit. And the best way to get around will still rely heavily on the waters.

As for the rest of the water world, there would be little reason to travel there, unless there were more shallows there to encourage gathering of life for fishing etc. One could imagine great industrial ships semi-permanently out to sea in far distant oceans servicing fishing fleets. Like mobile boom towns on the water.

A 190 ton Blue Whale's weight is 20% bone, this leaves us with 152 tons of blubber and muscle plus assorted guts and organs. Enough for 100,000 meals? Perhaps more. Other whales are smaller, but still constitute larders with fins.

I don't suppose that I need to go into fish value, a good hold full of assorted fish could weigh in at tens of tons, even for a medieval boat. To feed a large city on the coast, it'll definitely be worth protecting. (Salt for preservative.) Also see: Cod Wars

Then there's the sea-bed, flatfish, crustaceans and assorted molluscs are sure to be a delicacy for the scarcity caused by the difficulty of obtaining them (snagging nets on rocks etc..). Once fished-out, new beds must be found or poached.

It goes without saying that since the sea and sea-bed vary in their bounty for several reasons (eg. continental shelf width/depth, warmth of currents - like the Gulf-stream) that good waters are going to be in demand - and worth a lot to whoever owns them - and to whoever wants to poach from them. Having a stout navy seems the obvious solution both for individual stray boats and organised invasions of fishermen with their eyes on the main chance.

The impact will vary through the history of this world

By modern era, this world would feature many ships that are larger than our Earth's ships and better suited for long journeys.

I don't think you have to look much further than current earth. Asia-Europe-Africa are already kinda as big as a super continent, and look at how much rail transport there is between China and europe. Answer : not much, if at all. Most of it goes through container ship. The Suez canal help obviously, but even without it would still be worth it.

The only thing that could prevent it would be difficult navigation. If your continent extend way north and south, it could be blocked by iceberg. Or maybe there could be some constant storm somewhere along the way. Note that it could lead to a mix ship / railway. Instead of using railway deep in the continent, ship to a place like panama pre canal, railway to the other side, board ship again.

I don't think it would be all that different from our world.

Sure, it would in theory be possible to take an overland route from any place to any other place. But that route is not necessarily safe and convenient. Maybe the terrain is covered by mountains or dense jungle that makes it too difficult to build a road or railroad. Maybe there is a road, but it's a popular hangout for highway robbers or hostile enemy soldiers. Or maybe the coastline just has a concave shape with a bunch of peninsulas and inlets so that a water route is just plain shorter. (Analogous to a Morocco-to-Spain traveler in our world taking a ferry across the Strait of Gibraltar instead of taking the long way around the Levant and Black Sea coast.) So there would still be justification for transporting people and goods by ship.

And offshore resources would still be a thing: Fish, whales, shellfish, oyster pearls. Perhaps most importantly, oil and gas fields. People and countries would want access to these things. Having a coastline may be even more valuable than in our world, because there's simply less coast in the world.

The main point of difference is that, once shipbuilding and navigation has advantaged to the point to make an Age of Exploration possible, someone wannabe Magellan is going to set out to answer the age-old question “What's on the other side of the world?”, and return to Pangaea with the disappointing answer of “nothing”. With no “New World”, there are no massive colonial empires like the Spanish or British had in ours. As such, blue-water navies don't have much of a reason to exist, and military vessels generally stick close to home defending coasts or rivers.

How could be a Pangea with a land area similar to the total area of emerged land we have today? The perimeter and therefore the coast of such land would be smaller. Less space for the rivers to outflow in the sea. There could also be less mountain if the tectonic plates were side by side with less overlaps. This would result in a land with long and wide rivers. and a lot of marshland.

Since history begun until the invention of the railway transport by boat was the most efficient one and often even the fastest. I can bet that a route going via one river, the sea and another river would be faster that the direct route through the marshes. But that's not the only case, sometime a long route might be needed to go around hostile peoples or other obstacles. So maritime trade is absolutely possible.

Once you have maritime trade you also have piracy and a navy to defend from the pirates. In theory you could reach the pirate bases by land, but the pirates could have some impassable fortifications on the land side of their cities. Or the pirates could be smart enough to cover their traces, with many city states that would be easy and without a navy the traders could not understand where the attacks come from.

Not the answer you're looking for? Browse other questions tagged geography military nautical .

31
If I build a railroad around the edge of a supercontinent, will that kill the oceangoing shipping industry?

7
How a giant floating landmass might affect the weather?
13
How would medieval/Renaissance-era castles protect themselves from air raids?
8
How to adapt premodern warfare to area-of-effect magic?
8
How to have a landmass the size of Great Britain have almost every single climate
2
How might you design a modern military like Starfleet?
9
What would it have taken for navies to control air forces historically?
2
Plausibility of tank-borne infantry in a world with very short sight ranges and rare, awful radios
3
How would an Army assign troops to units?