a chemical component in vampire saliva to assist with feeding

I've been thinking about vampires lately, and I came up with the idea of a vampire's saliva containing some sort of chemical or hormone that assists with feeding. I think it would probably have to do something with controlling blood flow and/or pulse, although I'm not sure if it would want to speed it up to feed more or slow it down after feeding in order to keep the victim drowsy and from bleeding out in order to allow the vampire time to get away.

I'm no biologist, and I need help with what substance that would be. I'd like it to be decently realistic, but I'm willing to fudge a few details on how it would get into the victim's system, how the vampire would produce it, or what the exact effects of it would be. If you could mention potential side effects of it as well so I can get a clearer image of how to treat vampiric victims, that would be excellent, thank you! 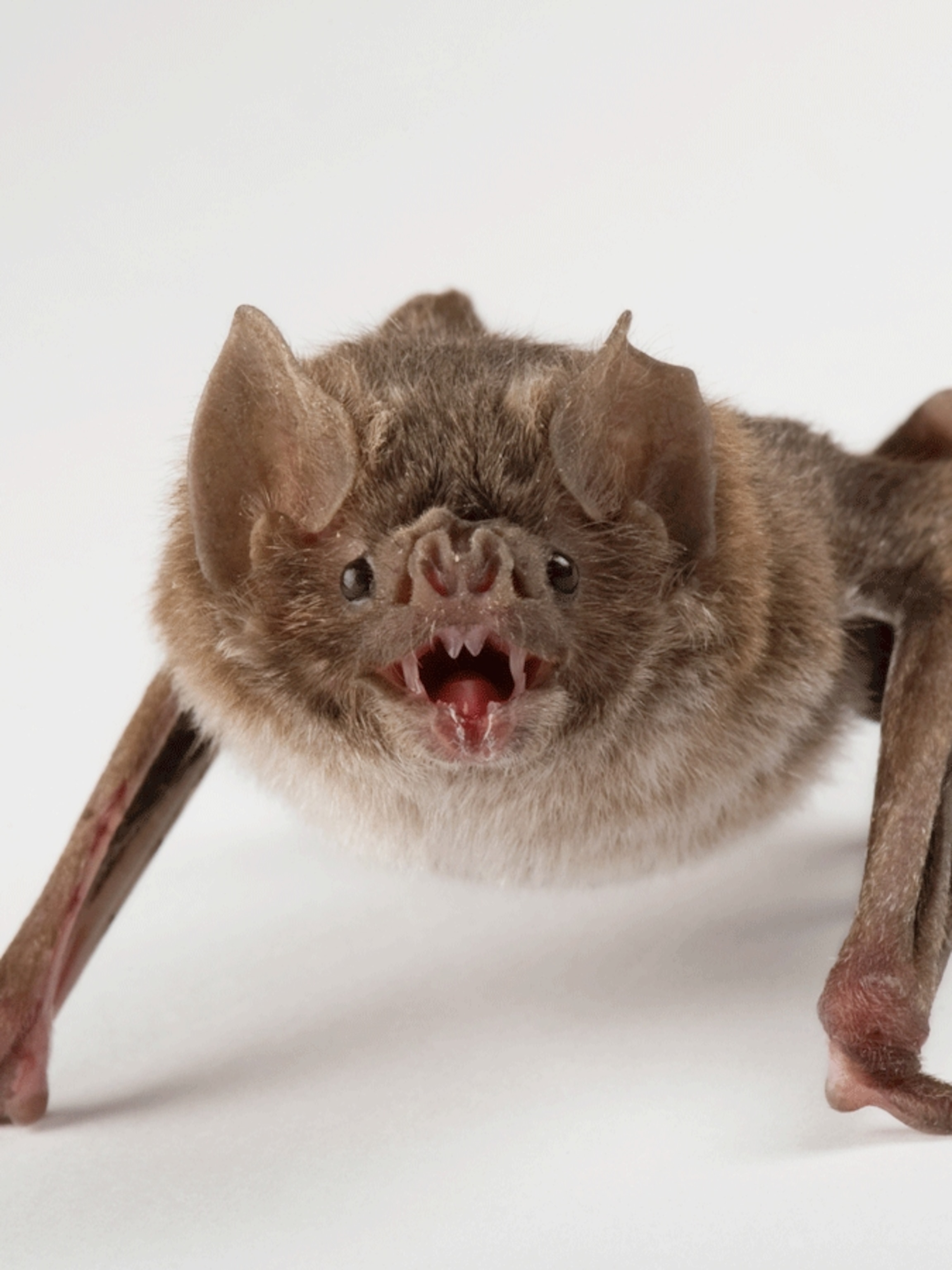 The lovely little critter depicted above is known as Desmodus rotundus, or the common vampire bat. They are strictly hematophagous, meaning they feed exclusively on blood. To be able to engage in such a diet, they have a series of adaptations to their digestive system, with our focus here being their mouth, teeth and saliva.

Vampire bats are small bats that feed predominantly on large mammals. To begin their feeding, they use their special heat sensing organs to find blood vessels closer to the skin. Once they found a proper one, they use their sharp incisors to make a small cut, lapping up the blood that flows out. Their saliva has a series of different components that aid in this feeding, including anesthetics that keep the cut from being noticed and several chemicals meant to promote anticoagulation and vasodilation, meaning the bloodvessels widen up allowing for more blood to flow and that the body's ability to create blood clots to stop bleeding is severely hindered for a while. Among these various agents is draculin, an anticoagulant used by us in some types of medication.

Essentially, your vampires should follow very similar steps to these wonderful little creatures. If they also feed on sleeping prey, they want the blood to flow, but the prey must be asleep. That means that instead of altering the heart rate itself, it's best to have a saliva that will prevent them from feeling pain while ensuring that the wounds stay open and the blood flows uninhibited. Proteins and chemicals that reduce blood thickness, anticoagulants and vasodilators are what you want, along with obviously anesthetic agents to keep them from feeling pain.

It should also be noted that, much like vampire bats, your vampires do not want to have debilitating effects on prey, at least no more than necessary. Truth is that no parasite benefits from being potentially life threatening to their host. They want the host to be well so they can also be well, and this applies here.

There's no major worries about how they produce it, the components are just naturally present in their saliva and we have real life examples of creatures that work almost exactly like your vamps, no big deal (snakes had their venom come from modified saliva, you're clear here). As for how they'd get into the system it's again no biggie, they bite the target and their saliva is in constant contact with the blood, it gets into the body / is absorbed by the skin and done.

As for side effects, unless they're using something way off of what we normally have, the biggest side effects of a vampire meal should normally be a new cut in the skin, a sense of weakness with a potential case of anemia and maybe some swelling due to an allergic reaction as well as a new illness transmitted by an eventual sick vampire (vampire bats can and do sometimes spread rabies as they're still vulnerable to this disease despite their surprisingly tough immune systems).

Some other things your vampires would benefit from:

Essentially, nature has done most of the work for you already. You could easily make your vampires as sapient, more humanoid versions of a common vampire bat, and your biggest worries about fudging stuff would be mostly related to their dietary needs rather than how they get their food to begin with, because brains like ours are VERY expensive to maintain in terms of energy cost, and despite being larger and with a slower metabolism as a consequence, your vampires would realistically still need to completely drain the blood of several humans or a couple of livestock each night just to keep their bodies up and running adequately, meaning it'd be very easy to identify a vampire presence nearby due to the sheer number of people and/or livestock dying of severe blood loss in the span of a couple nights.

Also don't pierce your prey's arteries or major blood vessels unless you want to kill them, cause that's a wound you don't cause unless the plan is to ensure the prey bleeds out regardless of whether or no you can make use of all the blood that's currently spilling out of where it's never meant to leave.

Not the answer you're looking for? Browse other questions tagged biology fantasy-races food vampires .

94
Why would vampires be incapable of entering a non-vampire human’s house uninvited?
1
Need help with details concerning non-conventional sci fi vampires
0
Realistic (sci-fi) ideas on how biological mind control could be possible through a virus infecting a person?
23
Where could a vampire get blood without harming people?
8
What would cause vampires to become aroused when feeding?
8
If a scientist were to compare the blood of a human and a vampire, what would be the difference (if any)?
6
How Can Vampires Obtain Donors?
2
Hiding Vampires In Plain Sight
1
Loopholes of Imperi
5
Could a "vampire restaurant" be logistically feasible?