The Emperor's Coffee House - how to build a neolithic steam engine?

This is a thought experiment that I had for a long time, and I would like to know if it is possible/feasible. Let's assume that we have a very powerful ancient emperor, who has an idea to harness the power of steam. The predications we are working from:

We will need the following parts:

A boiler, that can withstand high pressures, and can be refilled with water.

I have seen pressure cookers made of clay, so I suspect this can be used. I don't know if there is a practical limit to the thickness of clay pots, they can be probably made as thick as bricks.

Alternatively, a block of stone can be hollowed out - this would be harder to handle.

A valve that can be manually released, or automatically releases after a certain pressure is reached.

My first idea was a leather balloon/tube, that has a weight on it. When it builds up enough pressure, it lifts the weight, and that releases excess pressure in a kind of self-regulating manner. Basically imagine a garden hose with a block of stone on top of it. Instead of leather, it could be made from intestines, as those were succesfully used in airships. Maybe there is a kind of fabric feasible too? Here is a quick sketch with MS Paint:

The other idea is to have another hollow stone (or even a pre-existing stone chamber can be used) with one exit on the top, that has a heavy plug in it. Similarly, given enough pressure, the plug is lifted. It can even be housed in a tubular structure, making a primitive "piston".

If we are going with clay pots, and leather bags, the top of the pots can be notched, and we can tie the leather tube on it with minimal leakage. Connecting stone parts is a bit trickier - we need to make surfaces that are flush with each other, and don't leak (too much) pressure). If we have a less than ideal fit, we might want to put the vessel containing the water at an angle, so the steam building up doesn't knock it off. Then a pressure chamber, with all the devices can be fitted on top. Another sketch: 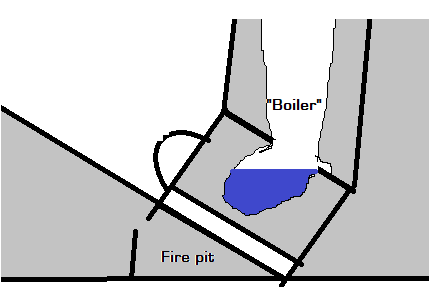 If this works, and produces steam as desired, the only question left is to how to harness it. I imagine pushrods and wheels would work just fine if made from wood, and a coffee filter can be made from clay, or even some fabric.

science-based reality-check stoneage stone
Share
Improve this question
edited May 9 at 17:53
Sonko
asked May 9 at 16:44

Building a pressure vessel out of stone would be workable. The Romans actually made aqueducts that could survive up to 300psi, which is the top-end for the boiler on locomotives. You'd need a really big fire to heat it, but once hot, it would stay hot for a long time.

To feed water into it, let's keep with the Roman model and have water fed in through a siphon that maintains more pressure than the boiler itself does. The problem here is that it would be much easier to convert the water pressure directly into mechanical energy, but you wanted a steam engine, so I'll keep going on that track.

Now you have to turn that pressure into mechanical energy. Your idea of a leather bag is unworkable. Consider your standard automobile tire, industrial rubber, that will generally blow at a mere 60psi. Leather would have no chance. One possibility would be to have a stone piston chamber, polished smooth, and then a wooden piston sealed with resin. If you could figure out how to prevent the resin from sticking to the stone, you could cast the resin plug on top of the wooden piston while it was in the chamber. That would theoretically produce mechanical energy that could be transferred to a mechanism of your choice.

The real problem with all of this is that you either have to let everything cool in order to refill the boiler, or already have water pressure that you could convert much more easily to mechanical energy. In order to refill the boiler, you'd have the same issue with sealing the fill point. The pre-rubber answers to this aren't heat resistant (and neither is leather), and the pre-metal answers are too heavy and thick.

So, maybe, but you'd have to get really clever, and there are probably easier ways to go about it.

This is interesting question. A lot of times we forget that the first steam engines were not for locomotives but for doing simple repetitive things like pumping water out of mine shafts, or hammering, or pounding on stuff like ore, or hot metal to be forged. Like the invention of waterwheels, once you have a motive source, you could go a few different directions. With water wheels, granted in a different era, you can have the principle mover, but then turns and moves other stuff.

Given that you have neolithic society and we now know that very large stone structure that must have requires extensive cooperation have been build, for example Göbekli Tepe and stone circles like Stonehenge. Also while not everywhere, neolithic peoples would know about hot springs, geysers and other sources of geothermal heating. Using the geothermal heating, poses a different set of problems but gets away from the society having to discover coal, or the logistical issues of having gather wood and burn stuff.

So perhaps there some bright neolithic guy or gal who realizes that they can plug some geothermal water source at one end of a big stone lever with some sort of fulcrum so it would rise and fall. Then as time goes on perhaps figure out other ways to optimize and use the motion.

Take the stomach of an erbivore, encase it in a wooden or stone box.

Fill the stomach with water, and put some stones into a fire until they become hot.

Place the hot stones into the stomach and close it with bowels of the same animal.

The heat from the stones will boil the water and make the internal pressure rise.

When you cut the stomach open or loosen the bowels the pressure will be released.

Not the answer you're looking for? Browse other questions tagged science-based reality-check stoneage stone .

14
What would a steam locomotive look like if steam power became yet again the main type used in rail transportation?
13
How tall can you build a mountain chain of bricks?
11
Ancient Roman Pneumatic tube Postal Service
1
Stone-age air-force
3
Human-leather Armor: Effective and Practical?
8
Can transistors be made in the stone age? (Spoiler: Dr.Stone)
6
Using pre-steam technology how can a large bore tunnel be used to drain a lake from below?
10
What pressure, temperature and atmospheric challenges exist for human habitation 1 mile beneath the surface of the earth?
29
Would gears made of stone work?
6
Do they skip the steam engine?