A mainly barren world with two moons and a shared ring. Is it feasible?

I am creating this planet which is mainly barren and desert around the equator, but towards the poles there are huge mountains with glaciers and frosts. There is not much sea around. The inhabitants are humanoids with very strong animal characteristics, in a society that the jungle law applies (survival of the strongest, tribes, etc.). So, I consider having two moons, one smaller and one quite large, mainly to be used as a metaphor, showcasing the society's inequalities, their sudden and violent mood swings and their unpredictable nature, thinking also that two moons could affect their behaviors in such ways.

So, my first question is if my thinking makes sense from a scientific point of view? The existence of two moons can be aligned with my planet's geography, i.e. a mainly desert planet, with few oceans - that are considered as extremely dangerous and some very few but very big frozen mountain near the poles? Two moons could affect behaviors, right?

My second question is if it is possible (scientifically again), the two moons to share the same ring - in an "infinity/mobius strip" shape maybe? I would really like to use it as another metaphor for the inter-connectiveness of good and evil that exist in everyone and to add a cool effect maybe. :)

science-based reality-check moons
Share
Improve this question
asked May 7 at 21:16 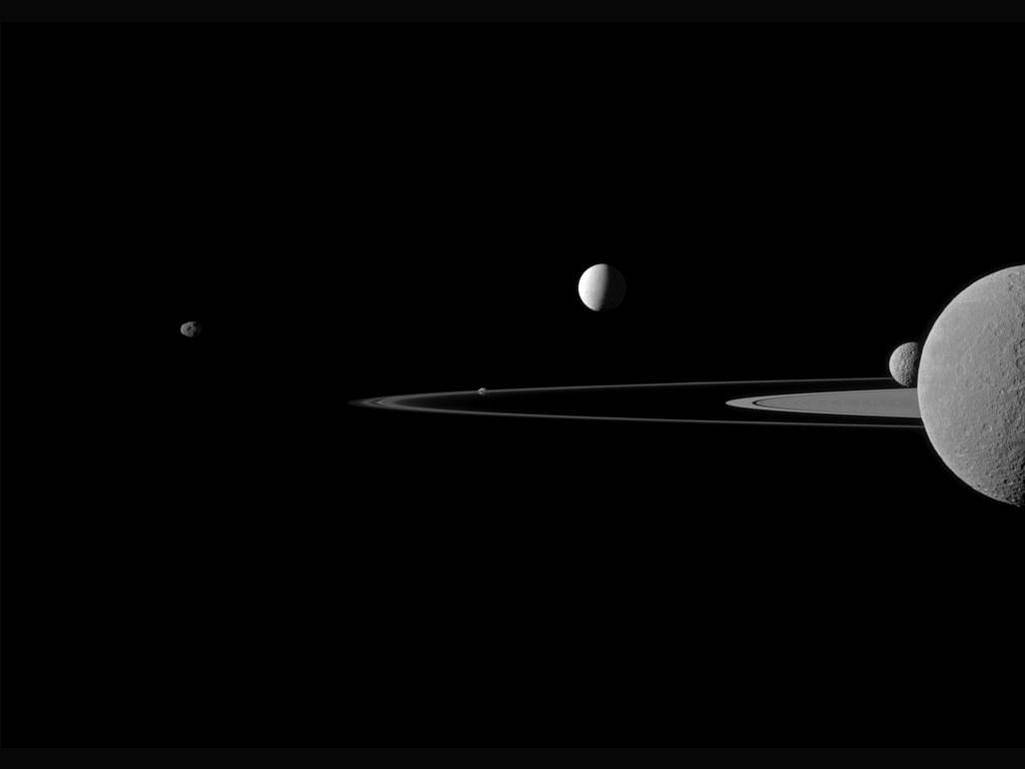 In case you were wondering, all the tax dollars I have ever paid were used to take this picture. I feel good about that! You are all welcome.

SO sweet. Saturn with just 5 of its moons, and 2 of its rings. Showing off, Saturn is. And that big one is just Rhea, not Titan. She is here for her close up.

Saturn is pretty big. But Mars has 2 moons and it does ok so far. I think you can plausibly have 2 moons and a ring on your world. How they affect the denizens of your world can be up to you as the author!

First, two moons can't share an orbit unless they orbit a common barycentre. So they would be a pair moving through the sky, not independent movement. But it's the ring that's the real impossibility.

It is possible to have a temporary ring form, from a catastrophic collision between planetary bodies within the orbit of the moons, but it would only last for a few thousand years. All of this is also dependent on the moons being both massive enough and far enough from their primary to support a ring system. For comparison, our satellite's Hill sphere is only 60000 km across, so even given an event that placed enough debris in it to form a ring, most of the mass of the ring (barring a spectacular coincidence) would be lost to Earth's orbit. And if it were outside the moon's Roche limit, it would coalesce into its own small moon over time.

If both ring systems are similar, they could still be a symbol of unity/symmetry. Despite how different both moons might be, they both have rings, so they do share something. Perhaps the moons (and therefore the good and evil they represent) have more in common than the people realize.

Not the answer you're looking for? Browse other questions tagged science-based reality-check moons .

27
How to effectively and realistically blockade a star system?
7
Hamada this place! Plausibility of hamada desert features in a polar region
12
Single biome (hot) desert planet, possible?
10
Would it be possible for an Earth-like planet to have multiple moons with diverse biomes capable of supporting life?
0
Planet with two moons and rings? Is it possible?
5
What do I bear in mind, creating an earth-like world with TWO moons?