For how much and for how long would a "Closed Cycle Nuclear Thermal Rocket Engine" generate thrust for a floating ship?

The "Closed Cycle Nuclear Thermal Rocket Engine" is just a big nuclear steam engine that in this specific case, uses the (non radioactive) water steam to stay in air, at the height of the clouds, from which it captures the water to refuel its engines (assuming the clouds have enough water for that.

So, allowing for floating steam ships in a way.

A Thermal Nuclear Powered Rocket is basically a open nuclear reactor, where the coolant is heated by the enormous temperatures inside the reactor and expelled at absurd speeds (basically, a very dangerous steam engine). 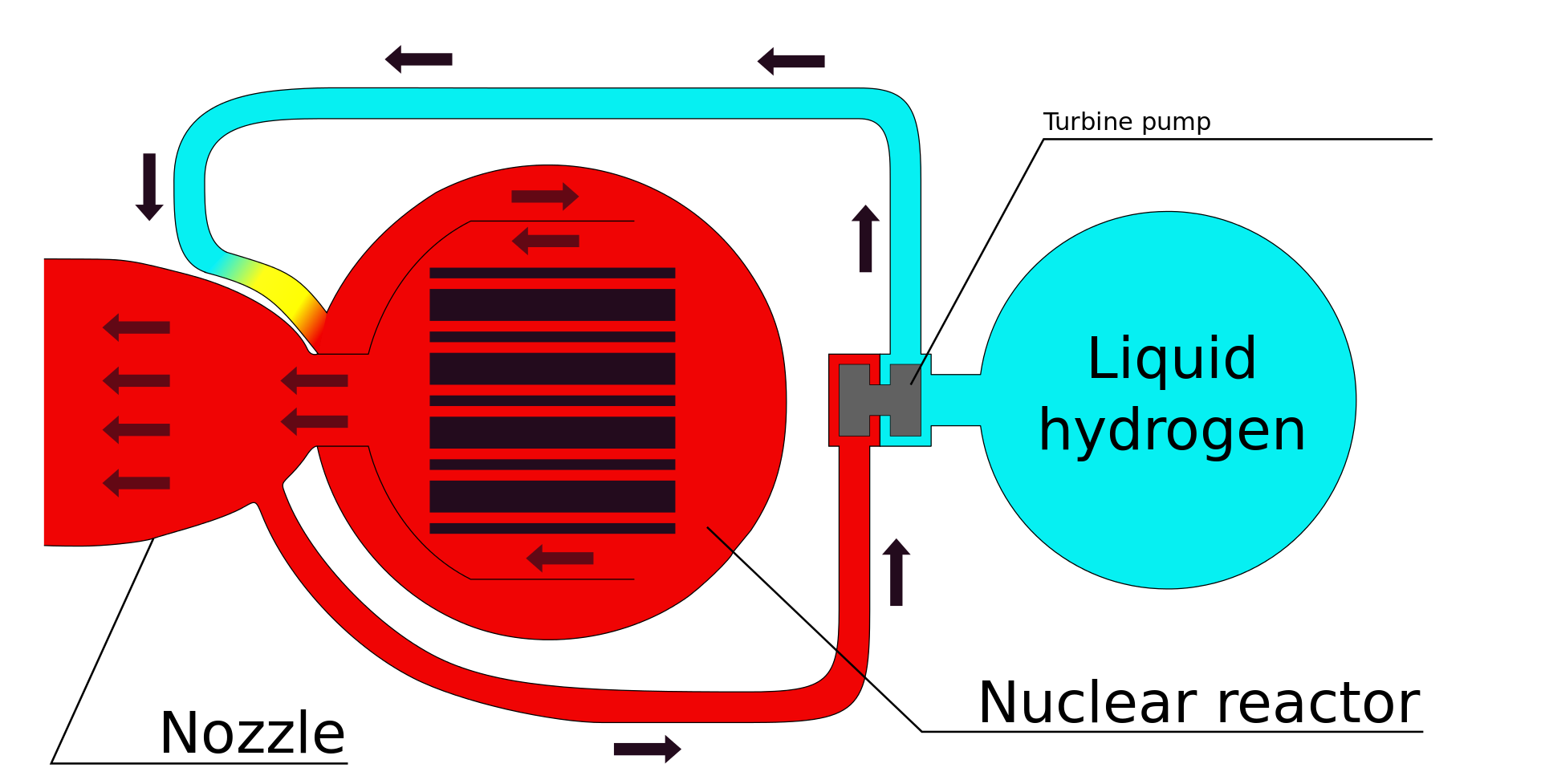 Needless to say, this is a really dangerous way of propelling something on earth because of radioactive contamination, however, it is very safe to use once in space (because the atoms of the coolant are ejected so fast that they escape the solar system).

The solution would be to make a "closed cycle" system, where the coolant of the reactor would be used to heat a secondary coolant/propellant that would be expelled.

The only thing I could find relative to this was the "Nuclear Lightbulb", in which its nuclear core would heat up to 22.000 ºC and would heat the outer coolant/propellant with its hard ultraviolet emissions (thus, the nickname "lightbulb"). It is theorised to achieve a specific impulse (Isp) range from 1500 to 3000 seconds (15-20 kN·s/kg). 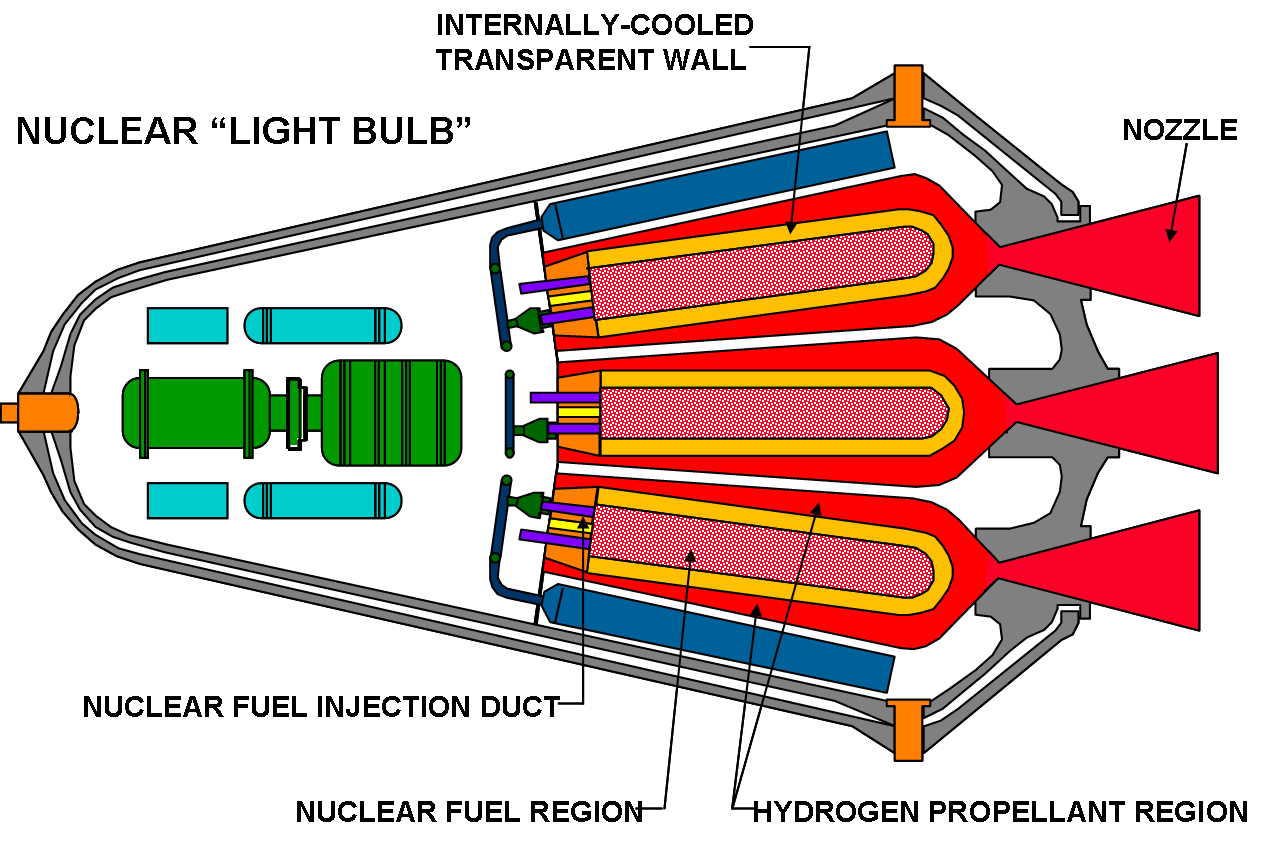 However, I would like to know about the possibility of using the closed cycle with something more akin to the ARE (Aircraft Reactor Experiment), which (I think) would be easier to to build calculate how much and for how long it would generate thrust with only the "steam" of the water of the clouds. 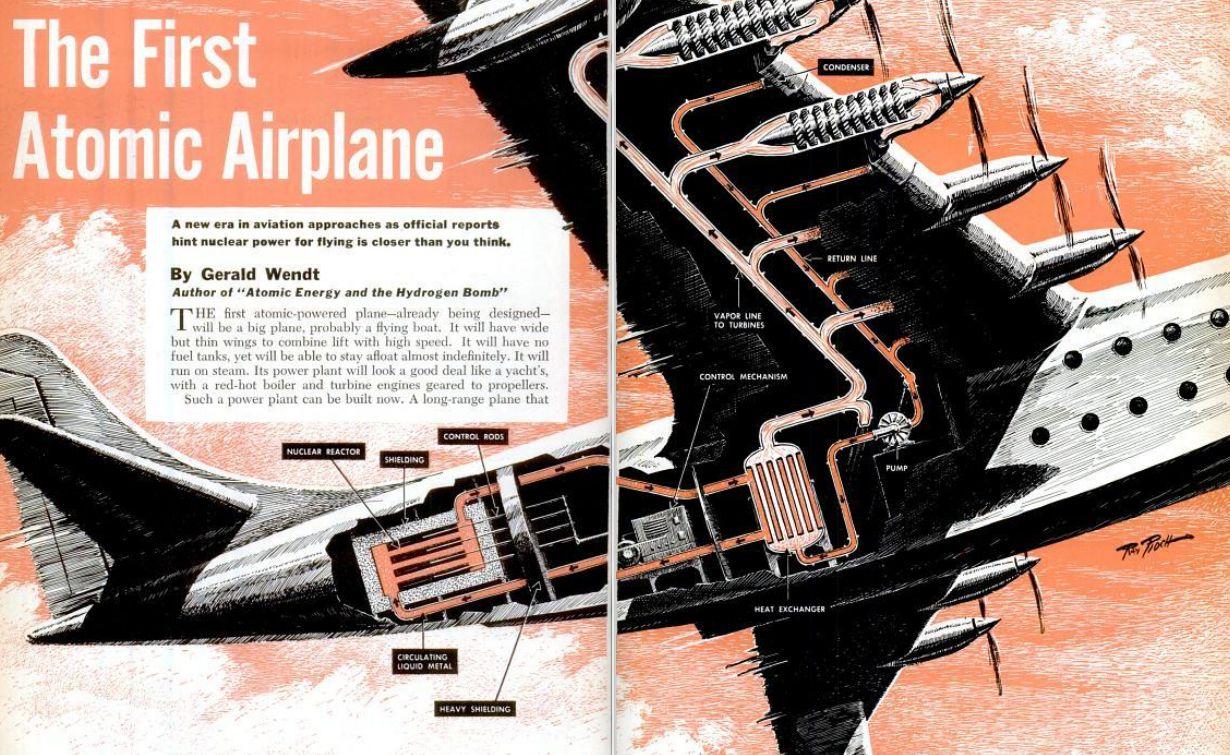 (Illustration of how the ARE works)

The first type of floating ship that I think of would be the "Sevastopol", from the game "Highfleet" since it has all the information necessary (in the link). But in that universe, they use pressurised methane. Of course, this is just an example, if you want to calculate something else of your choice, like a modern cruiser ship, I can't see a problem.

Not with Modern Reactors 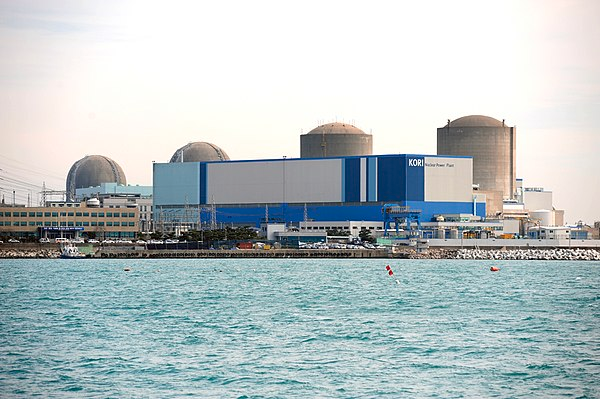 This guy has a bunch of reactors. The biggest one has output of 1400MW. Construction started in 2009 and they turned it on in 2019. So this is state-of-the-art.

General figures suggest nuclear reactors weigh 1000-2000 tonnes. This is a big one so it might be heavier. Let's say it weighs 1500 tonnes.

Let's be generous and say the aircraft weighs 2000 tonnes. That's 1500 tonnes of reactor and another 500 tonnes of engine and bulkhead and fuselage. I imagine this is unrealistic since an aircraft with 3/4 of its mass concentrated in one place will be hard to control.

Putting that aside for the moment, how much energy is needed to get a two kilotonne block of metal into the air?

It seems about 180MW is needed to get a 747 into the air and those bad boys weight about 200 tonnes. Your nuclear sky fortress weighs 10 seven-four-sevens. So it takes 1800MW to get off the ground. This is more than the reactor output. That's a problem.

This of course assumes modern reactors. However that is the only context in which the question has an objective answer.

Who knows -- it might be relatively easy to cut the weight of the Shin Kori-4 reactor by half. I imagine the engineers didn't bother trying, since their nuclear plant was designed as a building and not designed as an aircraft.

But in that case you have your answer. The plane can stay in the air as long as you want, depending on how light you decide the engines are.

We can find out how much water we need to fight gravity by simply dividing gravitational acceleration by the specific impulse. Using your specific impulse of 20 kNs/kg for a closed nuclear thermal reactor, we arrive at 1.76/hr. That is, every hour, you need a mass of propellant equal to 1.76 times the mass of your aircraft. That's a lot. Granted, clouds have a lot of mass, but it would definitely be a logistical headache to collect it. And this doesn't even count the mass of the water stored on the ship, which would quickly snowball into an exponential rocket equation.

So if you're in air anyway, why not just use your onboard nuclear plant to power propellers? It's vastly more efficient in energy and propellant (in that it doesn't require any propellant), not to mention that the people aboard your flying ship will appreciate the ground not constantly rumbling like a magnitude-7 earthquake from your thrusters' vibrations.

How dead set are you on using a nuclear fission reactor? These have several issues which make them unideal for flight with fair amounts of gravity. Daron mentioned how a reactor is incredibly heavy. However, there also is the weight of uranium and of water. Turns out, water is also incredibly heavy, and you'd be using a lot of it for steam thrust.

While this may not be what you're looking for, it may help: Try a fusion reactor instead. While still large and heavy (and experimental irl, we can only make them work with tritium, a hydrogen isotope), the fuel is entirely different. It could intake air from the atmosphere and produce thrust through heat (stars have no problem burning oxygen, carbon, and nitrogen for fuel, and fusion is what they use). This eliminates the need for Uranium or similar metals and of water. Additionally, as hydrogen (probably from water vapor) is input into the reactor, it can output helium which further increases the buoyant force upon your aircraft.

Daron mentioned another major thing: the output of the reactor he presented was 400MW less than the energy required to lift it. A fusion reactor can theoretically produce 3 to 4 times as much energy as a fission reactor for each reaction (does for stars!), meaning one of similar weight would be able to lift itself, and some water if you so chose to use it for steam power.

Basically, if you just swapped your nuclear fission reactor for a fusion reactor, you could possibly achieve near infinite flight, using air as fuel and outputting hotter air with different elements present. Just be careful, as eventually the atoms will try to become carbon and iron, and then you're dusting everything under you in a nice layer of graphite and iron flakes. I suppose in this case, using it to heat water and just outputting that water would be more environmentally friendly.

TL;DR, using a fusion reactor instead of a fission reactor could possibly achieve your goals of flight for an infinite amount of time, or based on how much water you carried if you insist on using steam.

I know this doesn't work exactly with your requirements, but this is the best alternative I can think of that even could fly, as Daron described, a real nuclear reactor couldn't really lift itself at all, so your flight time would be null (no flight was achieved at all).

That was a working engine we can refer to for some specs.

Using water is not viable in the case of yours, clouds do have water, but per cubic meter of air - mass of air is way more than water it contains cloud or not. So a reactive mass it needs to use it the stuff which is there around.

So height limit will depend on density of air, and it will be, probably, few km's or something. It may jump higher but it does not mean it can hover higher.

So model your thing with typical jet engines with mods to them, it just that you do not need the fuel mass for them.

Do not model it after rocket engines, you have a different situation, as you do not need(if you use air around) high ISP, because lower it is, less energy it uses, more efficent it is and higher TWR it can have.

As steam punk plumes - you will have them being in clouds, after that reaftive mass cools down enough down there, so have them as much as you like it.

How long such engine can work, depends on mechanical system resources, but it can have continiuous operation time, indefinitly, if you shut down repair replace some engines, and supply nuclear fuel for it. So once you make everyone busy and tech is mature enough - it years - unitl the hull holds.

If not, but tech is mature enough, a 100 hours between maintanance periods, may be reasonable.(or less depends on tech maturity, or more, depends in complexity of organization of in air repair maitanance, up until decades in air, or if nanothech is there then until there is a fuel it will be in the air)

This would be rather difficult, though not completely impossible.

Water is a terrible rocket fuel in the context of rocket fuels. It's relatively high mass and volume make it rather hard to accelerate to very high speeds. The best specific impulse that you'll get out of steam is around 200 seconds, and that is at a temp of 500c. At 200 seconds to produce the 36000 tons of thrust needed to float the ship means you need to be throwing 180 tons of steam out the back every second. To heat that water to that temperature you'll need a reactor producing 37GW.

This is a rather extreme amount of power, basically requiring that you completely utilize all the energy from a kilo of uranium or thorium about every 35 minutes. (We'll make that 2 kg per hour.)

Now, if you want more power, all you need is denser and more active nuclear fuel. At some point it's so dense it becomes a nuke, but try not to go there. The other issue is temperature. The process of producing that much energy at once creates a lot of heat. The scale of your reactor will be the determiner of how hot the reactor will run, but we're talking temperatures that require handwaved materials to hold. It would also need a constant stream of removing waste and adding new nuclear fuel, since it would be burning through the stuff so fast.

Finally, capturing 180 tons of water per second is gonna be difficult... (That is about the rain of a square kilometer of London over an entire day. Not impossible, just difficult...)

5
How can nuclear power produce -electricity- in space when energy must be converted differently?
42
How can a space station prevent docked ships from irradiating each other or the station?
14
Train-World: Feasibility of radioisotope steam-electric engines
21
Perpetual motion machines and rocketry
2
How much thermal energy, in joules per centimeter squared, is required to ignite common aerospace materials?
5
What type of safety features would a commercial nuclear jet aircraft have?
2
In this alternate history, what great 19th century mind would most likely create the first nuclear powered engine?
3
Is a Nuclear Thermal Propelled Submarine Possible?